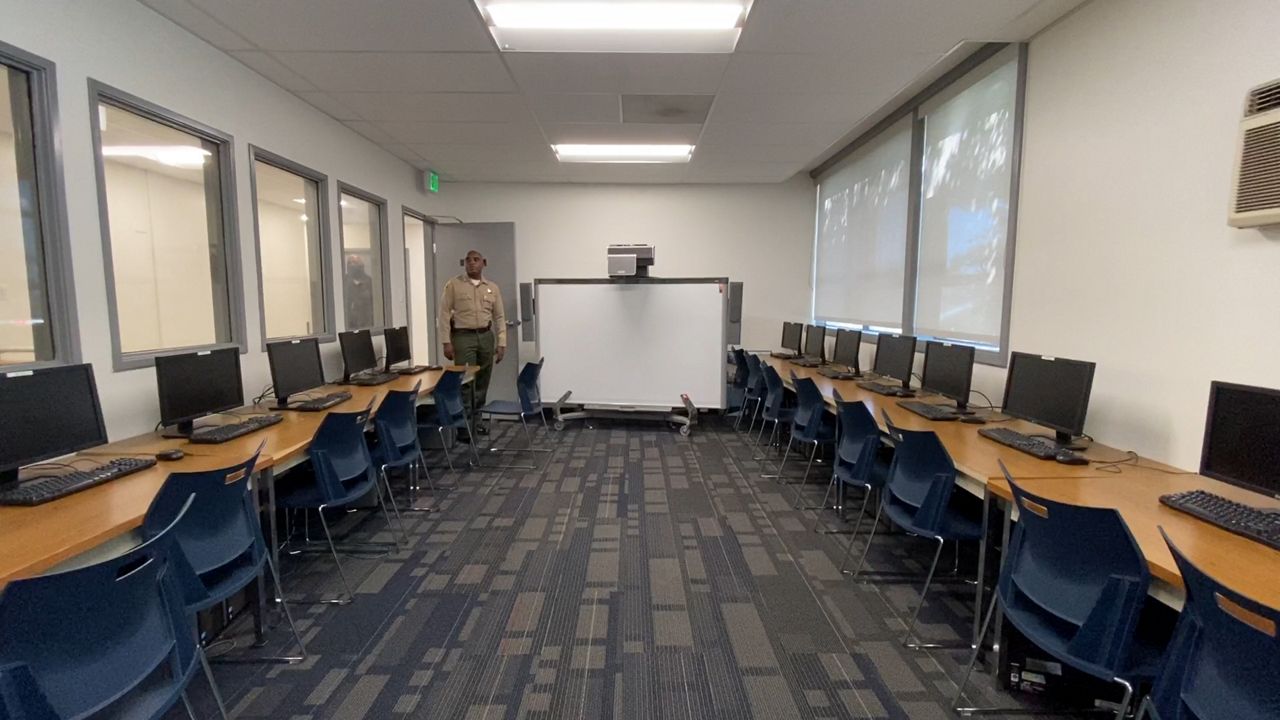 SOUTH LOS ANGELES – More than 150 children who used to spend their afternoons at the Robert Irmas Youth Center in West Athens have had nowhere to go since the center shut down in February. The closure wasn’t spurred by Covid-19 restrictions, but by budget cuts to the Los Angeles County Sheriff’s Department, according to Captain Duane Allen who runs the center.

“It’s dollars and cents,” Allen said. “There’s just no way I could do anything about it. If I could, I would because this program has been so near and dear to me for so many years.

Out of 16 Sheriff’s youth programs in L.A. County, the Robert Irmas Youth Center is one of the biggest. The building is named for the former deputy who donated the building and started a family foundation to support it.

It’s located about a mile from where two deputies recently shot and killed Dijon Kizzee, igniting protests at the South Los Angeles sheriff’s station. Deputies have arrested dozens of protesters in recent weeks, but while they dressed for battle – the conflict goes all the way to the top.

Sheriff Alex Villanueva says the Board of Supervisors is underfunding his department by $400 million, leading to critical cuts in essential services.

In a statement, Supervisor Mark Ridley-Thomas, who represents West Athens and Westmont, said the sheriff has failed to balance his budget:

“It is regretful that the Sheriff has made the choice to cut youth programs in his time of curtailment rather than carefully analyzing his overspending and cutting elsewhere. The Sheriff has repeatedly failed to balance his budget. All county departments are faced with the same harsh economic reality yet the Sheriff continues to deflect.”

"This is even more disappointing given the fact that my office just allocated millions of dollars in discretionary funds to facilitate a comprehensive renovation of the facility. This is an unfortunate reflection of the Sheriff's priorities. This program is worthy of financial allocation and it is my hope that the Sheriff will rethink his approach and make this a priority. These centers are an opportunity to build bridges between law enforcement and the community, and clearly the community of Athens needs this now more than ever."

Whoever is to blame, it’s up to Captain Allen to maintain mandatory minimum patrols in some of South Los Angeles’ most dangerous neighborhoods.

“Our resources and patrol are already at a minimum. We can’t go any lower,” Allen said.

So, instead of hosting 150 kids a day, the facility sits empty – including computers with internet access, athletic facilities, a skate park and soccer field. A membership there was just $35 a year.

For mother Maria Camacho, the center gave her five daughters stability when they lost their apartment. Even when they slept in their car at night, the girls could go to the center during the day and feel like ordinary kids.

“This is the place you want children to come so they can be led into the right path,” Camacho said. “This is a second home to many kids.”

To Allen, her message hit hard in a summer full of hard hits.

The center is more than an empty building – it’s another broken bridge between law enforcement and the community.