Kenosha Looks to Heal Without the National Spotlight

KENOSHA, Wis. — It’s been a week since protests erupted here after a police officer shot Jacob Blake, who is Black, seven times at close range, throwing this quiet lakeside city into the national debate on systemic racism and policing.

A shooting incident on August 25 in which a 17-year-old with an AR-15 left two dead and one injured pushed Kenosha deeper into the national discourse about guns at protests and America’s intensifying political divisions.

With the national spotlight on Kenosha now for nine days, many here are frustrated. What they want, many said, is to start healing their city without the rest of the world looking on.

“Because we didn't have a contingency plan to actually jump in there and form a narrative that we wanted, we let everybody else form the narrative around us. And it was ugly,” said Roy Peeples, a pastor at the Turning Point Life Church. “The world has now found us in a place where we did not want to be.”

The protesters, who have taken to the streets here every night since Blake was shot, have said it wasn’t the first time police have used excessive force on people of color in Kenosha or anywhere else in America without accountability.

People here said they are still angry at the police. They want straight answers from law enforcement and the government about what happened that evening Blake was shot. 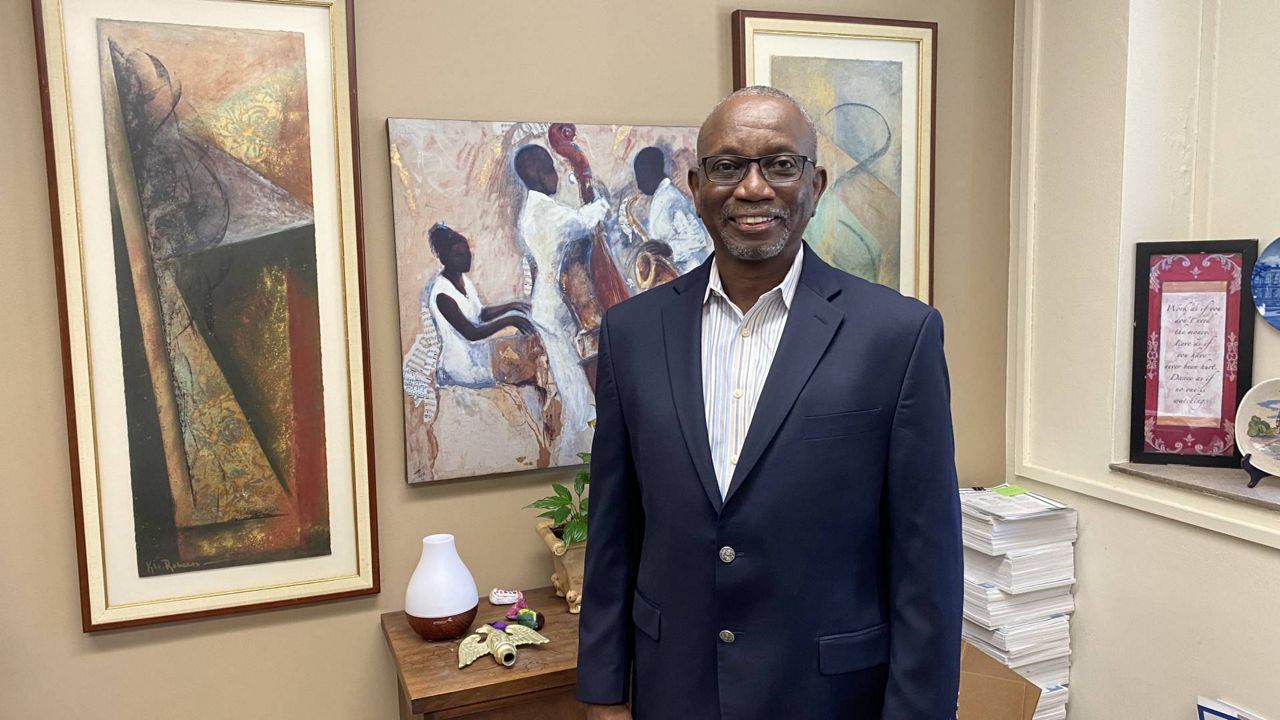 Roy Peeples is heading up a Kenosha task force on racial injustice. Peeples, who is a pastor at Turning Point Life Church, said it was time Kenosha took control of the city's narrative. (Spectrum News/Sabra Ayres)

Many were incensed when they learned Friday that the Kenosha County Sheriff said he had not seen the graphic video showing police officer Rusten Sheskey shooting Blake seven times in the back as Blake tried to get in his SUV.

“That video is all over the internet. How could he say he hasn’t seen it? Come on,” said Kenosha resident Belinda Perez.

Many Kenoshians said they were anxious about their community’s future and want to start moving toward change. How to do that is on everyone’s mind.

“Everything seems so unfair,” Perez said. “The police are always getting away with whatever they want to do. And no one asked for this rioting and destroying our downtown.”

Kenosha’s economy was once driven by the automotive industry, with several major car-making plants employing a large part of the population. Over the years, the car industry moved out, taking many jobs with them. Jockey International and Snap-on Incorporated are now headquartered here.

Today, Kenosha is a sleeper community for Chicago, about 65 miles to the south. Its Lake Michigan shores have drawn summer visitors and commuters alike.

Downtown Kenosha was “totally dead” for years, according to Perez, but recently the city has done a lot to revitalize the commercial area and bring in customers.

That downtown vitality was crushed over the course of one night, as rioters smashed commercial storefronts, forcing businesses to close.

Late last week, the city’s commercial downtown and uptown areas, which were also hit by riots, saw teams of volunteers come out to paint boarded windows with bright colors and encouraging slogans of peace. Some eateries and businesses started “soft openings” for a few hours, closing before the citywide curfew that has been in place for a week.

If change comes, it’s going to come from the people – not the government or the mayor and certainly not the police, said Nina Nieves, who painted a Bible scripture on a piece of plywood covering the window of the church building just three blocks from where Tuesday night’s shooting occurred.

“Unity has to come from the people. I don’t see it happening any other way,” Nieves said.

Peeples noted that the protesters rallying every night against police brutality and racial injustice don't trust any institutions now. “You see these young people right now, they are crying out to be understood," he said. "They're crying out, ‘Please. No more of this. We can't take it.’”

Peeples is leading a commission tasked with examining issues of racial equality in Kenosha. Mayor Antaramian initiated the task force in May, just after protests erupted across the country in the wake of the killing of George Floyd by police in Minneapolis.

Peeples said the task force was just setting into motion the skeletons of a plan called Commitment to Action, bringing together community leaders in business, nonprofits, and faith-based organizations when Blake was shot.

Even before Blake’s shooting, Kenosha was watching as cities across the country erupted in protest after protest. Peeples said he knew how important it was to get the committee up and running as quickly as possible.

“We warned the mayor that it would come to Kenosha. It was just a matter of time,” he said.


Most Kenoshians are convinced that the violence that happened after peaceful protesters had left the Civic City Park was perpetrated by outsiders coming into the city to wreak havoc.

“They came in here and destroyed places that low-income and disadvantaged communities need to survive,” said David Montgomery, pastor at the Kingdom Word Global Impact Ministry Church on 22nd Street. The church was spared from the rioting, but all around it, the shops and stores were either gutted by fires, or their windows broken and interiors smashed.

“I don’t like the looting, but I understand why they are doing it,” said Renee Wilson, 41. “They are trying to show just how angry they are. I don’t like it, but in a way, I see their point.”

Peeples said the lesson for the city was to understand why the rioting and looting were happening.

Denis Nelson has owned a strip of commercial business properties on 63th Street in uptown for 28 years. In the last several years, Nelson and other area businesses have tried to work to make the area a safe commercial center by creating community-oriented street festivals – like an old car show – that would bring in businesses and families.

“This was a high-crime area, but we were making progress in uptown,” Nelson said. “This place has so much potential. But now, uptown is destroyed.”

Nelson and Peeples were meeting to discuss potential coordination with the mayor’s task force. Business leaders in Kenosha play an important part in the city’s focus on creating racial equality because they're the ones who provide the jobs and the livelihood, Peeples said.

Building solutions in Kenosha will mean coming at the issue of racial inequality from all sides, including housing, policing, education and economics, he said.

Faith will play an important part of that solution, too, Peeples said. “The first thing we did, we boarded up, right? But that shows hopelessness and despair,” he said. Faith-based organizations like his are working with the community to bring people together.

Outside on 63rd Street, where Peeples and Nelson were meeting with other local business owners to discuss future projects, teams of volunteers had set up plastic tables to distribute water and food for volunteer clean-up crews sweeping up glass from the sidewalk or painting the side of now-closed businesses, and for anyone else who needed it.

Across their t-shirts, Kenosha’s newest slogan was written in large black letters: #KenoshaStrong.