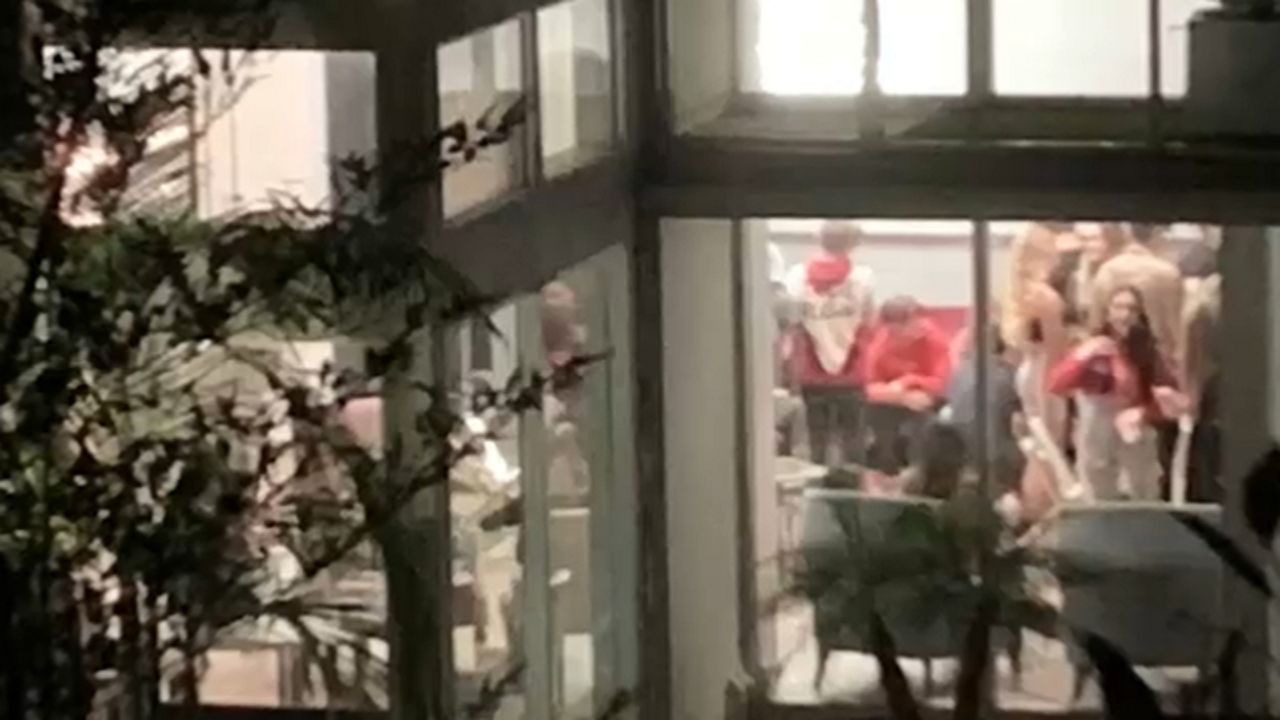 ENCINO, Calif. — Every day feels like a losing battle for Jeff Okun and his neighbors, who say their quiet Encino street has been taken over by a TikTok party house.

Day and night, Okun said swarms of young people take over the home next door to him and hold large gatherings, loud pool parties, and non-permitted film shoots.

“The entire situation makes me very frustrated," Okun said. "I feel very powerless. They had a party for nine consecutive nights that went from 10:30 p.m. to literally 7:30 a.m.”

Okun shared footage with Spectrum News 1 from his Nest cam capturing the parties spilling into the street. The party goers can be seen drinking, getting intimate, and even defecating right outside his home.

Okun’s neighbor, Marsha Scully, has lived on the street for 50 years and lost her patience with the young influencers who she feels have invaded her neighborhood. She said that every morning, she now finds used condoms outside her house.

“It’s disgusting. We’re prisoners in our home. We’re in our 70s, we don’t want COVID,” Scully said. “It’s a disappointment in our city leaders. We pay taxes and we expect to be heard.”

Both Scully and Okun say they’re not being heard. They’ve been calling the LAPD, their councilman Paul Koretz, Mayor Eric Garcetti’s office, and the health department to no avail.

Okun said he and his neighbors are also trying to help the property owner attempt an eviction, which has been difficult to achieve due to the pandemic eviction moratorium. Okun said nothing has worked and he feels like officials just punt the responsibility.

“The eviction attorney gets them the health violations the police won’t enforce. The police are having to battle with the city government because of the defunding. The councilman told us to give it to the police,” Okun said. “We’re just going in giant circles.”

Councilman Koretz was not available for an interview, but a representative from his office said he is doing everything he can to help the residents, and sent a letter to the LAPD asking for full enforcement and zero tolerance on house parties.

LAPD told Spectrum News 1 it has responded to two incidents at the party house address in Encino, and that no large gathering or party was observed when they arrived. No arrests were made and no citations were handed out.

“The days of being proactive, I think are gone,” said retired LAPD detective Moses Castillo, who said he’s not surprised that police aren’t breaking up this Encino party house or other party houses in L.A.

Castillo said to look no further than the movement to defund police.

“The officers have heard the message. You want us to have hands off, let the social workers or non-sworn individuals go out there and do enforcement, code enforcement, that’s what it’s going to be,” Castillo said.

Castillo spent 30 years in the LAPD and remains close with many active members. He said police are now less likely to get involved unless it’s a so-called “Part I crime,” like a robbery, rape, or murder.

“I believe there’s a stand-down. It’s not worth it,” Castillo said. “We’re public enemy number one. We’re damned if we do, damned if we don’t. So I believe this is what you get. The fact that officers aren’t heavy-handedly going in there to care of business is what the public is actually crying for.”

Okun is worried that a tragedy needs to happen before the parties at the house are finally stopped.

“There’s already been a gun pulled. There’s been brawls in the street. It’s just a decaying situation,” Okun said.

Earlier this month, Mayor Garcetti called the growing problem of party houses “night clubs in the hills,” and said he would authorize the city to shut off water and power to combat the gatherings.

Okun and Scully said that has yet to happen at this home and they’re unclear why after all their complaints.

“We really just need the mayor to take action, do what he said he’s going to do, and stop making the LAPD their gate keepers,” Scully said.

Spectrum News 1 tried to reach the property owner about these issues, but did not hear back.

Meanwhile Okun said he and some of the other neighbors have tried to reason with the social media influencers and the manager who run the parties in the home. They said the responses have been disrespectful.

“[One of the men] basically just called us names and told us to go do ourselves,” Okun said.

Spectrum News 1 tried to reach out to the influencers hosting the parties, as well as their manager, but they didn’t want to talk or share their side.

When we visited the house, one of the young men seen in the TikTok and Instagram videos taken at the residence came outside at one point, but refused to be interviewed on camera. When asked about the parties, he said there had been none, adding, “We’re just kids.”

Okun said he is all for the young influencers gaining online followers and monetizing their personalities, but feels his sense of peace at home shouldn’t be destroyed in the process. He thinks locations used for this kind of purpose should be reserved for commercial zones and not quiet neighborhoods like his.

“We’re for them, we want them to get sponsors and make gazillions of dollars, but we’re not for them doing it at everybody’s expense,” Okun said.