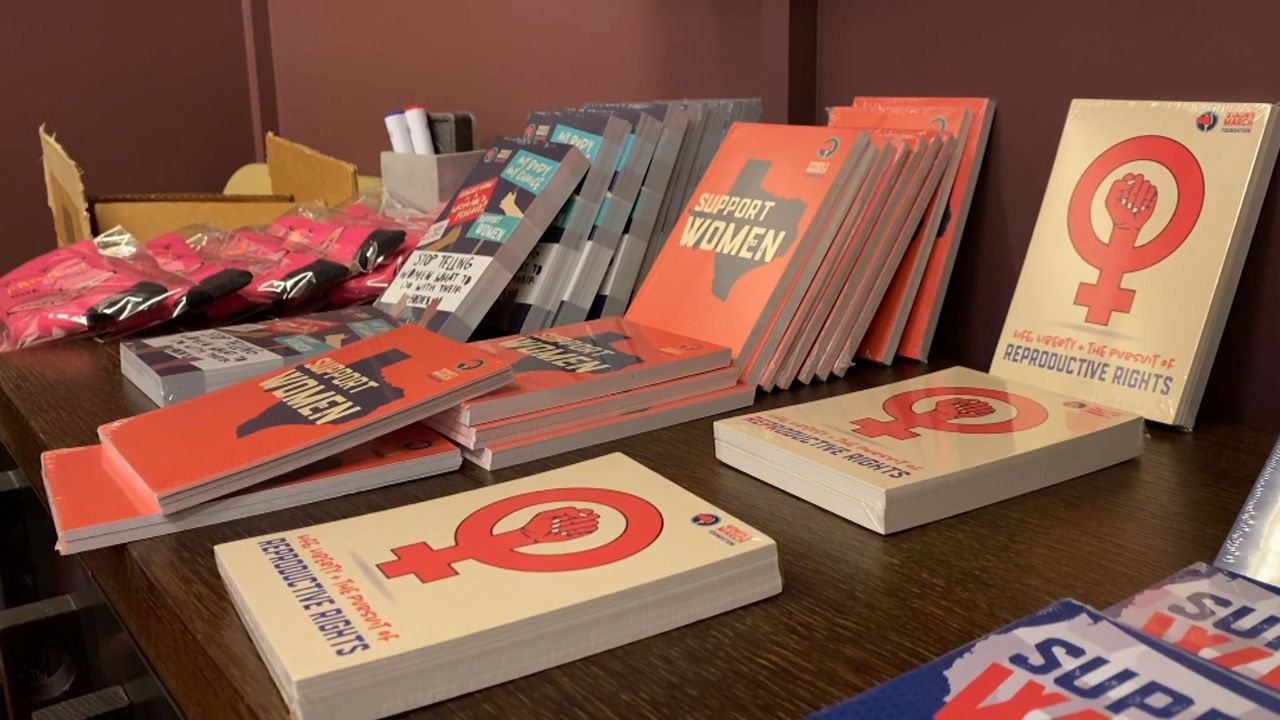 The Women’s March Foundation has mailed out more than 250,000 postcards from members across the nation all asking Texas-based corporate CEOs to denounce SB-8. (Spectrum News 1/Aziza Shuler)

LOS ANGELES — Her passion for women’s rights has galvanized millions to march in major cities across the nation, and the movement Emiliana Guereca founded in 2017 continues to grow each year.

But annual marches are just the entry point to activism. Guereca says the real impact and legacy comes from the work the foundation does on a daily basis.


In September, Texas Gov. Greg Abbott signed SB-8, a law that comes nearly 50 years since Roe v. Wade and imposes some of the nation’s tightest restrictions on abortion. It bans the procedure after six weeks of gestation and also creates liability for anyone involved in the process.

“Women from across the country wanted to know, where do the employers stand on this, because they have power," Guereca said. "So we really looked at all of the companies that are in Texas and are the biggest employers of women. These companies have power based on the money and what they bring to Texas.”

To bring attention to what SB-8 means for women who may work at those companies, Guereca launched the nationwide postcard campaign My Body My Choice with the help of the volunteers from Grassroots Democrats HQ.

The Women’s March Foundation has mailed out more than 250,000 postcards from members across the nation, all asking Texas-based corporate CEOs to denounce SB-8. Women around the country share their own personal connection to reproductive rights handwritten on each postcard.


Tamara Melzer Levenson with Grassroots Democrats HQ shared her personal abortion story for the first time. Nine years ago, she had a surprise pregnancy and didn’t actually find out until she was in a car crash. Complications from the accident put a difficult decision before her.

“What would I need to do in order to get healthy, for my leg to be able to walk on it again, for my arm to be OK," she said. "So I made the really difficult decision for myself and decided the right thing for me to do at the time was to have an abortion.”

Melzer Levenson had access to the procedure at a doctor's office in California. Meanwhile, this same right is being taken away from women in Texas.

“It’s time for me to be one of the people who speaks up because if we don’t speak up, the woman next to you is probably somebody who had an abortion, who had something that happened in their life and had to make a choice, and we need to have that choice,” she said.

Guereca added that this isn’t just a fight for reproductive rights but also a demand for equality in health care.

“What does it look like for a Latina woman or a Black woman to have access to health care? And abortion is health care,” Guereca said.