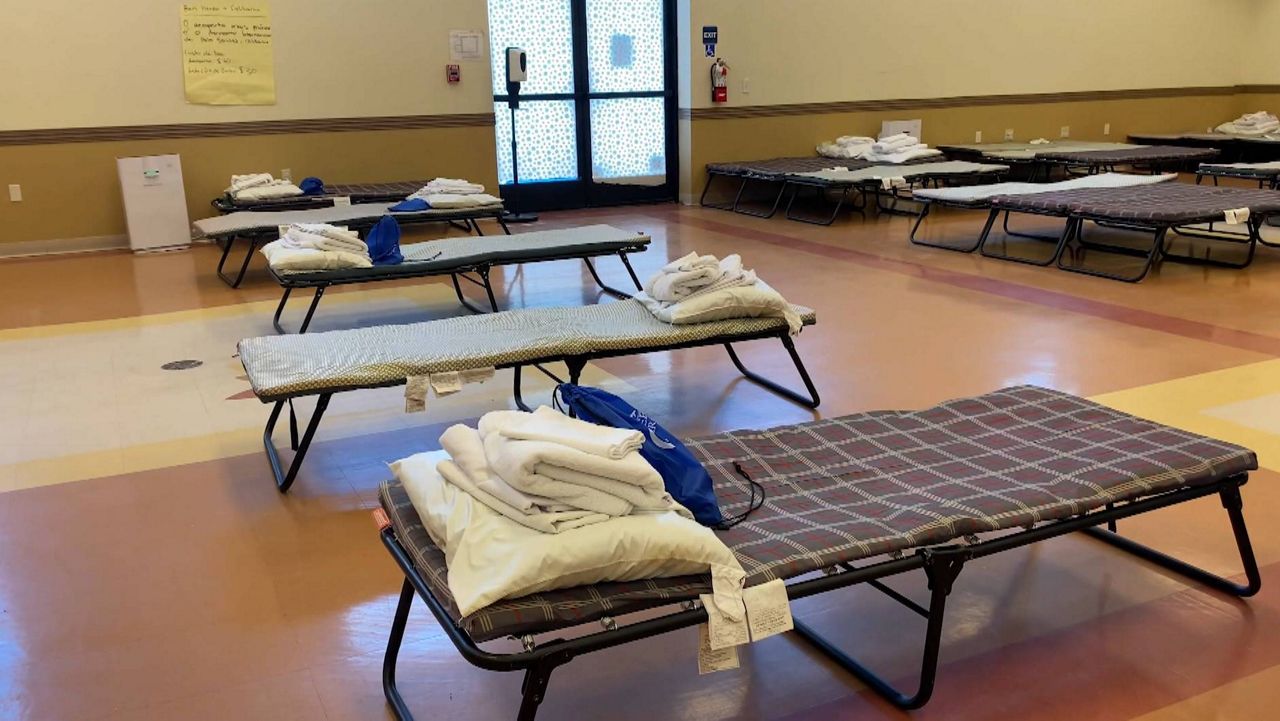 Galilee Center provides food, shelter, clothing and other services to migrants after being released by immigration authorities.

COACHELLA VALLEY, Calif. — There was a race against time this week at Galilee Center in the Coachella Valley as it prepared to house asylum seekers recently released by immigration authorities.


"We want to be ready ahead of time and prepare cots," said Claudia Castorena, the founder and CFO of Galilee Center.

On the day she spoke to Spectrum News 1, Castoreno said the small shelter was expecting 17 people from Murrieta and a bus with 35 people arriving from Yuma. All of the arrivals were expected within hours of each other.

"They receive a clean pillow, pillowcase, clean towel and a set of sheets," Castorena said, adding she came to this country as an undocumented immigrant.

She said she is doing God's work, but not even a prophet could have prepared her for the latest immigrant surge.

"In the 30 years of providing social services and human services in the Coachella Valley, I've never seen it this way," she said.

Last year Galilee Center received a total of 125 migrants. Since March, they have been receiving that many every two or three days.

Analysis from the Washington Post shows that this year has seen a seasonal bump of migration and demand from migrants who were not allowed in last year due to the pandemic.

Castorena has hired 18 new people in the last few weeks to help, but it has not been enough.

When the asylum seekers arrive, they look exhausted. They all have ankle monitors provided by immigration authorities.

"Welcome to all of you. This is a Catholic shelter. We have no relation with immigration authorities," Castorena tells the group in Spanish.

In the group is Gabriela, 21, who is a mother. She said coming with her 2-year-old daughter was risky, but staying in Ecuador under the abuse of her relative was riskier.

"It was a hard decision. Coming with my daughter was hard because sometimes we had nothing to eat, nothing to drink, and she would ask for water or food, and I had none to give her," Gabriela said in Spanish.

Gabriela said one of the things that shocked her the most from her weeklong journey was the number of people trying to come to the U.S.

"There were a lot of people, a lot of migrants trying to get here. The ticket system for the bus had collapsed from all the people," she said.

Gabriela and the other migrants will be at Galilee Center less than 24 hours, just long enough to shower, wash their clothes, eat, sleep and book the last leg of their trip.

Hours later, a new set of buses will arrive to start the process all over again.

"We are helping, little by little," Castorena said. "Even if it is one family at the time, that gives me a certain way of comfort in knowing that we made a difference for one family."

For information on how to help the Galilee Center, visit their website.