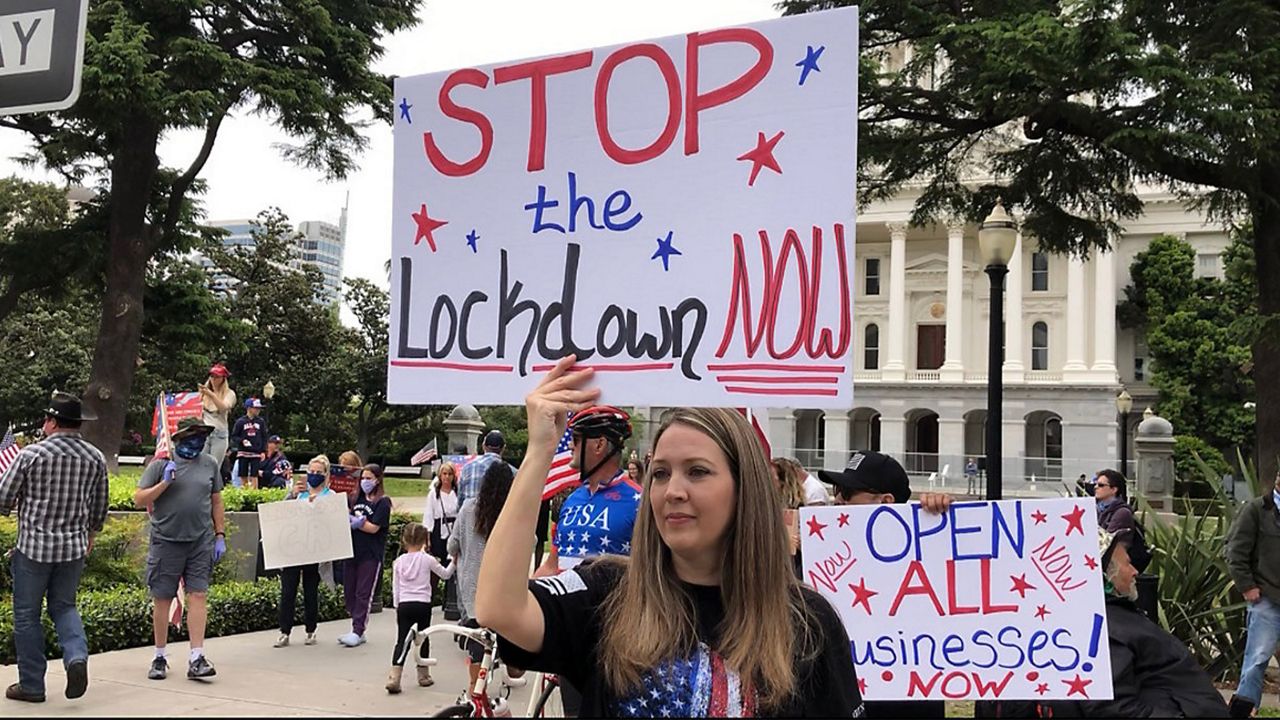 SACRAMENTO  – Despite Governor Gavin Newsom banning large gatherings last month, hundreds of people showed up to the California State Capitol Monday to express their frustration about the coronavirus restrictions that have forced thousands of businesses across the state to shut down.

The protest in Sacramento was one of several ‘operation gridlock’ demonstrations that have been taking place all over the country in recent days.

“Let people get back to work so they can stop incurring debt...stop causing stress on their families, and just allow the virus to do what it’s supposed to do, which is infect the healthy people and develop herd immunity,” said Blair Morrison, a protester from Folsom, California.

Morrison was one of hundreds of demonstrators calling on Newsom to lift the statewide stay-at-home order, which requires non-essential businesses to stay closed.

“We’re strong healthy people, so if we do get sick, we can recover and it’s better for the group as a whole if we do,” Morrison responded when asked if he was concerned about people not standing six feet apart from each other.

The small business owner, says he’s done his part by closing his gym and staying home for several weeks, and believes it’s time for the governor to do his by allowing the economy to reopen.

A lot of demonstrators are passing by in their cars, while others stand close to each other holding flags and signs. pic.twitter.com/DdnCXAdshv

Despite this message from the governor, protesters rallied close to one another without any facial coverings. Newsom reassured them he’s committed to opening the state again, but reiterated that California is not out of the woods yet.

“We are deeply focused on what that reopening looks like, we just want to do in a very deliberate and thoughtful way to keep those protesters safe and to keep their families and the broader community of California safe,” Newsom said.

Morrison stated he wasn’t worried about him or his family getting sick after attending the protest, where social distancing was not practiced.

“The fact that we’re in open air, that’s pretty good for respiratory viruses like this one,” Morrison added.

According to an analysis from the National Academies of Sciences, Engineering and Medicine, the coronavirus that causes COVID-19 may spread through the air in tiny particles that infected people exhale while breathing or talking.

The event was organized by Freedom Angels, a group of anti-vaccine activists that led a series of protests at the capitol last September. The rallies were in response to a new state law that makes it more difficult for people to exempt their kids from mandatory vaccines.

As for Monday’s event, Officer Rick Turner with the California Highway Patrol’s Capitol Protection Section, said, “CHP is going to take this experience into account when considering permits for this group or any other group.”

Turner said the permit for 500 participants was approved with the understanding that it would be conducted in a matter that was consistent with California’s public health guidance.

Despite people disregarding orders to not gather in large crowds, Turner said no arrests or citations were made.