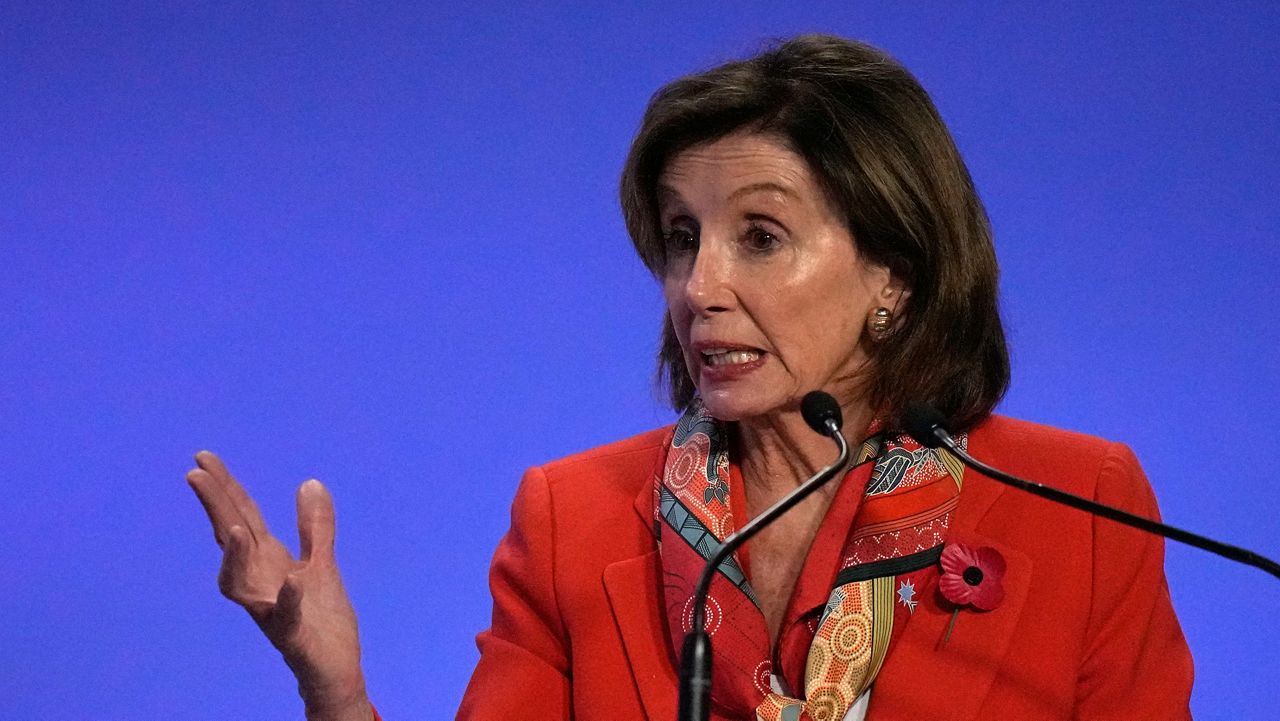 Speaker of the United States House of Representatives Nancy Pelosi gestures as she speaks at a press conference during the COP26 U.N. Climate Summit in Glasgow, Scotland, Tuesday, Nov. 9, 2021. (AP Photo/Alastair Grant)

House Speaker Nancy Pelosi and several of her fellow Democratic lawmakers traveled to the COP26 climate summit in Glasgow, Scotland, with one purpose: To show that "America is back" on the world stage to help combat the climate crisis.

“Led by our delegation, the United States Congress is showing the world true climate leadership,” Pelosi said at the conference. “We’re proud of our president. He was one of the first people in Congress, in 1986, to introduce legislation to address the climate crisis. He takes great pride in that he’s worked on it ever since.”

Pelosi touted the nearly $2 trillion Build Back Better bill, which the House aims to pass the week of Nov. 15. The California Democrat called the bill – which includes $550 billion to combat the climate crisis, the largest such investment in U.S. history – the "most ambitious and consequential climate and clean energy legislation of all time."

"We know that and we come here equipped, ready to take on the challenge," Pelosi said of the fight against climate change. "To meet the moment."

"Our congressional delegation comes here fresh from advancing ... the most ambitious and consequential climate legislation," Pelosi told reporters Tuesday, adding: "Our legislation is far-reaching, ensuring that the future economy is greener and cleaner."

"That means $250 billion in clean energy tax credits to develop and deploy the latest in future generations of clean power,” Pelosi continued. “That means over $100 billion in addition for resilience including climate-smart agriculture and nature-based climate solutions, another $100 billion toward local- and region-led climate solutions, and over $222 billion for environmental justice.”

Pelosi reiterated that the House will vote on the bill the week of Nov. 15

"That is our plan — to pass the bill the week of November 15, as is indicated in our statements that were made at the time of passing the infrastructure bill," she said.

But one member of Pelosi's caucus said that the U.S. needs to back up its words with action: New York Rep. Alexandria Ocasio-Cortez, one of Congress' most staunch climate activists.

At a panel Tuesday with other Democrats who were swept into Congress in 2018 on platforms emphasizing far bigger U.S. efforts on climate, Ocasio-Cortez said that "we have to draw down emissions to get credit for being committed on climate change. It’s really that simple."

Ocasio-Cortez, did, however, credit Biden with waging a high-stakes fight to get the climate legislation through Congress. But she urged that future U.S. climate action include grassroots advocates, benefit working people and marginal communities, and create jobs, she said.

“We’re not just back," Ocasio-Cortez added. "We are different."