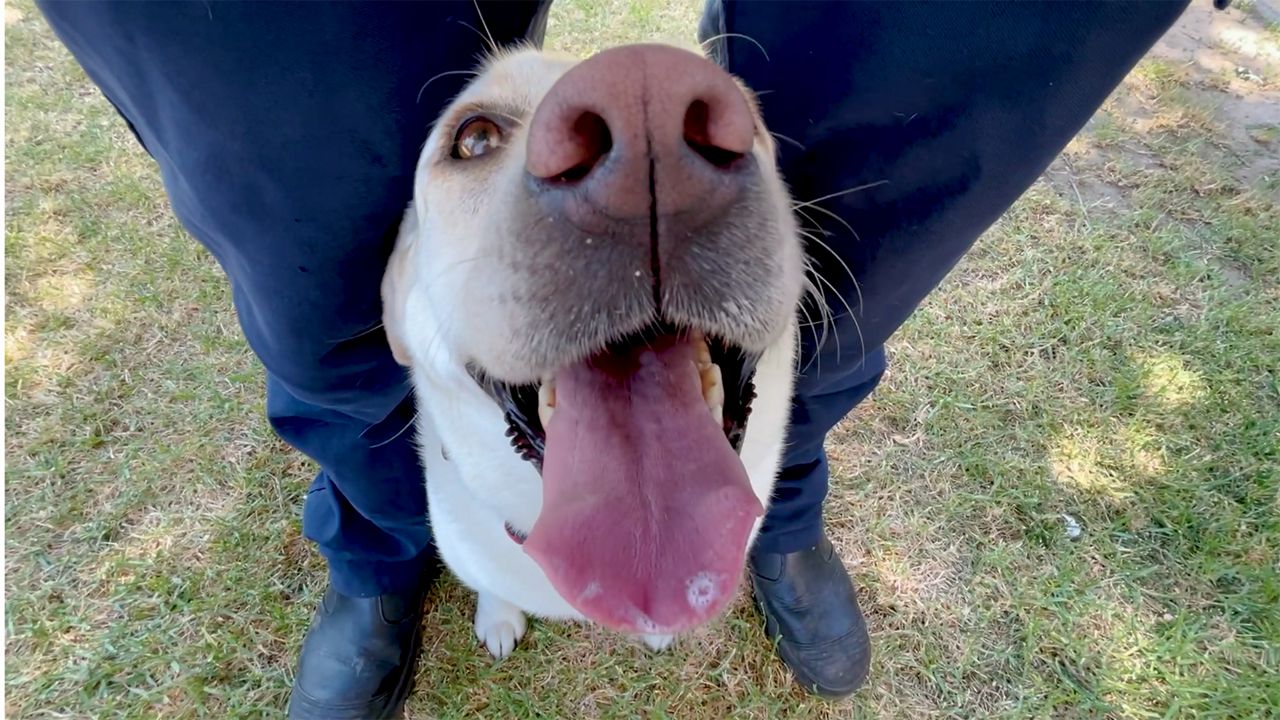 New leash on life: Why firefighting dogs are making a comeback

SANTA CLARITA, Calif. — Most dogs know a trick or two, but in Santa Clarita, we found a Labrador named Echo, who has one that can bring even the toughest firefighters down to their knees every single time.

“It’s one fell swoop,” said Echo’s handler, firefighter Jake Windell. “She’ll be standing on all fours and [all of a sudden] she’s just on her back, ready to go, and I think it’s hard for anybody not to smile when they see a dog on their back waiting for a belly rub.”

Echo is not just any dog. She’s an employee at Fire Station 107. Her job is to put smiles on firefighter’s faces — and it's safe to say that she's really good at it.

“I think we’ve all had that experience of going home after a rough day and the dog is just excited to be there,” Windell said. “When Echo does that with our crews it just gets our spirits up a little bit.”

Dogs and firefighters go way back — to the days of horse-drawn fire engines, when Dalmatians would help guide the horses to the fire.

But now, fire dogs are making a comeback. According to a study cited by the International Association of Fire Fighters, about 20% of firefighters and first responders in the U.S. deal with post-traumatic stress disorder at one point — three times that of the general population.

Echo is one of two full-time therapy dogs at the Los Angeles County Fire Department trained to help firefighters with job-related anxiety.

“We are the people that others call for for help,” Windell said. “One of the biggest problems we have is asking for help ourselves. And so, that’s what we’re trying to do with peer support… let people know that it’s OK not to be OK.”

The station’s captain, John Rossi, explained how the last year had been particularly hard on his crew. Having Echo around helped boost morale.

"The pandemic was a challenge for all of us, as individuals, family members and coworkers, and we’ve seen since then a rise in mental health issues where our firefighters were struggling," he said. "To be able to have Echo here and actually see her help our own people has been amazing."

On a balmy Monday morning, Echo made a house call at Fire Station 150 to check up on Mark Torres.

On June 1, Torres was working the command center when an off duty firefighter killed a coworker and wounded another — all before going to his nearby home, setting it on fire and taking his own life.

Torres had the unenviable job of answering a call from the shooter’s mother, asking whether her son had survived.

Torres was having a rough time, and that's when Echo showed up, rolled over and showed him her belly.

“She was at the briefing that day, and she made her rounds,” Torres recalled.

That’s when Torres noticed her making a beeline toward him.

Since the shooting, Torres been dealing with sleepless nights and anxiety, which is why he looks forward to Echo and her visits.

“It takes you away from everything,” he said. “For me she’s just in instant stress-reliever. She puts a smile on my face.”