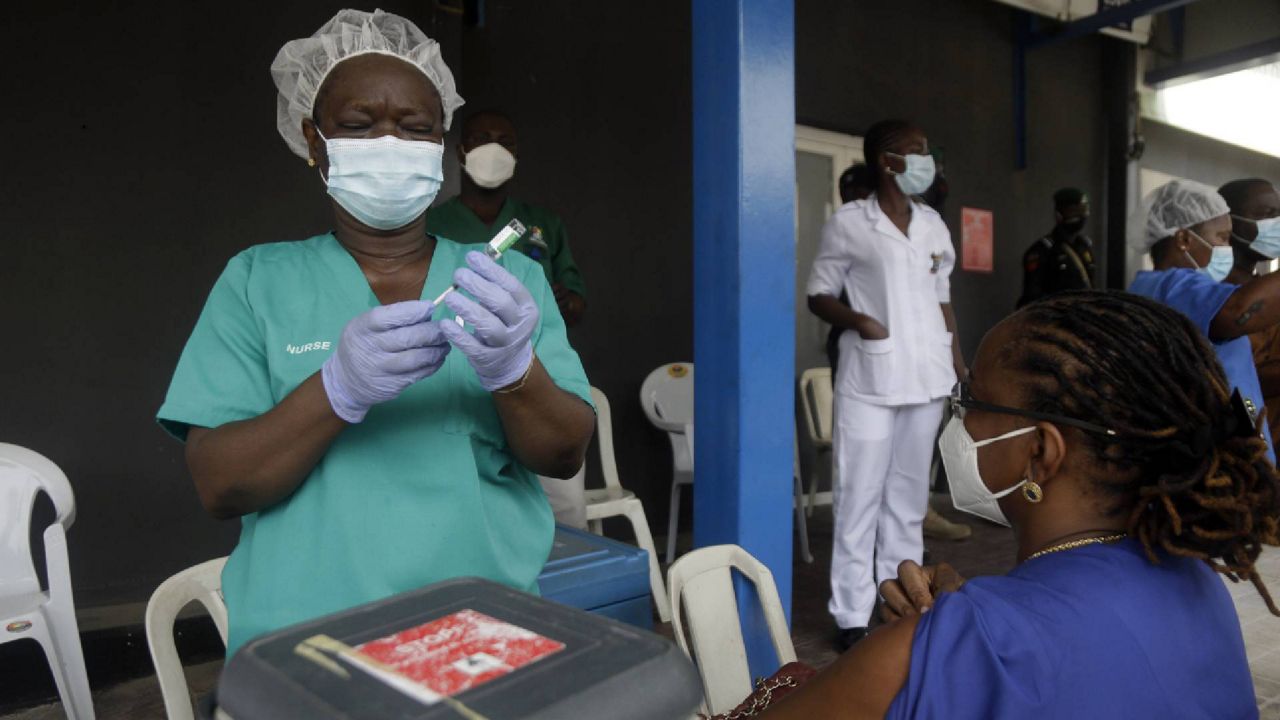 FILE - In this March 12, 2021, file photo, a woman waits to receive one of the country's first coronavirus vaccinations manufactured by the Serum Institute of India and provided through the global COVAX initiative, at Yaba Mainland hospital in Lagos, Nigeria. (AP Photo/Sunday Alamba, File)

The United States outlined Thursday its plan to share vaccines with the world, including specific details on how the first 25 million doses will be distributed across the globe.

President Joe Biden has already committed to sharing 80 million doses of vaccine by the end of June, a quarter of which will go to countries with immediate need and the rest of which will go to COVAX, a global partnership with the World Health Organization to distribute shots around the world.

The first wave of shared doses will be a combination of Johnson & Johnson, Pfizer and Moderna, a White House official said Thursday morning. About 60 million produced AstraZeneca doses are still under review and have yet to be authorized for release to other countries.

To start, nearly 19 million doses will go to COVAX, including 6 million for South and Central America, 7 million for Asia and 5 million for Africa. Another 6 million will go to “regional priorities and partners,” including places like Mexico, Canada, West Bank and Gaza, South Korea and United Nations frontline workers.

The first doses were already “in the air” as of Thursday’s COVID-19 briefing, where officials detailed the new plan. The initial wave of 25 million will focus on frontline and health workers, according to a White House fact sheet.

“It's fair to say that we're far ahead of where anyone thought we would be in our fight against the virus. And importantly, we have secured enough vaccine supply for all Americans,” said Jeff Zients, White House COVID-19 Response Coordinator.

Health experts around the world have warned that the 80 million doses promised by the U.S. won’t be nearly enough to vaccinate the hundreds of millions who still don’t have access in their home country.

Dr. Marcella Nunez-Smith, the Chair of the White House COVID-19 Health Equity Task Force, told Spectrum News' Samantha-Jo Roth on Thursday that "the commitment on the global front in no way affects the domestic supply of vaccines."

National Security Advisor Jake Sullivan also spoke about the plans on Thursday, promising more from the U.S. in the future.

“This is only the beginning. The President is committed to sharing doses on an ongoing basis,” he said. “We also know that this won't be enough to end or reduce the lifespan of the pandemic. And that's why we're working with allies and partners to expand the production of vaccines and raw materials, including here at home.”

President Biden has called on the country to be the  “world’s arsenal of vaccines” in the coming months.

Vice President Kamala Harris also spoke Thursday morning with the presidents of Mexico and Guatemala and the prime ministers of India and Trinidad and Tobago about the plan to share U.S. doses. The vice president will travel to Guatemala and Mexico next week as part of her continued diplomacy in the region aimed at addressing the root causes of migration.

To date, the U.S. has already shared 4 million doses of the AstraZeneca vaccine with Canada and Mexico.