Demonstrators try to open a door of the U.S. Capitol on Wednesday, Jan. 6, 2021, in Washington. (AP Photo/Jose Luis Magana)

As Lawmakers Call For Investigations, A Closer Look at How Security Failed to Stop Capitol Breach

EDITOR'S NOTE: National Washington Correspondent Em Nguyen reviews what took place at the Capitol Building. Click the arrow above to watch the video.

As a violent mob of the president’s supporters pushed past officers guarding the Capitol Building, making it all the way to the chair in the Senate chamber where Vice President Pence sat just minutes before and vandalizing the office of the House’s top Democratic leader, serious questions were raised about the preparation and response from the U.S. Capitol Police, who are responsible for the building’s security.

On Thursday evening, a spokesperson for the Capitol Police said that Chief Steven Sund would resign effective Jan. 16.

Experts were quick to question police leadership, but they warned not to blame individual officers, who were clearly overwhelmed and outnumbered by the thousands of rioters who surrounded the Capitol building.

What remains unanswered is why Capitol Police did not have a more comprehensive plan to stop the large protest from intruding, especially once they successfully breached the doors of the People’s House, roaming the halls inside.

Throughout the day, lawmakers on both sides of the aisle and Washington, D.C. Mayor Muriel Bowser called for investigations into the police response and for the capitol's security leadership to resign. The House Sergeant-at-Arms, Paul Irving, was the first to step down Thursday afternoon.

“Yesterday represented a massive failure of institutions, protocols, and planning that are supposed to protect the first branch of our federal government,” Senate Majority Leader Mitch McConnell (R-KY) said. “A painstaking investigation and thorough review must now take place and significant changes must follow.”

“Obviously, it was a failure,” Mayor Bowser said. “There's going to have to be a real investigation into what happened.”

On Wednesday, the first signs of a threat were clear on the West side of the Capitol Building shortly after 1 p.m., when Congress began its joint session to count electoral votes and affirm President-elect Joe Biden’s win.

This reporter watched as one rioter from Tennessee named Brian, who declined to give his full name, called out for people to crowd the steep Capitol steps, where scaffolding for Biden’s upcoming inauguration stood at the top.

“Move forward!” he yelled to hundreds of people trickling in from the National Mall.

Several dozen people climbed the scaffolding, waving “TRUMP” flags and hanging banners on the sides. Only a few dozen police officers stood at the top, outnumbered by the crowd that had gathered on the steps below and surrounding walls. 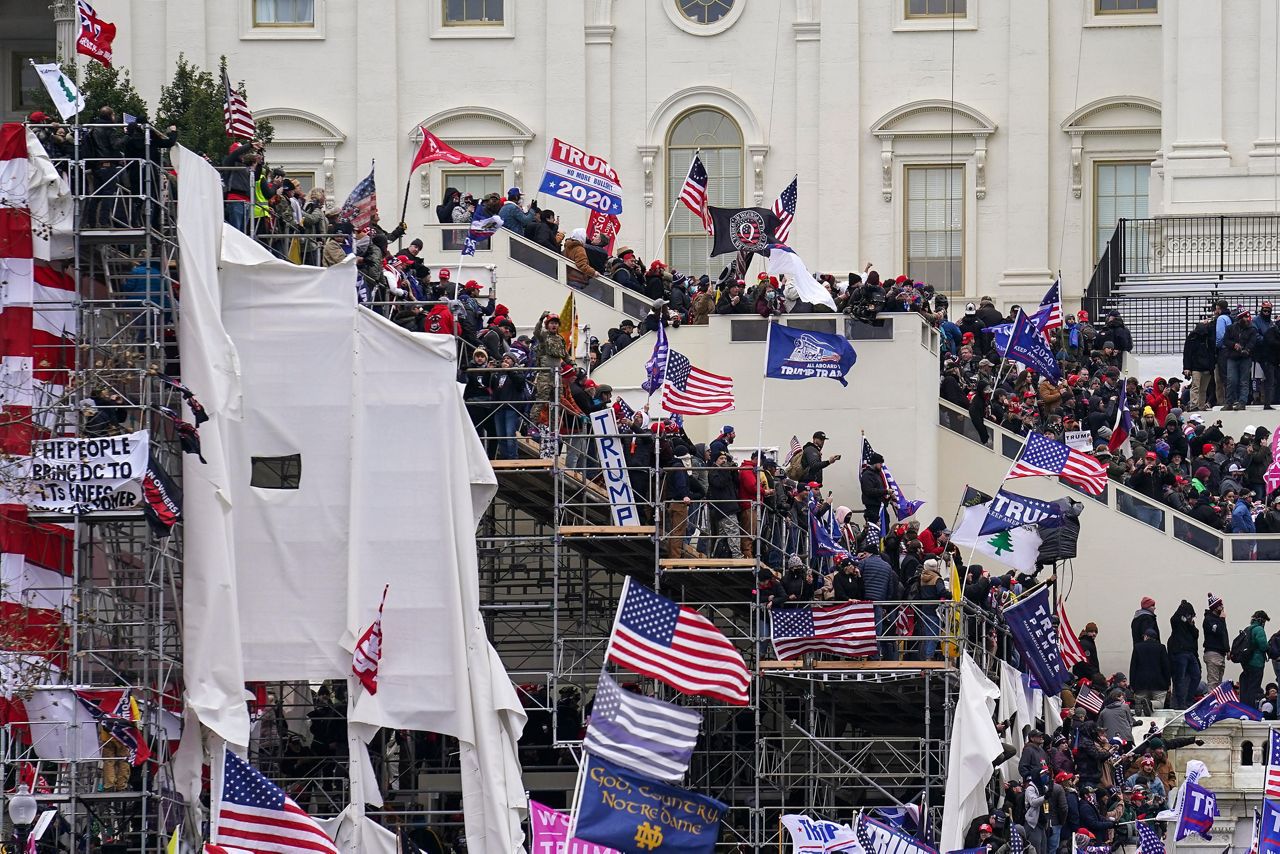 Trump supporters gather outside the Capitol and on inauguration scaffolding. (AP Photo/John Minchillo)

“We just want them to know that we’re here. There’s an honest group of people here,” Brian said shortly before the building was breached.

The crowd cheered at loud, booming sounds coming from the top of the scaffolding, apparently flashbangs, though it was unclear at the time whether police or rioters fired them.

Shortly before 2 p.m., on the other side of the capitol, hundreds of rioters pushed over low metal fencing set up about 50 yards away from the building’s steps, causing the few dozen police officers in the area to step back and begin guarding the steps themselves.

Soon, those officers were also overwhelmed, disappearing into hundreds of rioters that slowly crowded and covered the Capitol’s steps. The majority were not wearing helmets or riot gear.

“They were really caught,” said Dr. Scott White, Director of the Cybersecurity Program at George Washington University and a law enforcement consultant. “They should not have been in a situation where one or two officers were confronted by hundreds.” 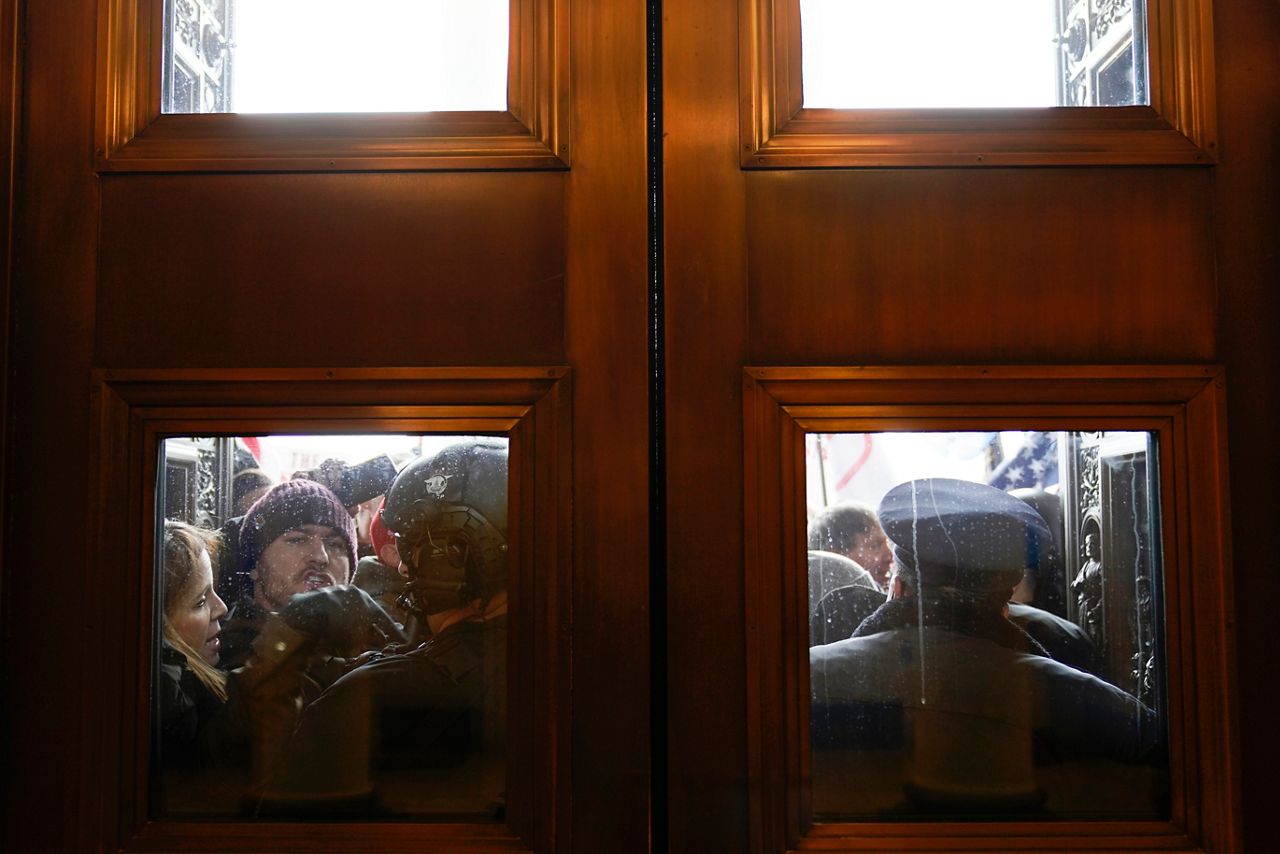 U.S. Capitol Police try to hold back protesters outside the east doors to the House side of the U.S. Capitol. (AP Photo/Andrew Harnik)

The Capitol Police had not asked for federal help, instead leaving up to their own officers. The force has over 2,000 officers, but it's not clear how many were working on Wednesday, though at least some were also responding to reports of two bombs and a suspicious vehicle in the area.

Sund said his team was conducting a review of the day’s events, and he praised his officers’ work given the circumstances.

“The violent attack on the U.S. Capitol was unlike any I have ever experienced in my 30 years in law enforcement,” he said. “The actions of the USCP officers were heroic given the situation they faced.”

Still, Dr. White said that the invasion was predictable from posts on social media and the President’s encouragement earlier in the day, without a need for sophisticated intelligence.

“Anyone can see this one coming,” he told Spectrum News. “I don’t understand how ill-prepared they were.”

The first breach seemed to happen on the South side of the Capitol Building, which was sparsely manned. The mob broke windows and scattered into the halls, Speaker Pelosi’s office and onto the Senate floor. 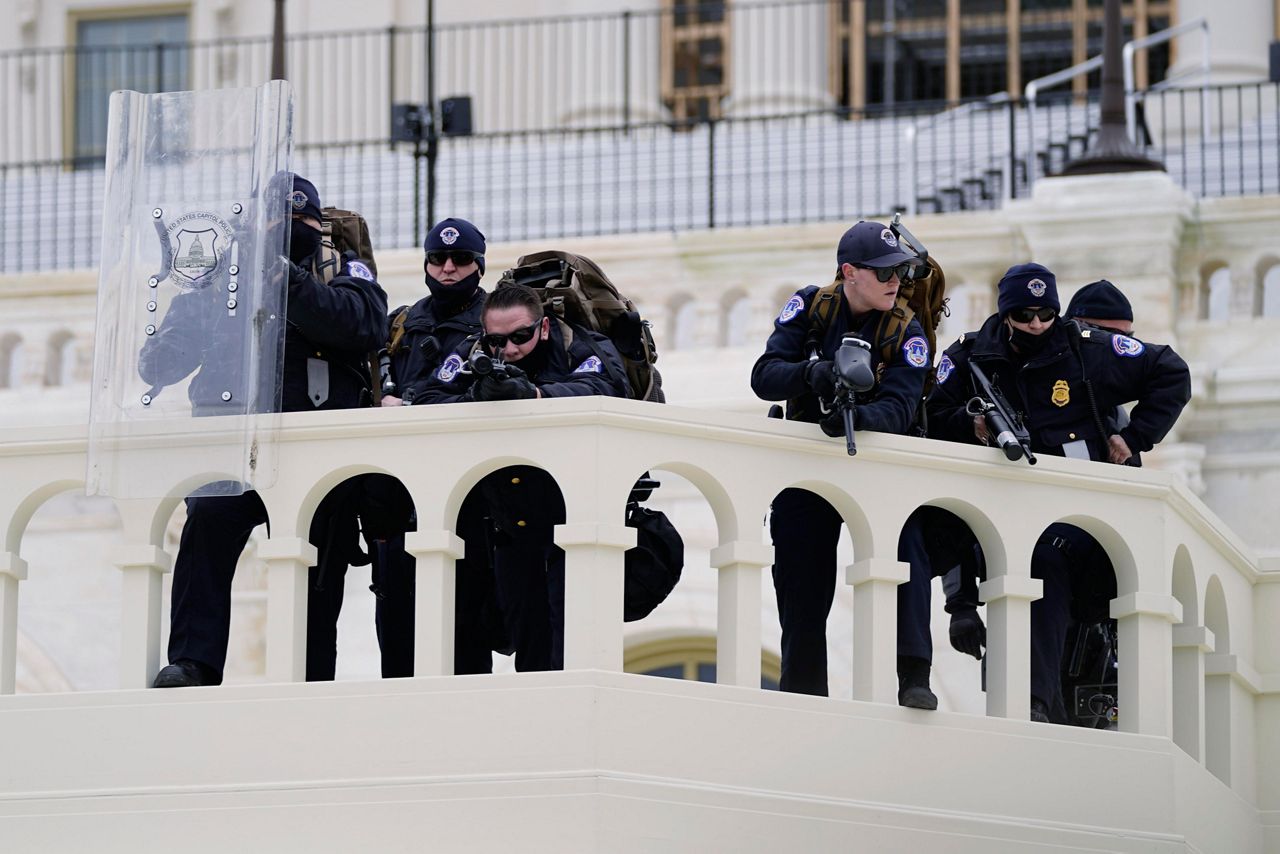 Police keep a watch on demonstrators who tried to break through a police barrier. (AP Photo/Julio Cortez)

Chief Contee said the Metro Police Department was not called for backup until after 1 p.m., when large crowds had already formed outside the capitol doors.

They arrived in waves, most after 2 p.m., and they began patrolling the building in heavier gear. On Tuesday, D.C. had already activated its entire police force in advance of the planned protests, but they do not have jurisdiction over federal property.

“I want to start this morning by thanking the members of the Metropolitan Police Department,” Chief Contee said Thursday. “When U.S. Capitol Police called for assistance, it was you that answered their call without hesitation. Your actions to restore democracy were nothing short of heroic.”

Once hundreds of rioters pushed their way inside, some officers pointed their guns and yelled at them to leave or get down, but again, there wasn’t enough law enforcement to push the crowd out of the building, despite the fact that U.S. lawmakers had been forced to evacuate their chambers, hiding in their offices and other secure locations.

“Any time you attempt to stop the legal operations of a democratic government, then you’re falling into the category of terrorism,” Dr. White said. “They were very lucky that that was not an armed insurrection.”

One officer said they had to let the intruders “do their thing,” according to the New York Times, while others took selfies with them.

The National Guard wasn’t activated by the president until around 3:30 p.m., and they eventually surrounded the Capitol by nightfall, sealing it off from the outside.

D.C. officials had activated the city’s own guard earlier in the week, but they couldn’t send in troops without a federal order.

How Did We Get Here?

Wednesday’s response and the absence of the National Guard is in stark contrast to the response to racial justice protests in early June following the death of George Floyd.

At the time, the president called in hundreds of troops and federal officers in riot gear, who deployed throughout the district despite the fact that protests were largely peaceful.

“We need law and order,” President Trump said then.

In the first days of June, a photo of D.C.’s guard standing on the steps of the Lincoln Memorial in a show of force went viral. The day before the photo was taken, federal agents assaulted peaceful protesters while the president walked to a church outside the White House for a photo op.

What makes Wednesday’s intrusion even more shocking is the fact that, due to the pandemic, the entire capitol complex has been closed to visitors for months and under tight security. Lawmakers, staff and press have to show their credentials to enter any part of the building, and many entrances are closed down.

Even without pandemic restrictions, security is fairly strict, and the public can only enter the Capitol Building through the Visitor’s Center to get inside. Typically, only lawmakers and essential staff are allowed on the House and Senate floors, while press is only allowed in the galleries above. 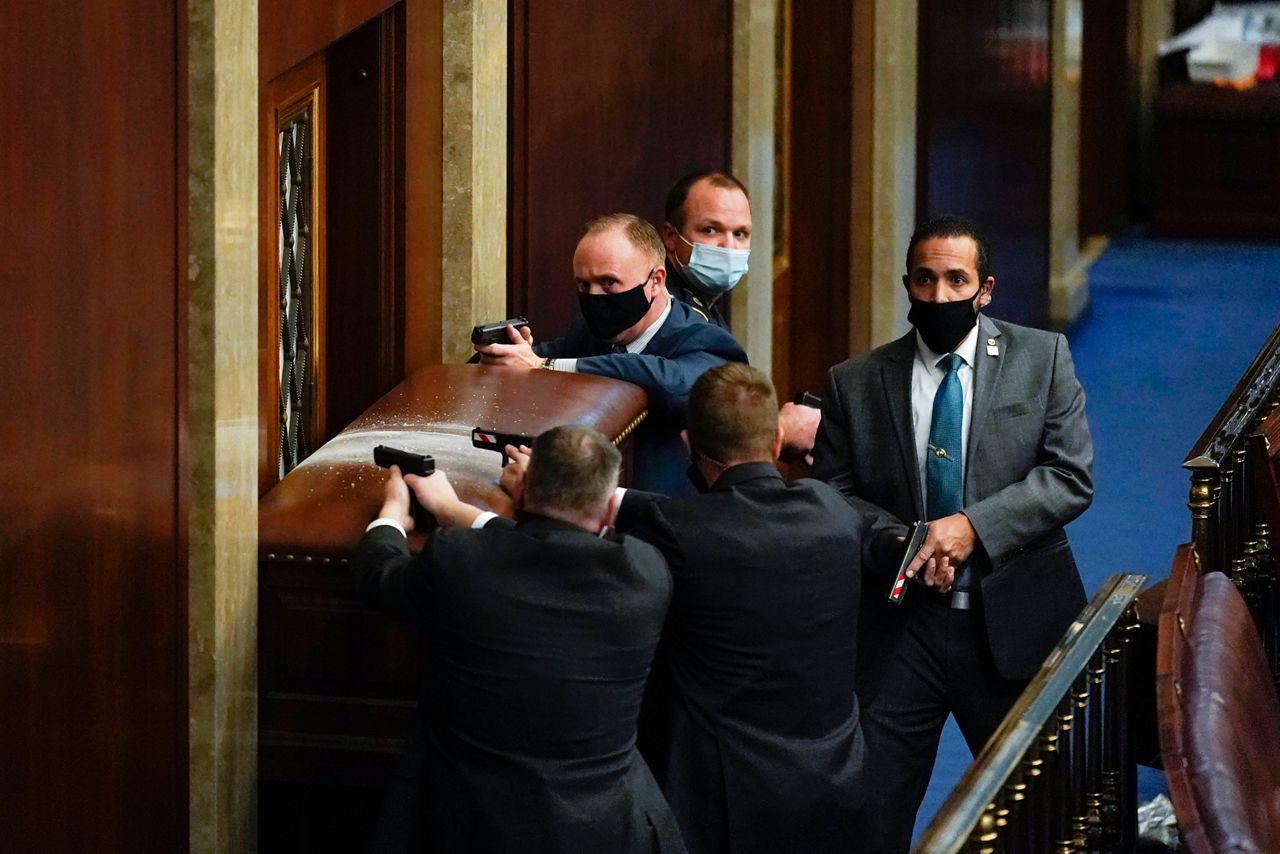 “The Legislative Branch Appropriations Subcommittee, which funds the Capitol Police, is robustly investigating yesterday’s events, including with hearings to directly question key leaders about what went wrong,” Representative Tim Ryan (D-OH), who oversees the committee, said in a statement Thursday.

The Capitol Police receive hundreds of millions of dollars each year to protect the Capitol Building and its surrounding complex. For 2021, Congress appropriated more than $500 million of funding to the force.

On Thursday morning, D.C. officials started erecting a seven-foot tall black fence to surround the capitol, similar to the one surrounding the White House since this summer’s protests. Mayor Bowser said the fence would stay up through President-elect Biden’s inauguration.

Both the F.B.I. and D.C. police are looking for members of Wednesday’s mob in order to make more arrests. The city’s police department posted photos of suspects online, asking people to submit information that could help identify them.

On Thursday, Michael Sherwin, the U.S. attorney for Washington, D.C., said that “all options are on the table” for charging the intruders, including sedition.