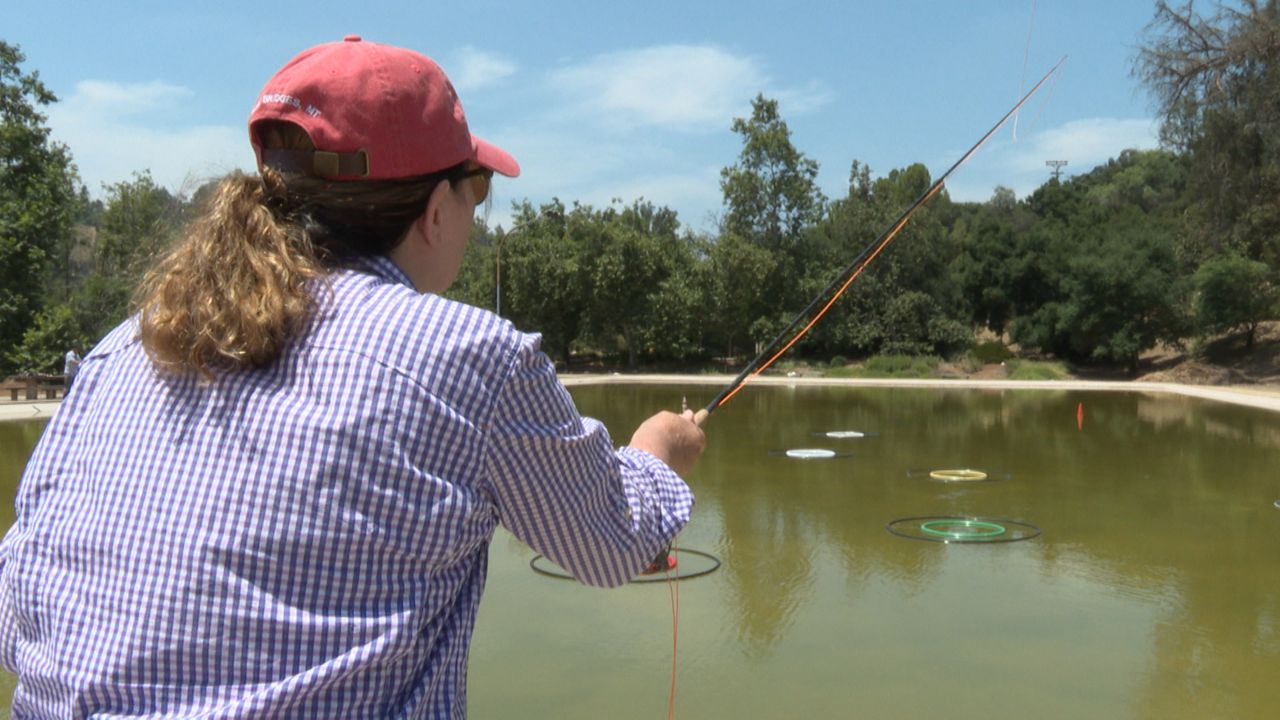 PASADENA, Calif. - Pasadena may not sound like your typical fishing hot-spot, but fly casters have been coming to this casting pool in Lower Arroyo Seco Park, that's open to the public every Sunday, for over 70 years.

“I got into fly casting through my parents,” said Craven-Swanson. “My mom and my dad were both fly casters and they encouraged me to get involved in the Pasadena Casting Club to learn more about fly casting and to become a better fly caster and fly fisherman.”

Having started at the age of 4, Craven-Swanson is a third-generation fly caster. She took to it more than her brothers and her parents would tie a rope around her waist in case she fell in the water. Having grown up in Arcadia, she says fishing in L.A. has changed since her father’s day.

There are a few fishing spots left in the San Gabriel River five miles up. Just make sure you have a fishing permit. But for those more interested in crafts, fly fishing involves more than an outdoor sport.

Naomi Okamoto got into fly fishing 30 years ago but she got tired of spending money on flies so instead, she learned to tie flies herself.

“Today we are having our monthly fly tiers round-up and we have all these tiers here today, tying open form, meaning they can tie whatever they like,” said Naomi Okamoto.

When it comes to the sport, some fly fishers are only interested in tournament casting, while others just want to tie flies.

It’s an art and a craft.

“The fly is done and this is what it looks like,” said Okamoto holding up a fly you could barely see.

For Okamoto, tying flies got so addicting, she didn’t really save any money, but she always had the right fly for a specific challenge and usually brings her kit along when fly fishing.

“What we are doing when we’re tying flies is we are imitating an insect in different stages of its development,” explained Okamoto as she looked through a tackle box full of brightly colored thread.

When asked which she enjoys more, fly-fishing or tying flies, she hesitates.

“You know, that’s a very difficult question. I enjoy both equally. I do,” said Okamoto.

Everybody here practices catch and release, so it’s more about the activity than serving dinner.