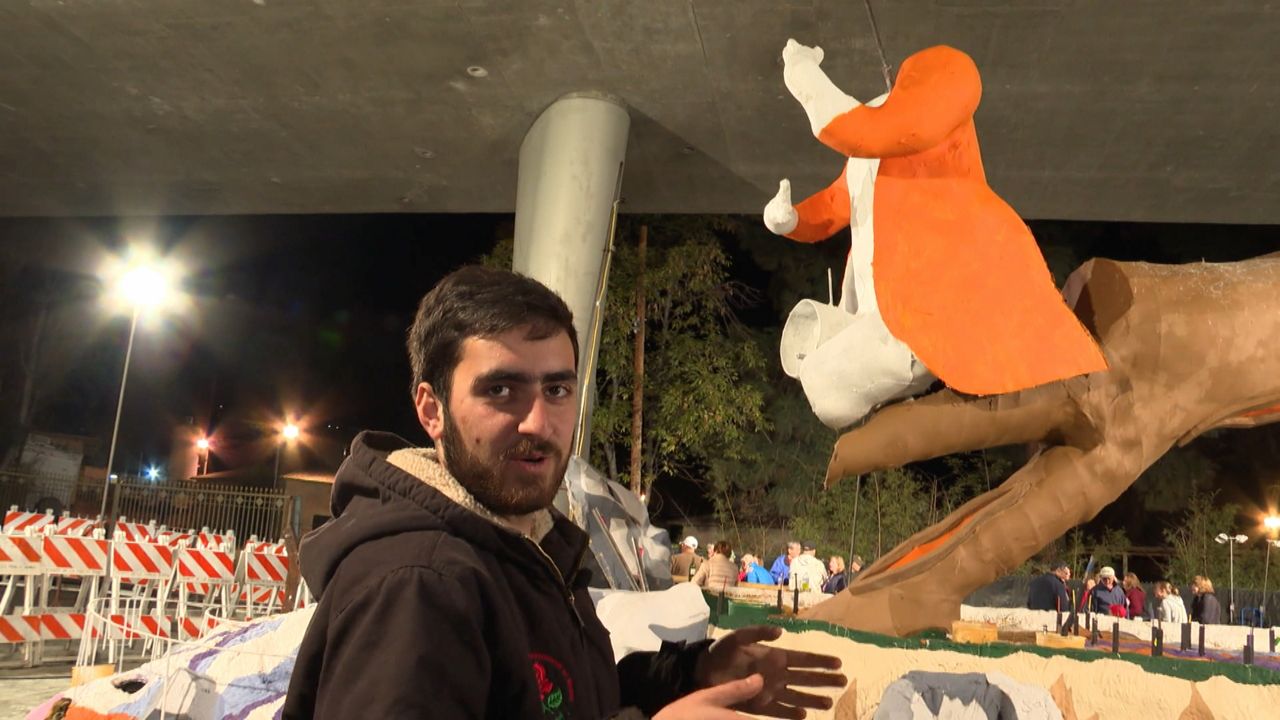 As the 130th Tournament of Roses Parade nears, volunteers are working hard to finish their floats. One design in particular combines natural materials with the latest animation technology.

It's called "Tree Frog Night" and it's designed, built, and decorated by hundreds of volunteers with the La Cañada Flintridge Tournament of Roses Association, which has been around since 1978. They are also the only group that builds and decorates their Rose Parade float entirely outdoors. They use the Flintridge Preparatory School parking lot beneath the 210 Freeway.

While the outside of the float is what attracts attention, there's a young man on the team whose passion is the float's moving parts.

Aram Dergevorkian is in charge of the animation, since there are no live performers on the float.

"The banjo frog is going to move back and forth, and his head is going to turn," he said pointing to the unfinished frog on the float.

"This is our new animation system that we just finished building," he explained.

It's a customized system now making its debut. Dergevorkian, 20, is a junior studying electrical engineering at Cal Poly Pomona, but he’s been involved with the La Cañada Flintridge Tournament of Roses Association since he was 12. This will be the group’s 41st float. It features three frogs playing instruments and is set in the Louisiana bayou.

"I will probably being lying down for comfort," said Dergevorkian, who will be one of three people inside the float during the parade.

In these tight quarters, he ensures the animations are functioning properly at the right time.

"For the parade, we have a total of seven mechanisms," he said.

Each mechanism is driven by hydraulics and Dergevorkian is also tasked with programming them.

"Setting up the actual motions and all of that. That’s the stuff I have to do at night, since no one else can really be working on the float while I’m moving stuff around," he said.

It’s basically a three-minute show that loops. On his laptop screen were audio waveforms and different colored lines. Each line represents a different animation.

"I have all the controls mapped to all the buttons," he said as he moved the nearby joystick.

"I just sit there listening to the music moving the mechanism however I want."

The float also has a backup camera and a Black Box, similar to what’s on an airplane to help troubleshoot problems. It's installed beneath the float.

"Anytime we turn on the float, it starts logging data, and then we can pull it up on our phone in real time," Dergevorkian said.

He says it takes a handful of nights to get all the animations set, tested, and ready to go, but he loves it.

"Electronics and hydraulics and all that stuff is just much more interesting than flowers to me," he said with a smile.

So, while the others decorate, he prefers to innovate.

The "La Cañada Flintridge Tournament of Roses Association" has been around since 1978 and relies solely on donations and memberships for support. Its floats have won the "Bob Hope Humor Award" for three straight years.