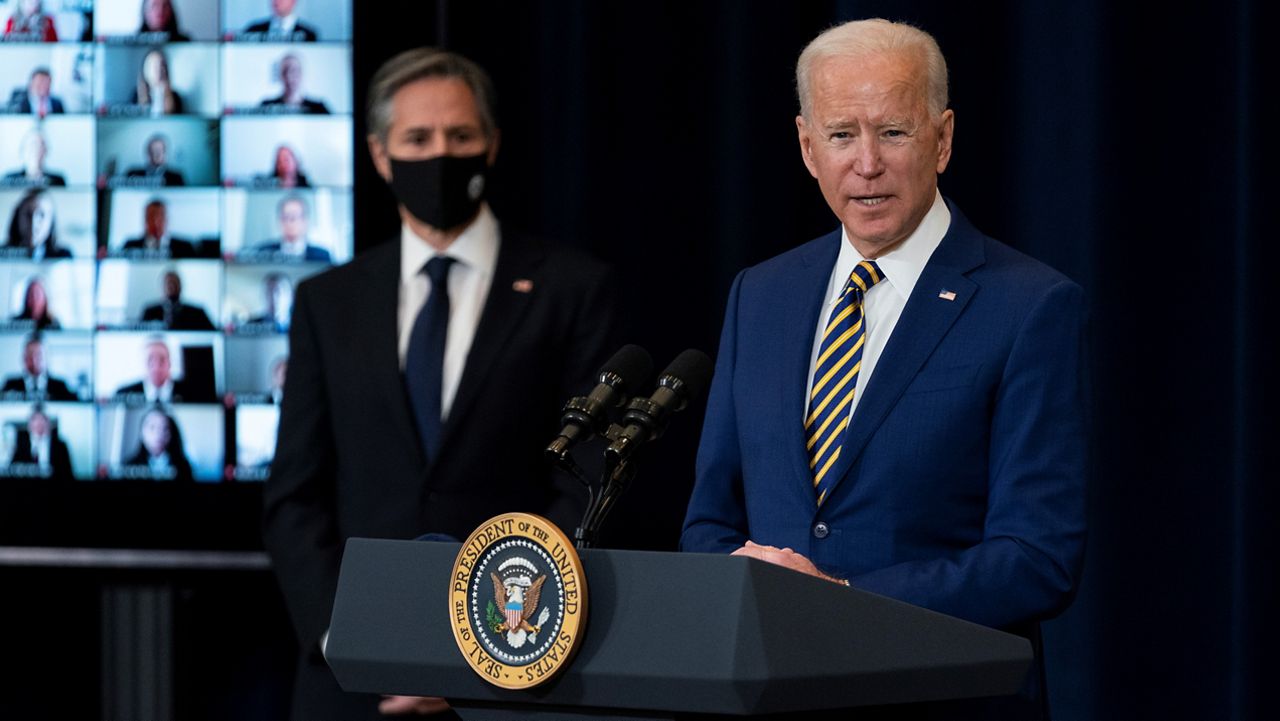 When President Joe Biden took office earlier this year, in an attempt to distance himself from the controversial "America First" foreign policy of his predecessor, he would often say in speeches that “America is back.”

The new president had hoped to use that message as shorthand to demonstrate his administration’s commitment to repairing U.S. alliances that had suffered under former President Donald Trump; to restore America’s standing as a leader on the world stage; and to rejoin critical geopolitical agreements on nuclear weapons and thwarting climate change.

“America is back, diplomacy is back,” Biden said during a February speech at the State Department. His administration, Biden vowed, would work toward “reclaiming our credibility and moral authority.”

“I want the people who work in this building and in our embassies and consulates around the world to know that I value your expertise, and I respect you. I will have your back,” Biden told the State employees.

But nearly nine months after he delivered those remarks, President Biden's message has been somewhat hampered – in part because of the lack of how many of his ambassador picks have been stalled in the Senate.

Just five have been confirmed since he took office, according to the nonprofit Partnership for Public Service – a staggering number which pales in comparison to his predecessors. Another 60 remain in limbo.

For comparison, by late October in the first year of his administration, Trump had 22 ambassadors confirmed, 17 by voice vote, according to a tally from the Washington Post.

“You would’ve thought that it would be a little bit easier for Biden,” Paul Light, a professor of public service at New York University, told Spectrum News in an interview. “He's just trying to fill slots. And it's become very difficult.”

“One could argue that we've got plenty of talented Foreign Service officers who could operate in an acting capacity – that’s [still] not a good situation.” Light continued.

“You know, we're sending a signal to the countries that don't get an ambassador that we just don't care very much. It's not good foreign policy.”

These diplomatic vacancies were especially notable last week, as President Biden met with world leaders at the G-20 Summit, and later, traveled to Glasgow for U.N. climate talks.

“Not having leadership at our embassies is debilitating,” said Brett Bruen, the former White House director of global engagement under President Obama.

“We can't get diplomacy done” without ambassadors, Bruen told Spectrum News in an interview Wednesday. “You don't get the meetings, you don't get the press attention. You just don't have the influence to be able to move the needle in a lot of these foreign capitals, without having an ambassador.”

The lack of formal ambassadors, he said, “really is a drag on our diplomacy [and in] accomplishing many of our strategic goals.” "There’s only so far you can get without the title of ambassador,” he added.

Asked whether he believes countries might be less inclined to work with an acting official than someone nominated by the current administration, Bruen said it boils down to a matter of influence.

“In diplomatic terms, if you don't have an ambassador, then basically, you have somebody who's stepping up to the plate, but they don't have the same influence as an ambassador,” he told Spectrum News. “They’re obviously not able to go into some of the key corridors of power in a way an ambassador could stride through and have an audience with key leaders; to deliver tough messages; to be able to get information.”

Experts also say these vacancies could seriously hamper Biden as he attempts to deliver on key policy goals. They could also siphon his adminisrration off from critical sources of information as it works to flesh out plans for dealing with adversaries such as Russia and China.

“And that's a key factor here that often is overlooked: That some of our best information doesn't come from spies," Bruen said. "It doesn't come from our political attaches. It comes from the ambassador, who gets invited to the small dinner party; or the private cigars, or the drinks with the head of a political party, the minister, or even the president themselves – where they share details about their plans, their concerns, too, all of that insight.”

The slowdown in confirmation is due in large part to efforts by Republican Sens. Ted Cruz of Texas and Josh Hawley of Missouri.

Cruz, for his part, has vowed to block Biden’s State Department nominees as retaliation for the administration’s decision not to impose congressionally mandate sanctions on the Russian-German Nord Stream 2 pipeline. Hawley has made a similar vow based on the Biden administration's handling of the withdrawal from Afghanistan, demanding resignations from Secretary of State Antony Blinken, Secretary of Defense Lloyd Austin and National Security Adviser Jake Sullivan.

The stonewalling has lasted months. And it has prompted exasperation and concerns from both U.S. allies and former diplomats, who say his attempts to block State Department appointees could carry real national security and foreign policy risks.

Asked what message these vacancies send to world leaders – especially as Biden returns from a days-long trip abroad, Light said, “It’s not a good look.”

“It's a terrible situation. It's an embarrassment,” the New York University professor told Spectrum News.

Confirmation delays have affected every administration from time to time, Light said, but the thing that’s different about this one is “the coordination between Cruz and others, who just want to decapitate the administration.”

“It’s naive, it's abusive, it's humiliating to the country, and it doesn't work,” Light said of Cruz’s efforts. “They’re not really going to stop anything. It's like showing up at a formal party in your underwear. And it just makes us look like fools.”

Currently, President Biden has less than 10% of his nominees in place — lagging far behind his recent predecessors, who at this point in their presidencies had between 50% and 75% of their nominees at their posts, according to CNN.

Another senior E.U. official described Cruz’s actions as a “serious concern” for Brussels: “I don’t think it’s for us to get into the particular details that are holding things up. That’s for the States to address,” the official told Politico.

The Texas senator insists he’s holding the line because he disagrees with Biden’s foreign policy. But Democrats say Cruz and other objectors are just trying to boost their standing with conservative voters at the nominees’ expense.

“The holds that are used to strangle policy are long and familiar,” Light said. “It's a perfect way to illustrate or to signal your disquiet for whatever issue you care about. It's not just this particular case, [and] it’s not just foreign policy for Cruz.”

These holdups “happen from time to time,” Light added. “And usually it gets it gets worked out by the majority leader and by the presidents over this sort of an effort to get some comity, and kind of figure a way through it."

"But there's nobody who can break somebody like Cruz – he’s making a statement with it. And he's not going to yield. So you're going to have to basically go with acting appointees, or deputies or whatever, it's very difficult to alter his, his destination, whatever that destination is,” he said.