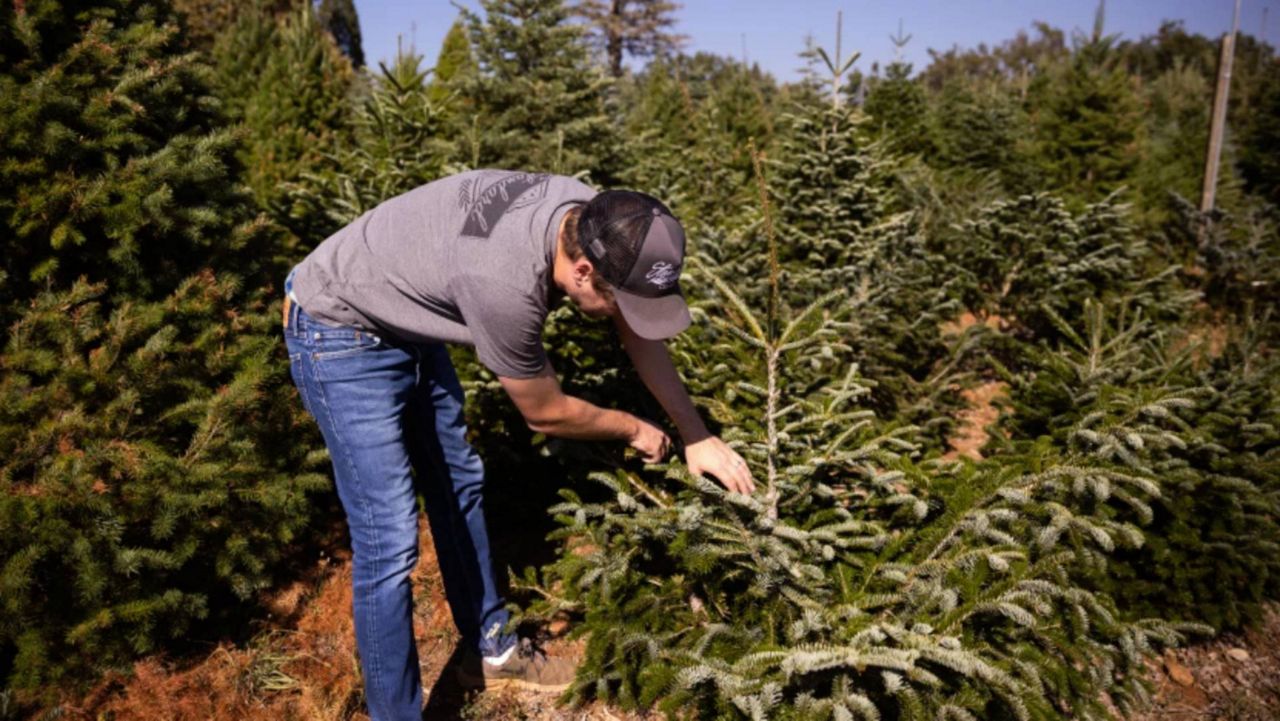 Cutting down a fresh Christmas tree is a family tradition for many during the holiday season.

In an interview for "LA Times Today," metro reporter Robin Estrin joined host Lisa McRee to explain why the drought and wildfires are causing a difficult year for Christmas tree farmers like the McGee's, who have been in business since 1952.

"Mike McGee planted his first round of conifers in 1978. He has since passed the farm down to his son, Eli Mickey, who is 34 years old and had previously been working at a biotech company in San Luis Obispo," said Estrin.

When the pandemic hit last year, many small businesses shut down, but the McGee's business thrived.

"When Christmas came around last year, they had one of their busiest tree seasons in recent memory. You can imagine many families were looking for outdoor activities or something to get outside and do with little ones, which fits the bill perfectly. They had cars wrapping around their lot and had an incredible turnout," Estrin added.

Unfortunately, El Dorado County went through a dry winter, and Estrin said the crops were impacted.

"Mike McGee planted 2,000 seedlings this February. And by the end of the summer, 80% or 16,000 trees didn't survive. And the McGee family attributes to increased temperatures and decreased rainfall. It was severe, and it was a big loss for them."

Along with the Christmas trees, Estrin says conifers were affected by the drought.

"Wild conifers have increased in the American West for hundreds of thousands of years. And ecologists are looking at the species with concern. A UC Davis researcher found in a study last year that conifer trees, especially those growing at low elevations as they do in El Dorado County, are struggling to survive after wildfires, especially when followed by a drought. So, the reason for this is twofold; conifers carry seeds in their cones, and it's not easy for those seeds to travel to the interiors of increasingly large, burned patches. Second, the seeds that do make it are having trouble establishing themselves without the shade provided by the overhead canopy and increasingly dry conditions."

Due to extreme weather events, Estrin said there will likely be a shortage of Christmas trees this season, and they will come at high prices. Along with that, the McGee's are dealing with a health crisis.

"So, while the McGee's had an unfortunate year dealing with the increased environmental crises that are compounding on their farms, they were also dealing with a family crisis. Mike McGee, who is 69 years old, was diagnosed with ALS, or Lou Gehrig's disease, in 2015. And it's become increasingly hard for him to work the farm as he has for decades, which is part of the reason why Eli stepped in to help out his family this summer."


Along with dealing with a health crisis, the Caldor fire hit the McGee's second farm in Grizzly Flats, a Gold Rush-era Mountain town, southeast of their Placerville ranch.

"And that farm was struck by the blaze, and after several weeks of waiting and not being able to see the farms, due to winding mountain roads that were blocked by the National Guard and the McGee's learned that at least 40% of the trees on that lot had completely burned. That was thousands of trees and the damage that set the family estimates at around $75,000," Estrin added.

Since Eli returned to the family farm, he and his father have spent hours on their porch, thinking about the future of their business.

"I think for a lot of farmers in California, the future is uncertain. So, there is an incredible amount of resiliency in the McGee family; this is a family that is no stranger to hardship. And at the same time, the future of water in California is uncertain. What is certain about it is that we are seeing increasingly dry winters and hot summers, which will impact the McGee's operations and U.S. Operations. It's something that they're aware of, they're thinking about, and it's a complicated conversation that they're having with themselves," Estrin said.

Hello everyone, and Merry Christmas (Nov. 1). My last story as an intern for the @latimes is about drought, fire & Christmas trees. But more than that, it's a story about a family. Meet the McGees, El Dorado County's first Christmas tree farmers:https://t.co/U9P5xEZYPs