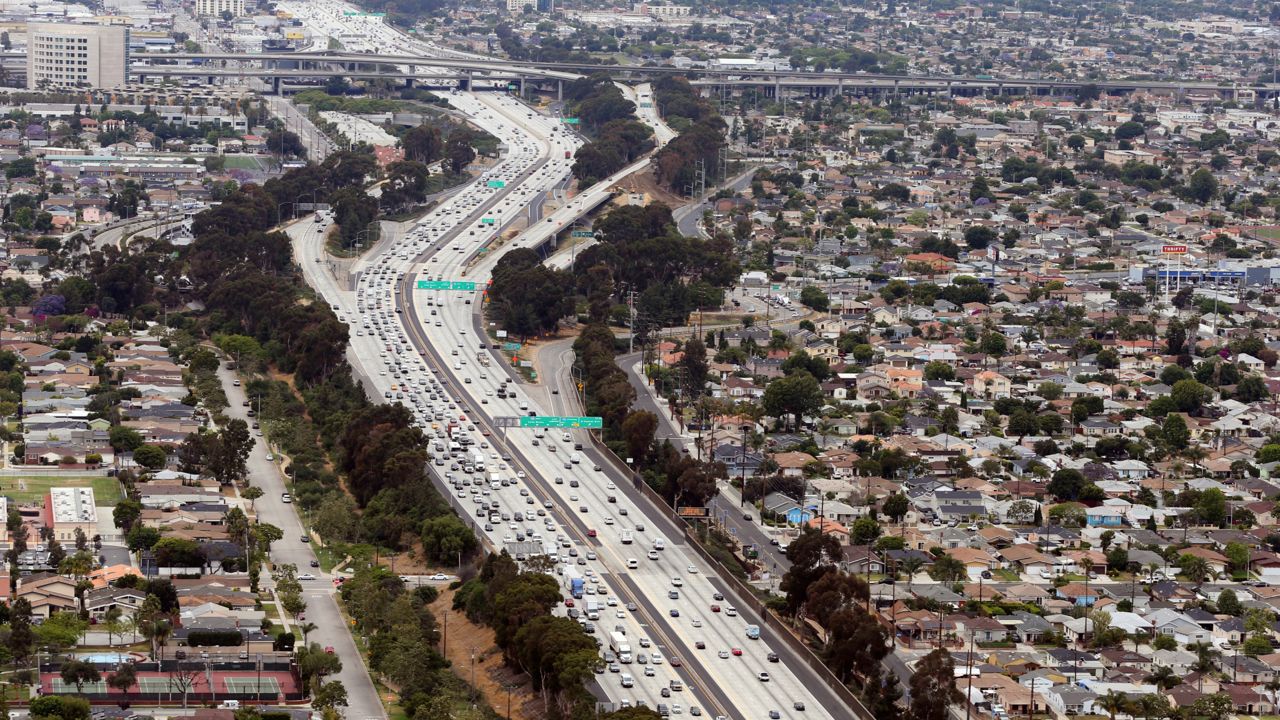 'Saturday Night Live' likes to mine the comedic qualities of SoCal's freeways.

And while the roadways usually make us cry and groan more than laugh, they also tell a story about the history of the region.

"Freewaytopia" is the name of Haddad's book, which he wrote because he says there is a duality in LA's freeways.

"They are both utopian and dystopian. And so I thought 'Freewaytopia' covered both the good and the bad because you can't tell the story of Los Angeles without telling the story of its freeways," Haddad said. "We all know Sig-Alert, which originated from a man named Loyd Sigmon, who was from Sherman Oaks in the 50s, and he created a system by which, if there's traffic, you could alert radio stations, and they could put out a Sig-Alert for a delay on a freeway. We know about the Hollywood split or the four-level; these are interchanges that originated in Southern California. Many of them were named by traffic jockeys. And of course, you had Bill Keene, a very famous traffic reporter who came up with some better fun nicknames. For example, the East Los Angeles interchange he called Malfunction Junction. And you had the Orange Crush. These things we take for granted now, and we could thank these traffic reporters for coming up with some new terminology."

Each of LA's 12 freeways gets its own chapter in Haddad's book.

"The Hollywood Freeway was the first actual modern freeway," Haddad said. "And then it's no coincidence that most freeways were built from the '50s to the '80s or really through the '70s because the LA population doubled during that time from 1.5 million to three million. And so what I did in the book was I focused on chronologically the opening of all these different freeways from the Arroyo Seco being chapter one. Up until this century, freeway chapter 12. And these are the more iconic freeways I focused on, like the San Diego Freeway, the Ventura Freeway and even the Little Marina Freeway down in Marina del Rey. And by reading these chapters on freeways, you're reading about Los Angeles history and how these freeways came to be."

While the San Diego and Ventura Freeways were named after the cities those highways lead to; the Century Freeway was named after a boulevard.

"And so it was decided it should be called the Century Freeway just because it mirrors Century Boulevard," Haddad added. "And there are some freeways not named after destinations like the Golden State Freeway. I mean, Golden State, the nickname for California. That's more of a frame of mind, or it's what we imagine California to be. And even the Arroyo Seco Parkway was not really named after their destination, although for several decades, that freeway was known as the Pasadena Freeway."

The opening of freeways in the Southland was also a big moment for women engineers.

"Marilyn Jorgenson Reece was the first fully licensed engineer who was a woman in the state of California, and she designed the San Diego-Santa Monica Interchange," Haddad said "It was the first interchange where cars could drive through at freeway speeds. When you think of old interchanges, you have to really slow down in both through a cloverleaf. And, her design for that interchange became a model for all interchanges after."

Even though the construction of freeways made commutes more convenient for drivers, some low-income communities paid the price for those freeways.

"We can look right in downtown Los Angeles and just east of downtown," Haddad said. "In downtown, you had Bunker Hill, where the Harbor Freeway went through displacing thousands of people. To this day, Boyle Heights and East Los Angeles have about 15 to 18% of their land covered by freeways. And in the county of Los Angeles, it's only 1%. So the optics sometimes look at where the lower-income people are, is where freeways were often built."

Haddad also wrote about the freeways that did not go through, and he says that was one of his favorite parts to write.