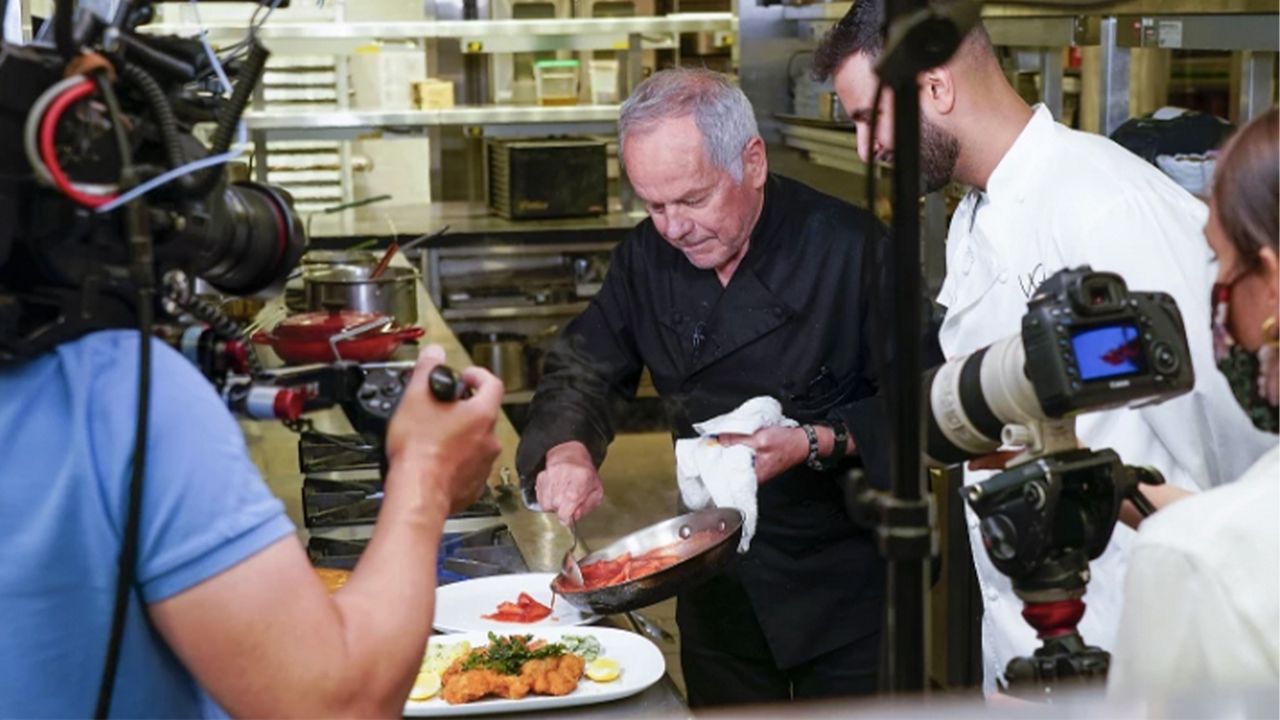 He is one of the most well-known names in the culinary world: Wolfgang Puck.

And now the celebrity chef and restaurateur is sharing how it all started in a new documentary about his life, which includes appearances by his friend and fellow chef the late Mark Peel, who, along with Puck, helped define California cuisine.

Puck told McRee he had a rough childhood, and talking about it in the documentary was not easy for him.

"Well, I always tried to bury my life as a kid. You know, they are only good stories; they are only good memories about food. But the rest, my stepfather was terrible, and he was abusive both to me and my sister, Christina, not only mentally but physically. And I think I could not wait to get out of my home. I wanted to get away from the house. For me, it was the best thing. And my stepfather always told me I am good for nothing and that I was never going to achieve anything. And then I went to cook, and he said cooking is for women and that this is not a profession for men; I should be a mechanic. And he said I was going to cook because I was good for nothing," Puck recalled.

When he was 14 years old, Puck left his home to pursue his cooking career. He ended up working at a hotel restaurant, but he still faced challenging moments. He recalls a dark moment he experienced after being fired from his first job.

"It was a horrible day for me and probably the worst one in my life. I was working at a hotel for maybe five months as a potato and onion peeler. And then, on this Sunday, we ran out of potatoes, and the chef there was as crazy as my stepfather; he was abusing people, hitting people and screaming at them," Puck said. "In the end, he tells me that I was fired and that I should go back home to my mother. And I looked petrified; I didn't know what to do. I said I could not go home, I told my stepfather I would never come back home, and he fired me.

"So that day, I said I was going to kill myself. I was going to jump into the river and make an end to all these crazy things. I'm good for nothing. I started to believe it, and it started to get into my head. And I stood probably for 45 minutes under it on the bridge, looking down and thinking what would happen. And thank God, all of a sudden, a light bulb went up, and I went back to the restaurant the next morning. I was peeling potatoes, carrots and onions until the chef saw me. He grabbed me from my back and told me to get out. He went on and on screaming, telling me to go home, and he called the owner. The owner was a little more empathetic, and he sent me to the hotel, and they had a lady who was the chef there. The chef had kids, and she was a little nicer and told me to be quiet, do my job and not make any noise, and everything would be fine. And that's the beginning."

The documentary also focuses on Puck's relationship with the late Mark Peel, who passed away from cancer recently.

"You know, it was heartbreaking because I went to see him like 10 days ago on Saturday. I was in the hospital, and he was half coherent. I asked him when we were going to cook together again. And, 12 hours later, he was gone. I mean, it was a shock, and he was only 66 years old. He had a lot of his life still ahead of him, and he had a 12-year-old kid. So, I think it is really crazy when you think how life can change in two weeks," Puck said.

Given the challenges and successes Puck has faced throughout his life, he said his greatest achievement is being present and finding balance with his family.

"Something I have learned is how to have balance. And my wife Gelila often tells me to take time off. What am I going to do, cook every day? And then I will be gone, and everybody will forget me in that week. So I say you have to spend time with your family, with your friends. And now that's what I try to do. I still work all the time, but I also spend time with my family. We go to Europe in the summer, and we go skiing together, and I try to spend as much time as possible outside of the restaurant," Puck said.