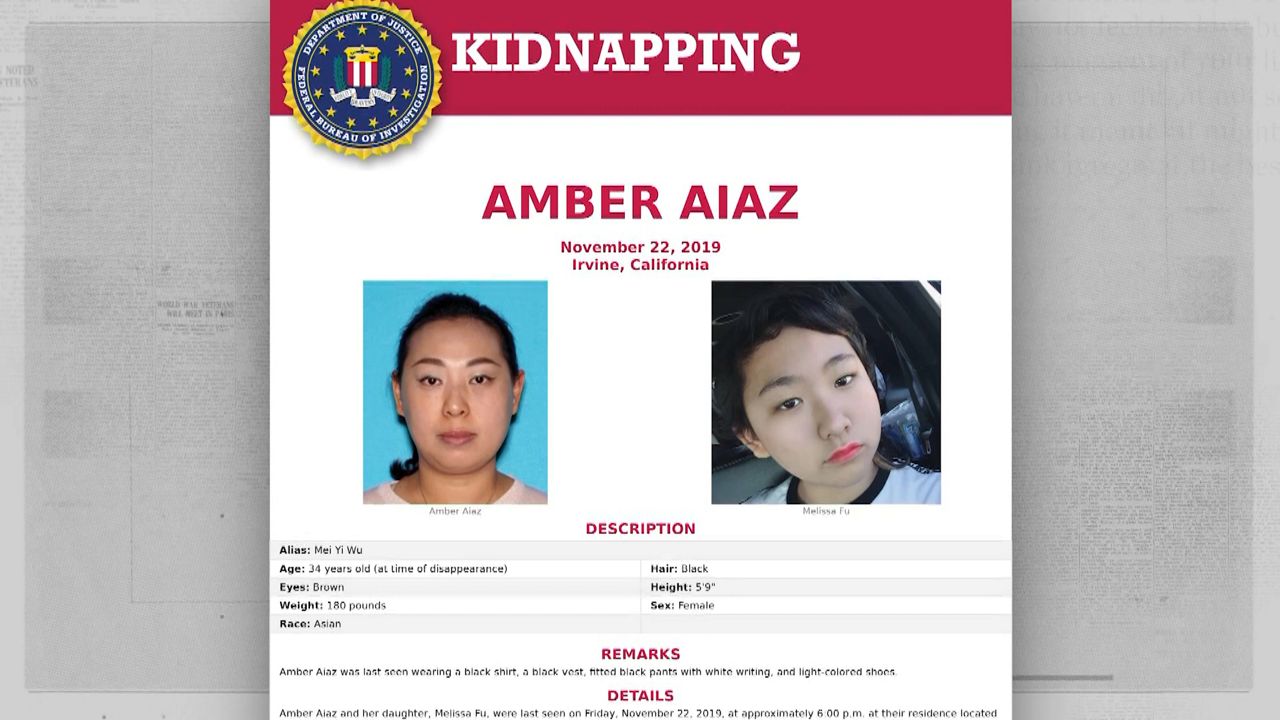 When a wife goes missing, suspect number one is usually the husband. When a mother and daughter mysteriously vanished in Irvine, all eyes were on her spouse, but the more detectives looked, the more his far-fetched story checked out.


Before the abduction, 42-year-old Cheng Zhang was living in Irvine with his wife Amber Aiaz and stepdaughter Melissa Fu.

"They had not been in Irvine for that long. Only a few months. They had been in Vegas before that. And what happens is, on December 2, 2019, he approaches the police and says that his wife and stepdaughter have been abducted. It happened more than a week earlier, and this is the beginning of the police involvement in this investigation," said Goffard.

The day Zhang's wife and stepdaughter were abducted started as an average day, until a man and woman show up at his door.

"That day, Zhang says, he is at the apartment with his stepdaughter. He says his wife Amber is coming home from Las Vegas, where she picks up food products to sell in Irvine. That is one of the ways they make their living. At about 4:30 p.m. on November 22, 2019, a man and woman he did not recognize knocked on the door. The woman has an object in her hand. He feels a spray on his face and is rendered unconscious. When he wakes up, he notices blood on the carpet, and there is a bloody handprint on the wall, his stepdaughter is gone, and his wife, who should be home by that point, is also gone. What he finds is a note supposedly written by whoever abducted them. It says, "Do not inform the police, clean up the apartment, do as we say, and they will be returned safely to you." For the next week, he received five more notes, reiterating that theme. After a week of this, he says he decides that the abductors are not going to return his wife and stepdaughter, and he contacts the police department," Goffard added.

When police interrogated Zhang, they noticed his story's details were very consistent, but Goffard said he was also displaying behavior that was not consistent with someone guilty.

"One of the detectives, Gavin Hudson, at the Irvine Police Department, said that the turning point for him was on January 15, 2020. Zhang has been giving the same account for about six weeks consistently. On that day, they interview him all day long. The FBI is there, and they have an FBI behavioral specialist watching. They surprised him with a polygraph test, which he agrees to take. And his story hangs together in a way that would challenge the memory of even a trained actor. Much less that of a simple man of the kind that Cheng Zhang seems to be. So this contributed to their belief that there might be something else going on here than a husband killing his wife and stepdaughter."

After interrogating Zheng, police came up with various theories.

"One theory is the gone-girl theory, which is that Amber took her daughter Melissa and just disappeared. Maybe they were running from something. The trouble is, it is hard to stay off the grid for that long. It has been a year and a half, and they have not shown up in any database. The police tell me their passports were at the apartment. The Chinese government says to the U.S. authorities there is no record of Amber accessing her bank account in China, nor is there any evidence of her returning to the country. And it is possible, I suppose, they are in some other country, maybe they are in Mexico, but what would they be living off? What money would they be using to live on? So all of these arguments argue against the so-called gone-girl Scenario and point to the seeming likelihood that they are victims of a double-kidnapping that turned into a double homicide," Goffard said.

Another theory police mentioned has to do with the wife's behavior. According to police reports, she had convinced Zhang that she had millions of dollars in investments and hundreds of thousands in cash.

"In the mother's past, there were some men that she had involvement with who believe that she had swindled them. She also, according to police, exaggerated habitually about the money she had. She did not have much money. She was practically broke. But she convinced people that she had a lot of money, including her husband. Cheng Zhang had the belief that his wife had millions of dollars and was surprised when police confronted him with evidence that she did not. So, she seemed to be deceiving even her husband. One theory is that people kidnapped her believing that she had a lot of money she might have led them to, and when there wasn't any money, they were killed. That's one theory," Goffard added.

Even though there was blood at the apartment, their bodies were never found. Goffard said Zheng is now living in Los Angeles and is working as an Uber driver.

"I would like to talk to him, but I think he is apparently afraid that organized crime is behind this and has been nervous from the beginning about talking to the police. When Zheng went to the police, he was so scared that they would see him that he spent the night on the couch at the Irvine Police Department rather than get a motel or go home. So he seems to be living in fear that organized crime is coming after him. That seems to be the case with him,” said Goffard.