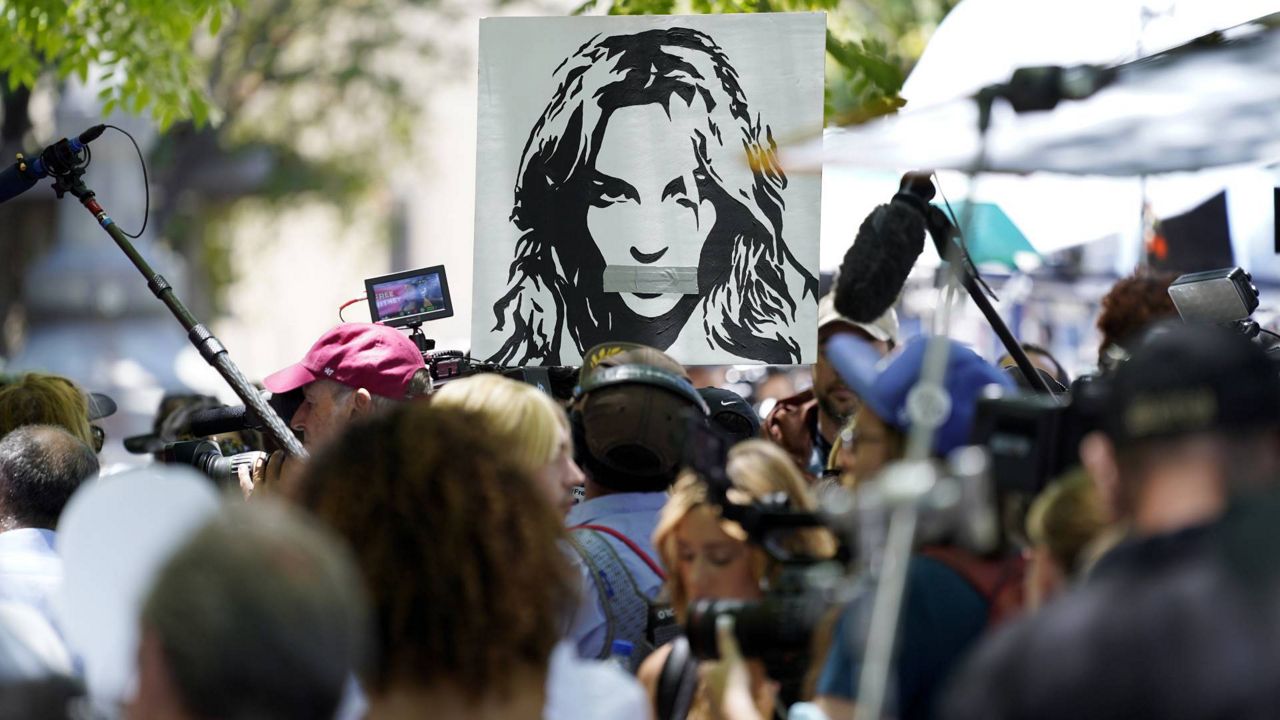 A portrait of Britney Spears looms over supporters and media members outside a court hearing at the Stanley Mosk Courthouse, Wednesday, June 23, 2021, in Los Angeles. (AP Photo/Chris Pizzello)

Britney Spears has finally confirmed what many fans have long suspected: She wants out of her 13-year conservatorship.

In a prepared statement read over the phone, Spears gave the court details of alleged abuse, forced birth control and the inability to make her own decisions. Entertainment writer Meredith Blake joined host Lisa McRee on "LA Times Today" with the story.


Spears' conservatorship began after she went through mental health issues and a public downward spiral.

"It was documented by the tabloids veraciously," said Blake. "And Britney is committed to a hospital involuntarily, and eventually, it ends with this legal arrangement in which her father is made her conservator. That means he controls her life."

Even though Spears makes millions of dollars a year, her father is paid some of that money, and she still has no control over her finances.

"Part of the ironies and things that people do not understand about this arrangement is that despite her public troubles, she is rebounding quite dramatically," Blake added. "Britney had a very lucrative residency in Las Vegas for several years and made millions and millions of dollars from that. She recorded more albums, went on more world tours and continued to be a money-making machine."

In a recently leaked audiotape at a conservatorship hearing, Spears addressed the court, saying she was bullied into going on tours. Last February, Blake wrote a review about the documentary "Framing Britney Spears," which raised awareness of many of Spears' hardships.

"This documentary marked a turning point in public opinion," Blake said. "There was a 'Free Britney' movement percolating for a few years since she abruptly canceled her Las Vegas residency. People started to wonder what was going on. They wondered if she was being held against her will, basically. And at first, I think people thought they were a little crazy, and then The New York Times produced this documentary with F.X. and Hulu that delved into it, and I think many people were shocked with what they saw. One thing I think it did well was look back at the tabloid culture of the mid-2000s and the way Britney and her health issues were treated as a punchline."


Spears, who is now 39 years old, admitted that she was not allowed to get her IUD removed and did not have control over her own body.

"I think that was a very shocking moment for people who were listening and reading the coverage. She literally has to have this birth control device in her body against her will because maybe she will not make enough money to have another baby," Blake said.

Celebrities have also spoken out about Spears' conservatorship and apologized for their own role in it. Moving forward, Blake says, Spears wants to end her conservatorship.

"This is an uncertain path forward for her. Typically, the person in the conservatorship dies because they are usually placed on older people who have dementia or some other medical limiting capacity. But that is not the case with Britney, so it is an unclear path forward. But we know she wants to end it without having to get further evaluations. So it remains to be seen whether that will happen."

Spears discussed the issues she has with how her conservatorship was handling her therapy appointments and how her team wouldn’t let her have her IUD removed.