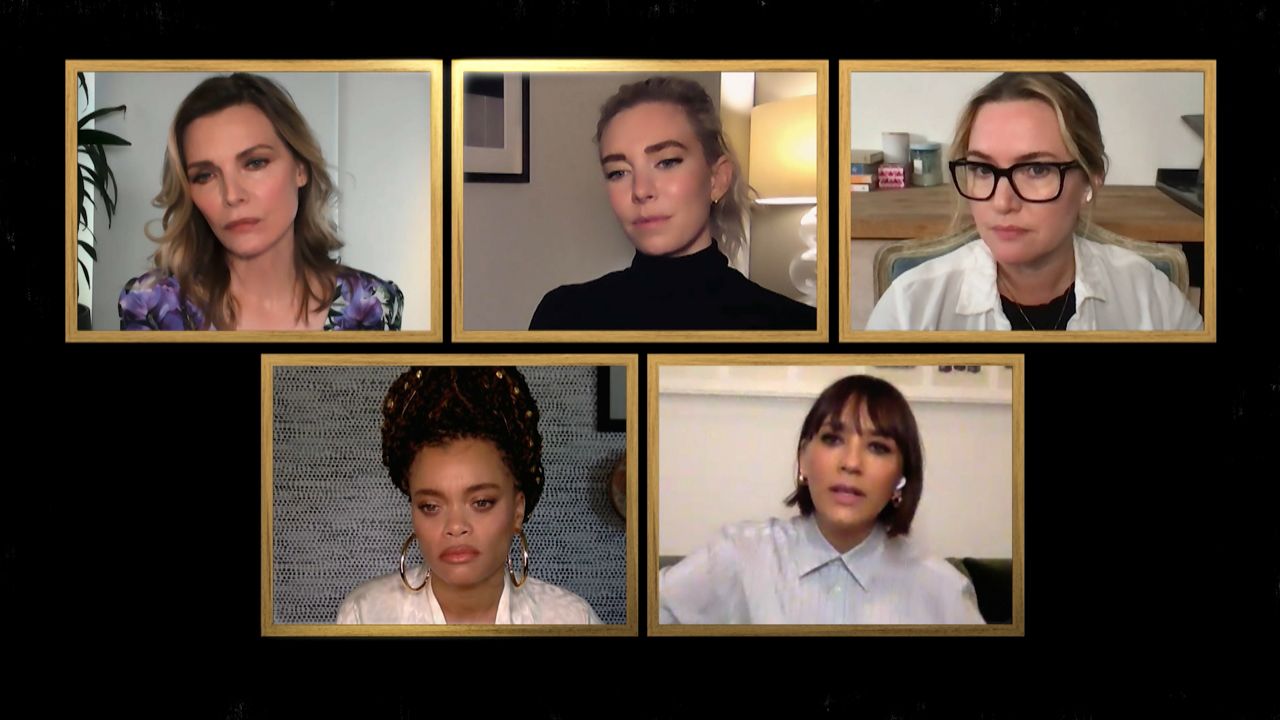 Some of Hollywood's best female actors talk about the lessons they have learned throughout their careers.

Hollywood's award season will look a little different this year due to the pandemic, but Oscar buzz has already started.


In this envelope roundtable, Times TV critic Lorraine Ali talked to some of the best actresses in Hollywood about lessons they've learned throughout their careers and in recent roles.

Kate Winslet recalled some of the stereotypes female British actors face in Hollywood.

"When you are British, so often, the assumption is that we're all classically trained and that we have a bunch of ribbons and rosettes and certificates next to our names. I left school at 16, and I got lucky. So that is why I say that I learned on the job completely," said Winslet.

One of the films discussed was Pieces of a Woman, and actor Vanessa Kirby said she wants women to be able to identify with her character.

"I so clearly remember reading the script Pieces of a Woman, and there was like a 25-page birth scene. I had no idea what that was like, but I was so blessed I got to watch someone do it for real. It is the most generous act anyone could have ever done. It definitely feels like a different time right now. We actually want to represent women that we all identify as being and the weird parts of us. In the movie, my biggest intention was not to make it a sanitized movie version of a birth. I wanted to include the things that we might think are unpalatable and uncomfortable. However, those are factors of being a human and particularly a woman. When I was just starting, I read so many scripts where it was a kind of like a film version of a woman as opposed to someone like my sister or me," added Kirby.

Winslet, who plays an LGBTQ character in the film Ammonite, said the film made her realize she had been victim to heterosexual stereotypes in previous roles.

"In a script, if there is a sex scene between a man and a woman, when the woman in the scene decides to have it her way, or if she wants to adjust something, what it says is that "she climbs on top dominating now," why can't she just know what she wants. I suddenly realized that these stereotypes and these demographics sort of exist like breathing. For me, it was one thing that opened my eyes to wanting to take responsibility for this shared voice that we have as women. We have to work a bit harder to not be objectified even in ways when we don't realize it's really happening," said Winslet.

Actor Rashida Jones recalled that there have been more conversations about the "norms" in women's acting roles in the last five years.

"Even little things like where you shoot a scene or like Vanessa, seeing the diapers you have to wear after you give birth, I've never seen that before," said Jones. "I was lucky enough to give birth and have a beautiful toddler. But to see moments like that — like to leak through your shirt — we've seen it a little bit, but it's always comedic to see that and accept those as the subtleties of being a woman. That changes the fabric of how we see ourselves and how we see each other. And it is this weird thing when you don't think you can speak up, but the truth is that we can now, and we must."