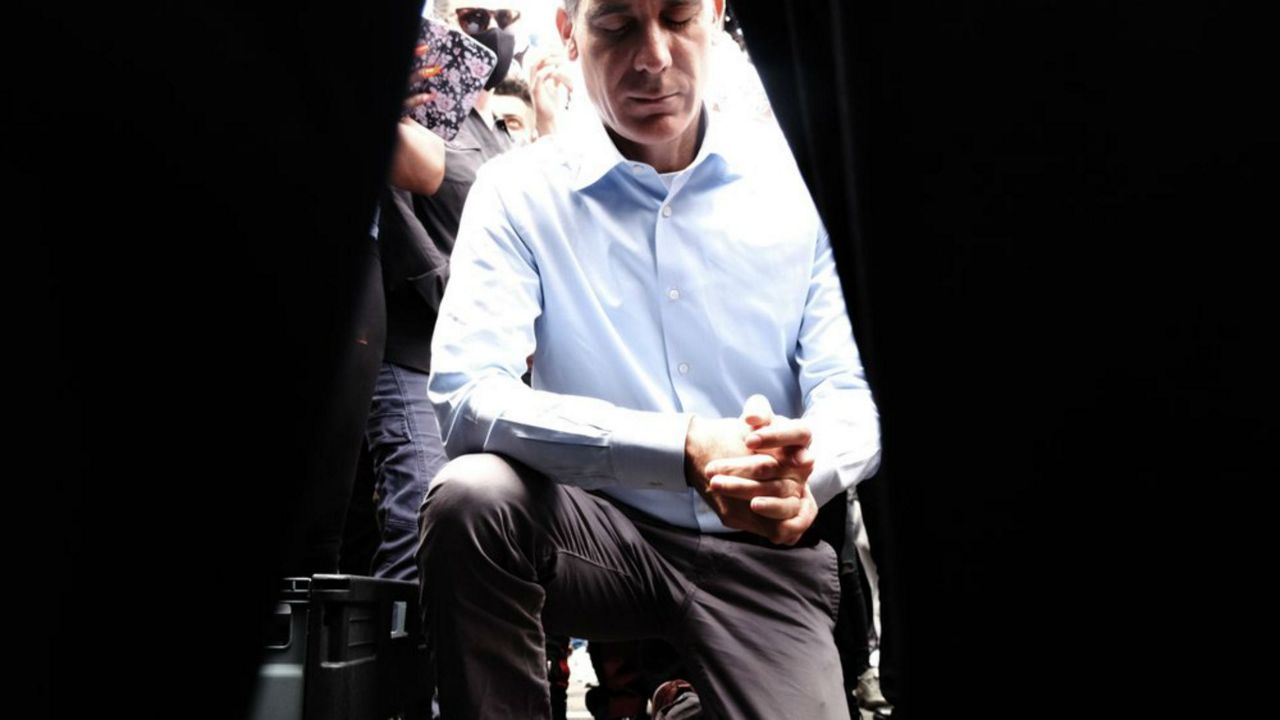 Black Lives Matter protests across America have started peacefully, but many have ended with looters and vandals smashing windows, spray painting graffiti, and stealing inventory from businesses. Downtown Los Angeles, Van Nuys, Hollywood, Santa Monica, Beverly Hills, Beverly Grove, and the Fairfax District have all suffered significant damage in the past several days. On Monday, members of the community came together to help clean Santa Monica.

This morning’s cleanup on

We live in an amazing place!

On Saturday, a Black Lives Matter protest started at Pan Pacific Park near The Grove in the Fairfax District. It was peaceful until the group reached The Original Farmers Market at the corner of 3rd Street and S. Fairfax Avenue.

“As folks began to disperse, there were some people who jumped onto a bus as then officers went to the intersection. That’s when the conflict started,” Mayor Garcetti said on Inside the Issues. “I think that’s how the seed of it was planted, and of course: People are raw right now; people are upset right now; people are hurt right now.”

Mayor Garcetti acknowledges that protesters have the right to march in honor of the unarmed black women and men who have been killed by police in this country. However, when crimes are committed by both civilians and police officers during these protests, he said “everybody needs to be accountable to standards.”

“First and foremost, law enforcement officers who wear a badge and have the responsibility to not only abide by our Constitution and our laws, but who have lethal force,” he said. “That goes without saying, and as [Los Angeles Police Department Chief Michel Moore] said, internal affairs is active. Any complaints that are made will be investigated. That’s one of the good things that we’ve learned from years past where those things used to get ignored, shoved under a carpet, or anything else.”

It started peacefully, but she could tell the situation was escalating when the group reached The Original Farmers Market near The Grove.

When peaceful protests turn into violent ones, Mayor Garcetti recognizes how difficult it can be for police officers on the ground to control the situation.

“It is tough when there are cars burning and people won't move and refuse to move. Tactics can be troubling to watch,” he said. “Sometimes there's violence that’s involved in multiple directions when people are throwing bricks at officers. One officer had his skull cracked and had to have surgery on that, looks like he will live, but vice versa. Obviously, when people see [an officer swinging] at folks who are unarmed, that can also be troubling.”

The mayor said “violence is never the answer to violence.” He asks civilians to aid law enforcement officers and firefighters when looting and arson happens.

“Please help us. Please help our firefighters get to fires because oftentimes we have folks who are blocking them from putting out fires that can kill people,” he said. “When we see criminal behavior, and lighting a police car on fire is criminal behavior, with weaponry and bullets that can explode and kill people, the general public as well as our law enforcement officers, this is not time to play. Use your better judgment. Learn how to step back. If a law enforcement officer is asking you to do that, please do. You don’t seed your right to protest when you seed a little bit of ground.”

The protestors in Hollywood were adamant that looting and violence was not what they stood for. They want a peaceful protest and stood in front of the building to protect it @SpecNews1SoCal pic.twitter.com/OMSJuMX4LN

“I think if we all can all de-escalate, that will help us make sure we can protect our constitutional right and our obligation as human beings to speak out and speak out loudly at this moment, without this becoming something in which we look for new fights with strangers we don’t know on our streets, whether they wear a badge or whether they’re a resident of Los Angeles,” he said. “We all call this place home and we need to look at each other as human beings across those lines.”

Melina Abdullah, professor of Pan-African Studies at Cal State LA and Black Lives Matter organizer, said protesting in affluent neighborhoods was “deliberate." In 2017, the median household income in South L.A. was $35,660, while it was $74,279 in the Fairfax District and $149,732 in Beverly Hills, according to the Los Angeles Almanac. There has been no reported looting or vandalism in South L.A.

“We have to own this no matter what our color is. We can't just shoulder this as African-American,” Mayor Garcetti said. “As Latino, and white, and Asian Pacific Islander Americans, and Native Americans, this must be all of our obligation to work against racism, and especially anti-black racism that we saw manifested in Minneapolis and too many places.”

Angelenos have participated in similar protests in the past. The 1992 Los Angeles Riots happened in South L.A. after a jury acquitted four LAPD officers for using excessive force in the beating and arrest of Rodney King. The violence was caught on camera by a bystander and broadcast across America, yet the officers walked away with no charges.

Similarly, only one of the four officers involved in the recent killing of an unarmed black man, George Floyd, has been arrested. When CNN reporter Sara Sidner asked Minneapolis Police Chief Medaria Arradondo on live television if justice would be served, he said the three officers who haven’t been arrested yet are “complicit” in the death of Floyd.

“Being silent or not intervening, to me, you’re complicit. So I don’t see a level of distinction any different,” Chief Arradondo said. “My decision to fire all four officers was not based on some sort of hierarchy.”

Everyone needs to watch this interview as my colleague @sarasidnerCNN passes along questions from George Floyd’s family directly to the Minneapolis Chief of Police in real time. Wow. #GeorgeFloyd pic.twitter.com/NXHIJ60rhO

The LAPD has implicit bias training, which Mayor Garcetti described as “unpacking prejudices.”

“That is the necessary work to find common ground and to listen to activists who are saying, ‘I don't feel humanized. I don't feel like somebody with a badge knows my experience and who I am, or I think they might harbor some prejudice.’ The only way you can get to that with 10,000 individuals is to allow them to have that space to learn it, to feel it, and to realize they might act on it.”

During these protests, Angelenos have been calling out to “defund the police.” Mayor Garcetti said the LAPD only accounts for 17 percent of the city’s budget. L.A.’s budget summary for the fiscal year of 2019 to 2020 confirms that 16.19 percent of the city’s revenue is allocated to police.

“Our first responsibility of course is our basic city services from firefighters to picking up the trash and making sure when someone’s in a domestic violence situation, human trafficking, has been raped, their house broken into,” Mayor Garcetti said. “We're always going to and we should support a police force. It's not about getting rid of the police. It’s about making sure that we have the culture in policing, the training in policing, that supports lives.”

In addition to giving out Medals of Valor to LAPD officers, the city also grants medals for preserving life.

Mayor Garcetti described this as “moments when you step back, when you could have used force, but somebody might have wound up dead… Whenever we can save a life, it is an important life.”

“It’s about youth programs; it’s about raising the minimum wage; it’s about making community college free; it's about banning the box; it's about hiring people when they're coming out of jail, all things that we've worked with activists to do in this city,” he said. “I hope in the next couple days, we’re going to show some ways to lean in even further, to deal with the trauma, to bring people together, and to make the investments to go even further in a city that is well on that road.”

While the nation’s attention is focused on Black Lives Matter protests calling for police reform, the world is still in the midst of the COVID-19 pandemic. While many protesters are wearing masks, being in close proximity with others is one of the fastest ways to spread the novel coronavirus.

“I pray that it won’t kill more people because folks are coming together, especially those who are already outraged or who are disproportionately from communities that demand justice, to see even more spread happen,” he said. “We’ve worked so hard from the beginning of this to identify that this virus does not discriminate equally, and that we have to do everything we can… to go into poorer communities with testing to make it free and make it universal.”

Update on County-run #COVID19 testing sites: Due to concerns of public and staff safety, some sites will be closed/operating on modified hours today. All residents with an appointment at an impacted testing site will be notified to reschedule. More info: https://t.co/woPZHhtG5z pic.twitter.com/aplRGpngKH

During this week’s unrest, many coronavirus testing sites were shut down. Mayor Garcetti said this is because volunteers didn’t feel safe working there as people were breaking into buildings around them. Dodger Stadium, the biggest testing center, is open.

“I hope people recognize: We need to be outraged, we need to have a place for our grief and that rage, but we can’t let the rage consume us. We can't let it slow us down in the fight against COVID-19,” he said. “We can’t let it penalize stores that of course -- we have to distinguish between looters and protesters -- but a protest, large-scale, with enough people, can hide looters and position them.”

"That’s not fair to the movement... or to the urgent work we have to do to make sure that George Floyd did not die in vain." pic.twitter.com/euwh3eeeRW

“Let’s think through how we can better express ourselves while not giving them the ability to shift what the images are, shift the conversation, say, ‘This is what is happening in L.A. L.A. isn’t about justice, it’s about stealing.’ That’s not fair to the movement or to us or to the urgent work we have to do to make sure that George Floyd did not die in vain.”