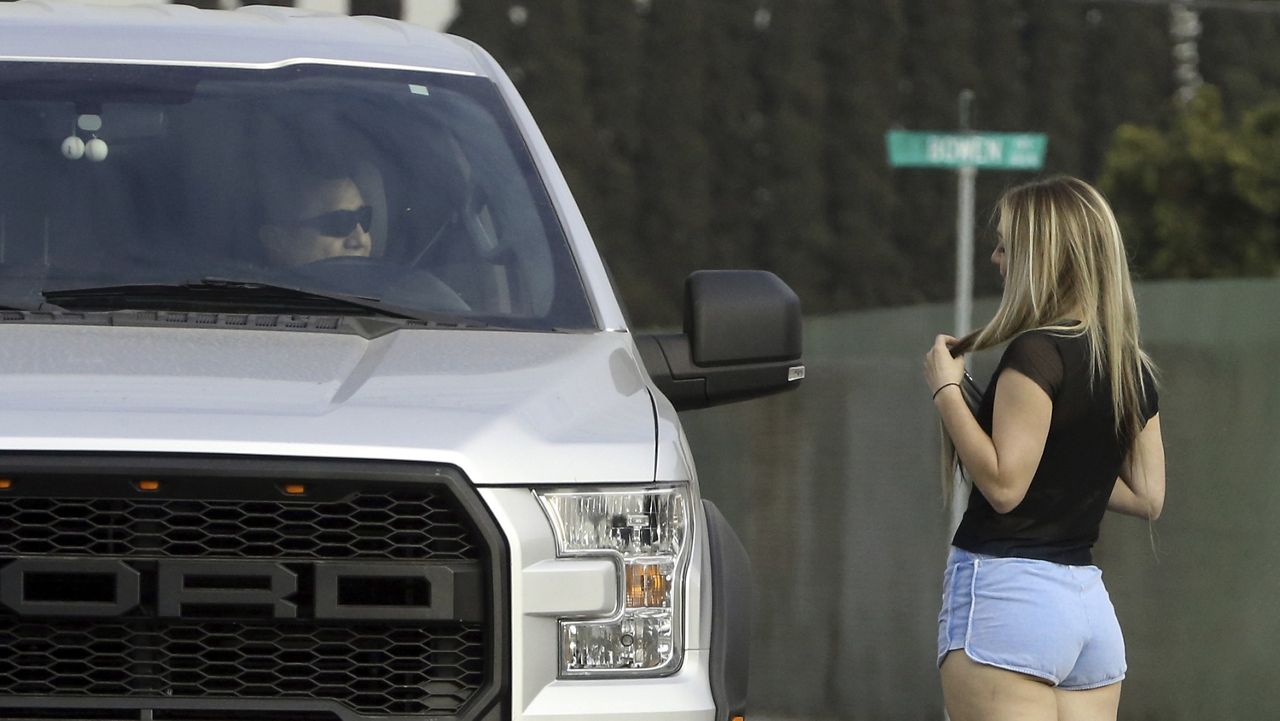 In this Wednesday, Nov. 15, 2017 photo, an undercover sheriff's deputy posing as a prostitute talks with a man who stopped to talk with her in Compton, Calif., a city some 15 miles south of Los Angeles. He never uttered the magic words that would have gotten him arrested and went on his way. For hours, Los Angeles County sheriff's deputies listen to the same scenario play out over and over: men pull up alongside a woman pacing in front of an abandoned storefront in Compton and proposition her to have sex with him. They soon found themselves in handcuffs. The women were undercover Los Angeles County sheriff's deputies posing as prostitutes in a sting operation aimed at stemming the demand in the commercial sex industry. (AP Photo/Reed Saxon)

Dr. Stephany Powell keeps the drawers in the Journey Out office full of supplies for sex workers – everything from dental care items to condoms.

“If where they are, is that they're still out on the street, we want to provide them a sense of empowerment, and safety. And so as a result of that, we do give out condoms,” Dr. Powell said.

What Makes Dr. Powell so valuable to the organization is her years of experience as a part of LAPD’s vice squad. She says one of her greatest achievements was the transition of enforcement from the victims to those who help perpetuate trafficking.

It was on Sepulveda where she worked undercover and made one of her most infamous busts.

“I was standing out here, and I was working. But I was in plain clothes. And he actually approached me, because he thought I was one of the girls. And so we made it an arrest, right here an actual pimp,” she said.

It’s because of that experience that Journey Out has crisis managers that regularly go out overnight to seek out women who work the trade.

“There was no support at all. Even though I had to do things the hard way and by myself, like this is great to see how far we are now,” Thorton said.

Understanding the dangers, Thornton and her team keep things brief whenever they encounter a girl.

“Sometimes they give us their real names. But we don't want to force them into giving us their real names. So we just ask them to give us any name. So for our stats, we want to know what race and how their demeanor is. What streets that they're working, just so we could keep track of it,” Thorton said.

Giving out the packs of condoms and toiletries keeps both them and the girls safe.

She says the reason why this issue continues is culturally systemic.

“Prostitution, culture, from the music, the things that you see on TV … some girls may think sometimes, there might be this one guy who might see me for more than what I am and want to see them from this. Or, I just need to hit this one last one, and then I'm done. And that last one becomes the next one, the next one. So it's, it's a vicious cycle,” Thorton said.

Thornton along with everyone else in Journey Out believes that each one of these girls hold great potential.

“So if you were to take that same mindset, that same hustle that you had in the streets and you wanted to take it into something that's more productive, and legal, you know, there's no limit to where they can go,” she said.

With hard work they will be able to unlock it all.

If you’d like to learn more about Journey Out, you can find their various programs online at journeyout.org.