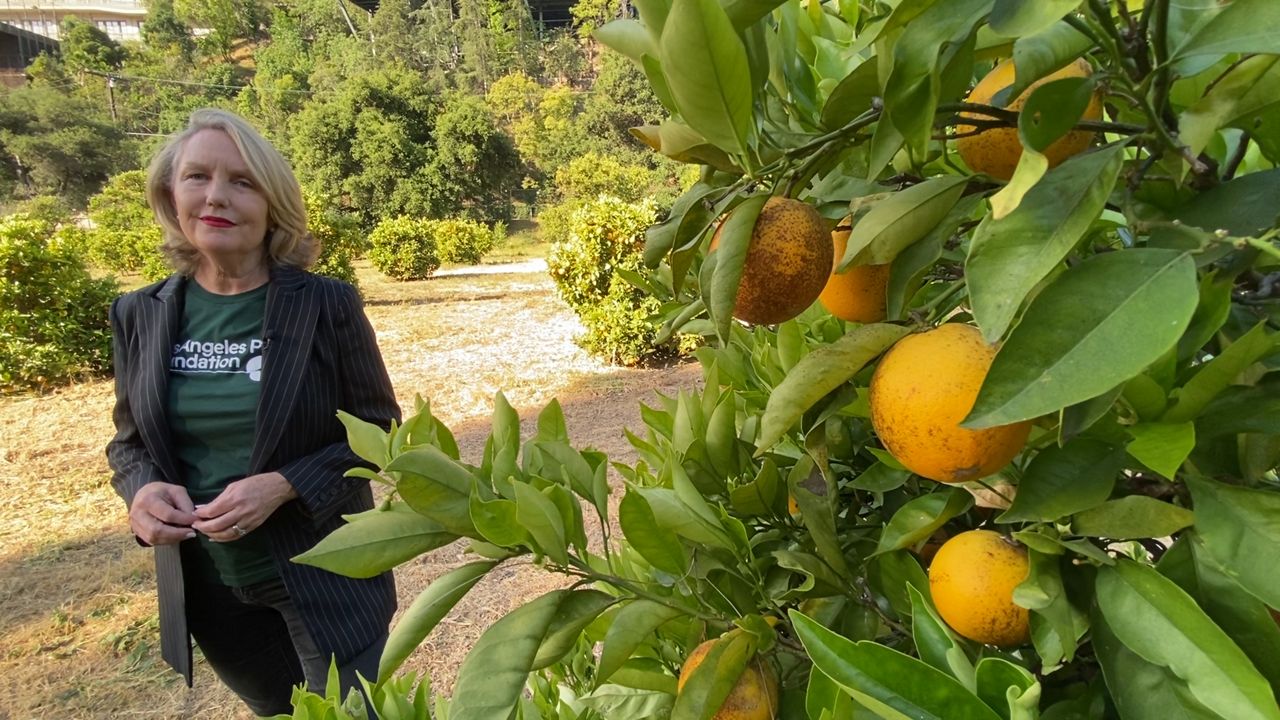 BEVERLY HILLS, Calif. — Ceci Mak knows how to pick ‘em. She fell in love with gleaning the very first time she volunteered for Food Forward and now she’s practically a pro, her personal toolbox bedazzled with a crystal Hello Kitty decal.

“I’ve blinged out my own toolbox,” she admitted with a giggle. “This is probably about my 60th pick.”

She’s also known to arrive with some extra hands, recruiting friends and sometimes her boyfriend Chris Workman to help.

“I had no idea this existed,” Mak said. “I’ve driven by probably hundreds of times.”

Carolyn Ramsey has heard that before.

“That’s the first thing that people say,” she said a few days prior to the last pick of the season.

Ramsey is the executive director of Los Angeles Parks Foundation, which oversees the historic grove that dates back to at least the 1950s. The Los Angeles Department of Water and Power purchased the parcel of land when they were building the Franklin Canyon Reservoir nearby. The grove sat unattended for decades. Then the LA Parks Foundation came in 2012 and began a massive restoration project, putting in irrigation and removing dozens of dead trees.

“Then we planted over 100 new trees,” Ramsey explained, bringing the total number of trees now to around 200. “This is a really healthy and fruitful orange grove. It’s producing a lot of fruit.”

This is where Food Forward comes in, arranging volunteers to harvest the Valencia and navel oranges — fruit that otherwise would have been wasted — and passing that produce directly to soup kitchens and homeless shelters, including MEND, Mutual Aid Action Los Angeles, Seeds of Hope and Project Angel Food. To date, backyard harvest coordinator Griffin Maduzia said they’ve picked about 180 pounds of citrus here.

“Which equates to about 700,000 servings of oranges,” he said. “It makes an incredible difference not just in feeding people but feeding people nutritionally.”

He’s seen all kinds of volunteers show up for picks at this grove from entertainment industry professionals like Mak to youth volunteers and retirees.

“It’s just so awesome that 20 to 25 people are willing to take time out of their Saturday morning, wake up early to pick this fruit,” he said as he loaded boxes full of oranges into the back of his car, “and it’s so awesome to hear the stories of people afterward who enjoyed it so much.”

When they took over the property, Ramsey said the LA Parks Foundation didn’t just want the grove to survive. They wanted to make sure it served a purpose. This is truly a partnership, she said, with funding and support coming from the David Bohnett Foundation and City National Bank, plus the help of volunteers and the already established relationships of Food Forward.

“We’re so thrilled that all the food goes to hungry Angelenos,” Ramsey said. “Soup kitchens and homeless shelters are so delighted to get fresh produce right off the tree. It’s a win-win-win-win-win-win. It just works on every level.”

As for Mak, she savors the opportunity to spend a few hours in nature communing with trees meaningfully.

“Sometimes I feel like I have conversations with the tree, but for the most part, I find it just so relaxing to be picking and to be outdoors and just thinking about how much I’m helping the community,” she admitted.