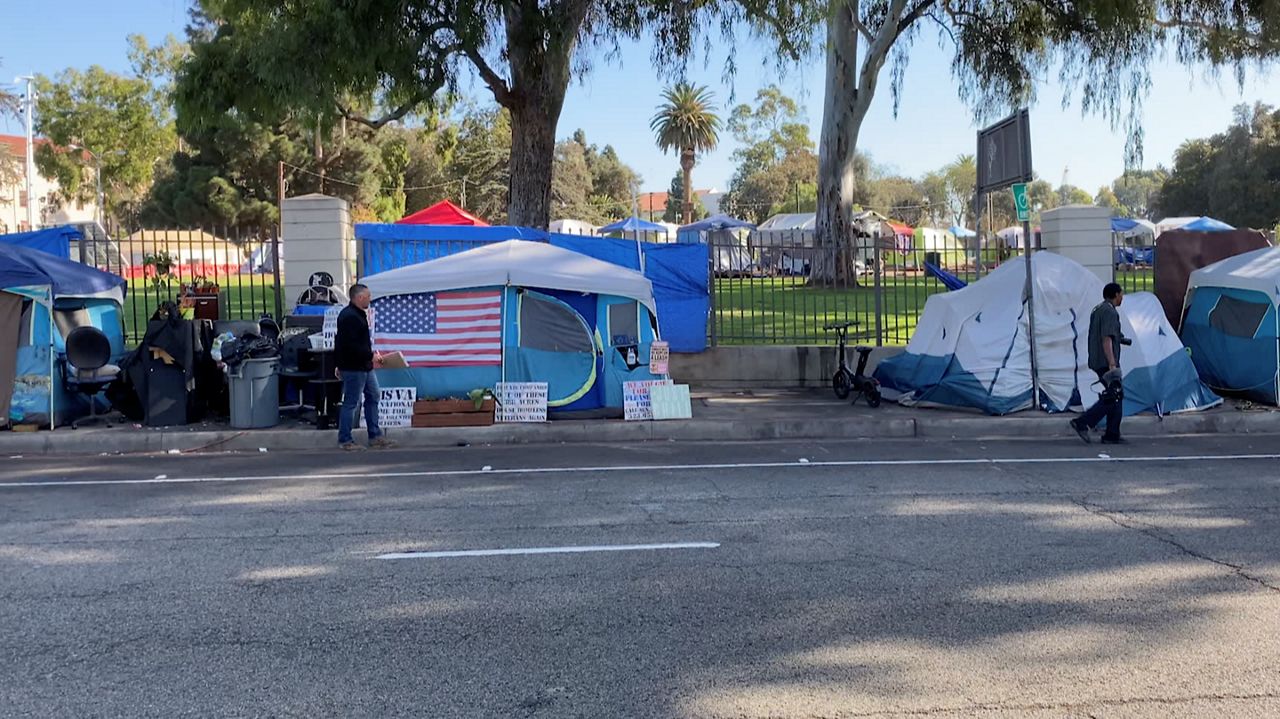 At last count, there were an estimated 3,900 homeless veterans in the LA area. (Spectrum News/Catalina Villegas)

Veteran advocates want investigation into whether delays led to 2 deaths

LOS ANGELES — Robert Reynolds, who is a veteran, has made the journey from his home to the west LA Veterans Affairs almost every morning for the last three years.


Reynolds, an adviser for AMVETS, a congressionally chartered veterans’ service organization, goes to advocate for the homeless veterans who for years were living in tents along San Vicente Boulevard on the Veterans Affairs' sidewalk.

Even though those veterans are now in small shelters on Veterans Affairs property as part of the Care Treatment and Rehabilitative Services program (CTRS), it took blood, sweat and many tears to get to them off the street.

“It’s frustrating what happened. You spend nights just trying to make sense of it all,” Reynolds said.

What makes little sense, he said, is that in his opinion, the delays in getting vets into programs contributed in part to two killings on veterans’ row.

“Why wasn’t this done before? Why did it take two people losing their lives for that to happen?”

There were multiple reasons for the delays in services and housing. Sometimes the vets themselves resisted it, but other things stood in their way, from institutional limitations outlined in a recent RAND report to the pandemic.

“When the pandemic hit, there was a shortage of housing. They took the programs and reduced them to 50% capacity, so at that time we were at a standstill trying to get people inside,” Reynolds added.

In years of Veterans Row census records compiled by Reynolds and shared exclusively with Spectrum News, he documented how in March of 2021, The Domiciliary, one of Veterans Affairs' housing programs, had 25 veterans on a waiting list.

His documents also show how vets in distress ended up back at the encampment repeatedly. In an entry from March 12 2021, he wrote, “The veteran who attempted suicide last week has been released from the hospital and is back on veterans row.”

Right around that time, a veteran named Bryan Prentiss joined the encampment.

“It took two or three weeks to get everything in order so we could get him in,” Reynolds said.

On Friday, April 2, he got the green light to go into a housing program that following Monday, but Prentiss did not make it to Monday.

He died over the weekend after being run over by another veteran.

“I was in disbelief,” said Reynolds, remembering the late-night call he got from a Veteran.

“There was about a 200 foot strip of blood that went down and it was an s-shape and his body was down at the intersection,” Reynolds said.

In a letter to LA Veterans Affairs leadership shortly after the death, a high-ranking representative of AMVETS wrote in part, “He was told to wait a week on the street and while he was waiting, he was killed. The conditions of mental illness, lack of 24/7 service and ‘foot-dragging’ were reported to DVA by Robert Reynolds (and I know that emails were sent regarding the threat of these things happening) prior to the incident.”

All this time Reynolds kept sending ideas to Veterans Affairs on how to improve the intake process and cut the time vets stayed on the sidewalk.

“You know, I really thought after that first incident happened, I thought the VA, the county, everybody would throw out the cavalry and bring all kinds of resources to get everybody off the street. But that didn’t happen,” he said.

A few weeks later Reynolds wrote in his notes about another veteran Andre Butler, “he is paralyzed from the waist down. I told the staff that he needs to be inside because we can’t take care of him.” He ended the paragraph with “living in a tent is a death sentence for him.”

Butler was still at the encampment four months later when another veteran who had shown symptoms of mental illness stabbed him.

“This is where Andre died,” said Reynolds, pointing to an area on the sidewalk with spray paint. “You see, the guys wrote down their names, so you have Bryan and Andre.”

When Butler died in September, Veterans Affairs started making changes, including implementing some of Reynold’s suggestions.

By Nov. 1, the encampment was cleaned up.

During a press conference about veteran homelessness, Deputy Director for the Greater Los Angeles Healthcare System Robert McKenrick was asked if delays in services contributed in part to those deaths.

McKenrick acknowledged the delays in housing, including Veterans Affairs' failure to complete almost 500 units of housing by fall of 2020 as part of the 2016 Master Plan.

So far, only about 10% of the units have been completed, but McKenrick said Veterans Affairs' push to end veteran homelessness has sped up in the months since the tragedies.

“From October to December, over 700 veterans moved off the street and through housing initiatives,” McKenrick added.

At last count, there were about 3,900 homeless veterans in the LA area according to Veterans Affairs.

On the 100th day of the veterans moving off the sidewalk, Reynolds sent a letter to the Office of Congressional Ethics asking for an investigation.

“There definitely needs to be some accountability. The fact that two veterans can die outside the largest VA in the country is just absurd,” he wrote.

His goal, to make sure no more veterans’ names end up on the sidewalk.