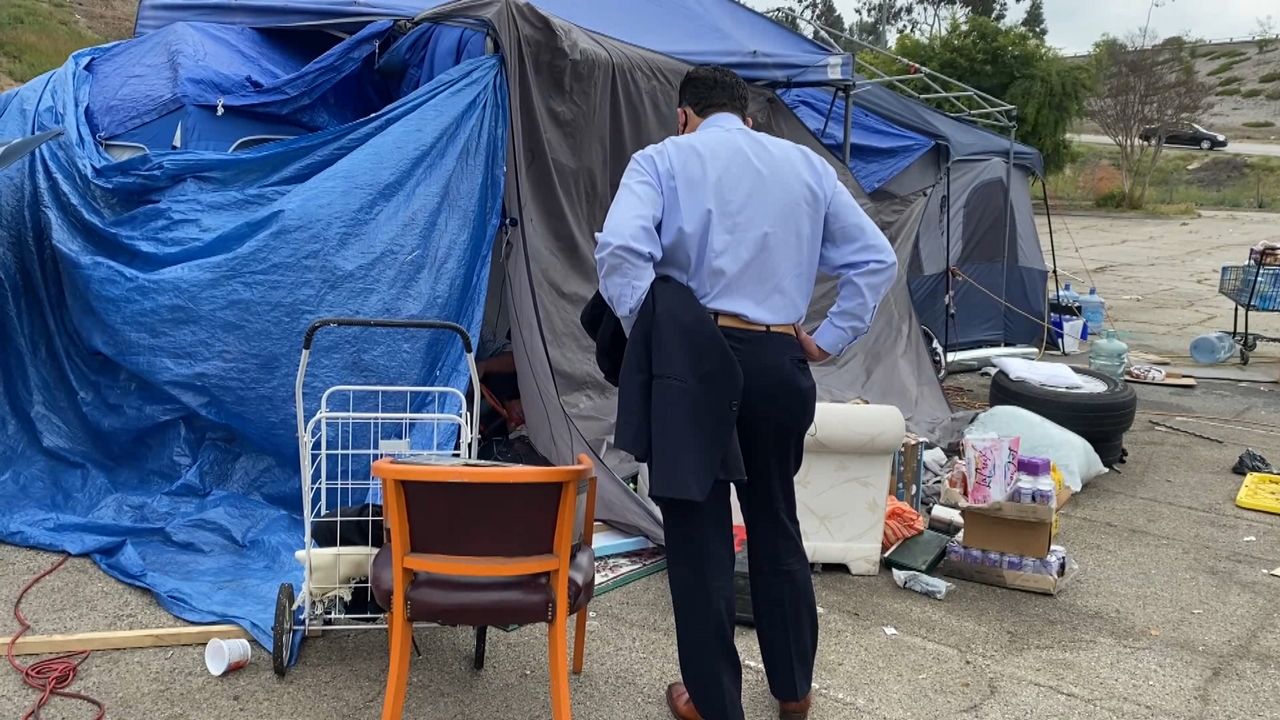 EAGLE ROCK, Calif. — The City of Pasadena cut its homeless population in half in recent years, and Mayor Victor Gordo says it's thanks the approach his city has taken.

“The City of Los Angeles certainly have the resources in its fire department and social workers to be out here transitioning these human beings into motels, as they look to transition them into permanent housing,” Gordo said.

Instead, the City of Los Angeles partnered with the nonprofit Hope of the Valley to build tiny home villages that will house hundreds of LA's homeless, including one replacing Eagle Rock Recreation Center's parking lot, where there are over a dozen homeless encampments. The location — 7570 N. Figueroa St. — is about a half a mile from Pasadena’s border.

Mayor Gordo explained how he, along with nearby neighborhoods, was blindsided by this LA City project.

"I would’ve hoped that our neighbors in LA and the proposed operators would’ve reached out to the City of Pasadena and the residents who live about 500 feet away," he said.

Councilman Kevin DeLeon, representing district 14, set a goal to create 25,000 new housing units for homeless people by 2025. That includes permanent and temporary housing. Tiny home villages coming to Eagle Rock and Highland Park would be just under 400 of those 25,000 units.

Congressman DeLeon’s office said they don’t normally consult or engage another municipality with proposals and projects within the City of LA. So they did not feel it was necessary to notify neighboring cities, like Pasadena, of this project.

While checking in with some of the people living in tents at Eagle Rock Recreation Center parking lot, it was apparent to Mayor Gordo that mental health issues and addiction are the bigger problem.

“Safety and security is important," he said. "Services provided to residents are important. We can’t just store people and expect them to succeed.”

It’s also concerning for Ghaz Bazrafshan, an Eagle Rock resident and outreach volunteer for the Northeast LA Community Response group. She knows firsthand how complicated this issue is, having recently moved a homeless man off the sidewalk into a tent.

She returned a day later with a meal, hoping to connect the man with homeless services.

"All of the stuff is in a trash can near where we set him up, and he’s gone," said Bazrafshan.

From what she’s witnessed in her efforts, Bazrafshan realized housing isn’t the only answer.

"[Homeless people] need mental health services, and they also need resources to get into drug rehab or some sort of rehabilitation facility," she said.

Tiny home villages are meant to be all encompassing — beds, showers and meals, as well as services for permanent housing, job assistance and mental health. But Mayor Gordo noted that he still doesn’t see this as a fitting answer to this complex humanitarian crisis facing LA County.

"It’s not a Band-Aid that’s going to fix [homelessness]. These are gaping wounds, emotional wounds, economic wounds that bring people into this situation," he said, adding that he believes it will take collaborative support from all of LA County to one day get a handle on homelessness.