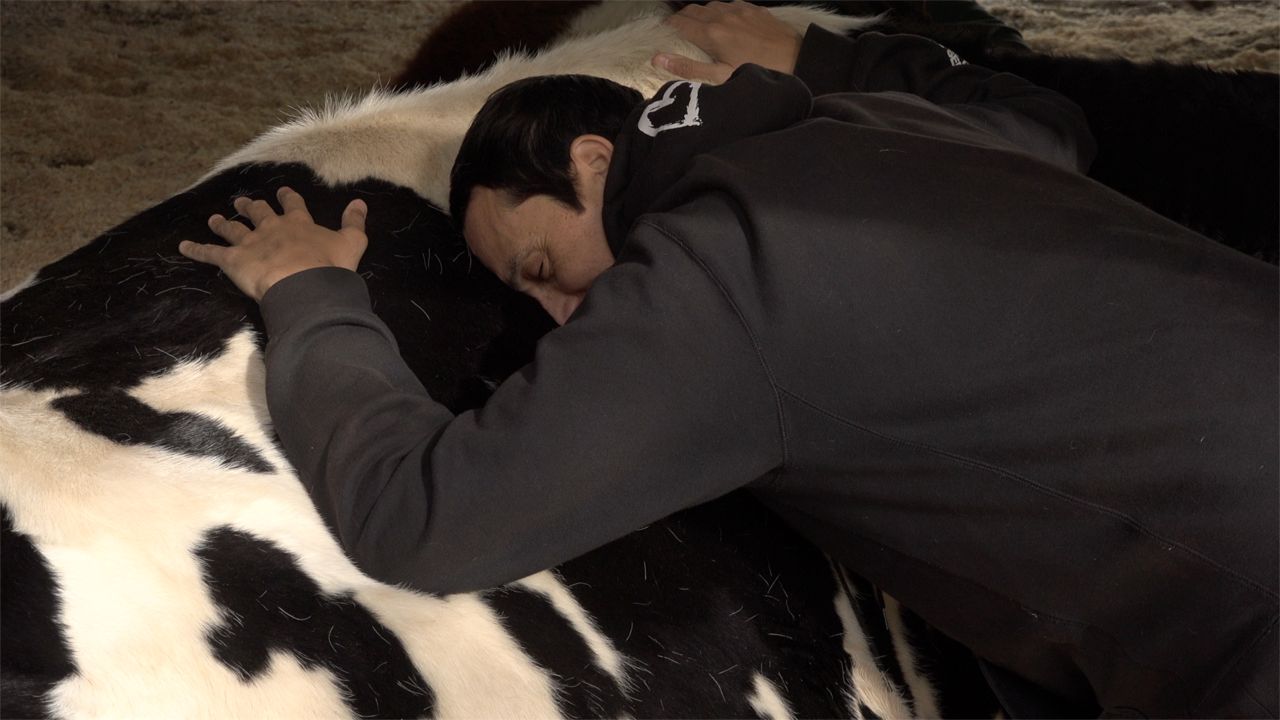 SANTA CLARITA, Calif. — Samson Schulman, a second-year graduate student, is seeing his therapist for a second time. He recently went through a break-up. He's feeling depressed, and he has some anxiety.

"I brought all that in with me when I stepped out of the car in the parking lot," Schulman said as he slowly walked into his therapy session.

Schulman's treatment doesn't happen up in some medical building but, rather, "down on the farm."

And Schulman's therapist isn't a licensed clinician. She doesn't hold a single degree in psychology.

But she does have four stomachs and two huge, hypnotizing eyes.

"I'm so relaxed," Schulman said as he hugged the therapist in a bed of straw.

Schulman's therapist is a cow.

He is at an animal sanctuary in Santa Clarita called "The Gentle Barn," a nonprofit founded by Ellie Laks. Laks explained the concept behind her animal shelter as she drove around the property on a golf cart.

"The Gentle Barn is home to rescued animals," Laks said. "It's about healing the animals so that they can heal people. We are home to horses, donkeys, pigs, sheep, goats, chickens, turkeys, peacocks, llamas, dogs, cats, donkeys, pigeons and parrots."

Laks offers a wide variety of animal encounters. But she said that among her menagerie, the most divine are bovine.

Laks stopped the cart in front of a brown cow sticking its head out of a fence.

"This is John Lewis," she said. It's a young bull she rescued and raised inside her home during the COVID-19 lockdown. John Lewis is now a therapy animal.

One day, about 20 years ago, Laks was stressed out. She went into the barn and found comfort with a cow.

"And when I was in distress," Laks said, "she would wrap her neck around me and hold me. And I knew, right then and there, that for the rest of time, everyone that came to The Gentle Barn had to have a cow-hug."

"When you're standing next to a cow that outweighs us by thousands of pounds," Laks explained, "they're choosing us. They have the power to escape and run away. So, the affection is reciprocal. And, so, there is something extra magical about it."

Although not a substitute for clinical therapy, some mental health professionals like Dr. Daniel Kostalnick, a clinical psychiatrist, said animals can be healing.

"In my opinion," Kostalnick said, "animals are absolutely therapeutic. They can help people with many types of diagnoses from anxiety to post-traumatic stress disorder, and depression."

Kostalnick points to the pharmacology behind animal therapy. He said being near an animal releases oxytocin in the human brain to help them feel more calm and relaxed.

Laks offers regular "sessions" with her cows, which, she said, are indeed a kind of therapist.

"Instead of sitting on a couch and talking," Laks said, "you're hugging cows, you're meditating in the barnyard, you're feeling the peace and stillness."

Laks guided Schulman during his therapy session. She kneeled next to him and the cow.

Laks told Schulman to "see if you can synch up your breathing with hers."

Schulman lets out a deep sigh with his head buried into the side of the cow. The cow stared straight ahead. While Sampson's cow-counselor chewed her cud, Schulman cuddled.

"Man, it's like I'm on a tropical vacation," Schulman said, his voice muffled by the cow's fur.

"Thank you, Holy Cow," Schulman said as he stood up. "Thank you."