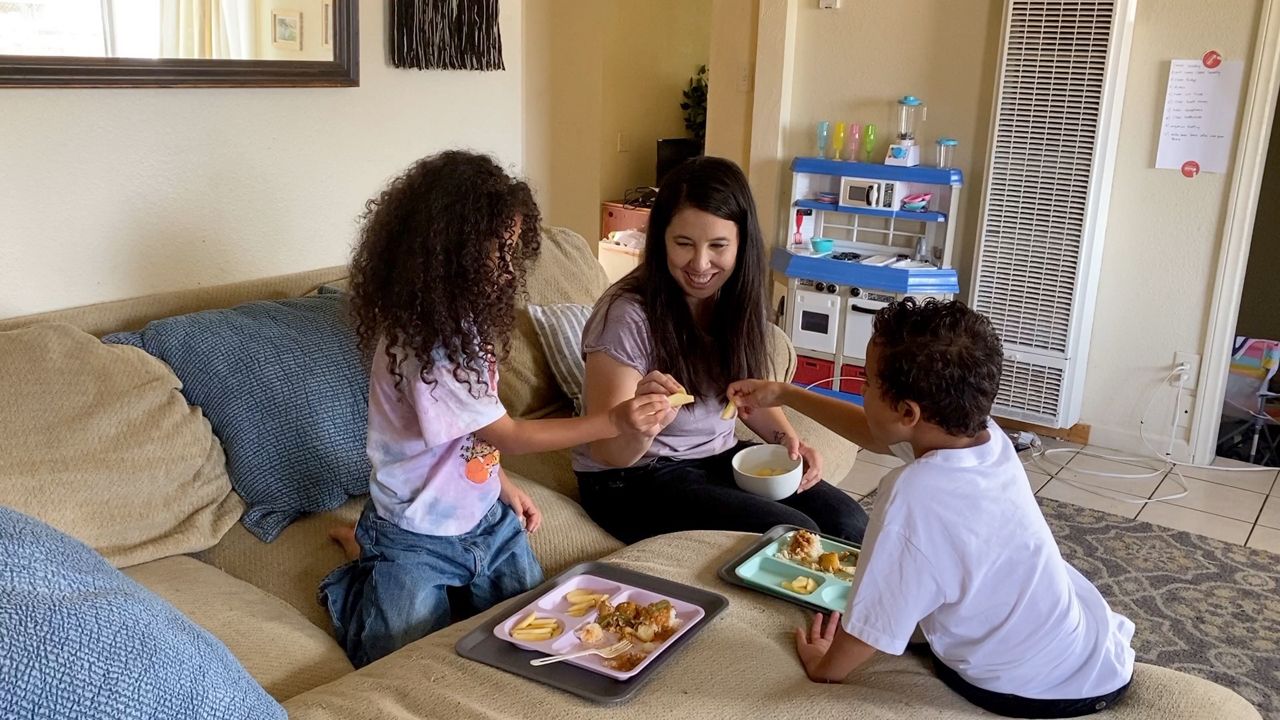 Kristine Peters and her family adhere to a vegan diet. (Spectrum News/Bree Steffen)

Kristine Peters and her family adhere to a vegan diet, no meat, dairy or other animal products. She is a mom to twins, so on top of all her other parenting responsibilities, she has to make her children specialized lunches every day before she sends them to school, since there aren’t any options for them once they get there.

“They had a pizza party for their last week of school but, obviously, absolutely no options for them,” Peters said. “So we had to pack, you know, a whole pizza and snacks for them just so they could feel like they’re included.”

Peters was excited to learn that California just became the first state to support plant-based school meals with a historic $700 million investment.

“It kind of normalizes things a little bit more for them, and then they feel less kind of like an outsider.”

Gov. Gavin Newsom approved a $308 billion state budget, with $100 million to be used to support schools in procuring plant-based foods, as well as sustainably produced foods, California-grown foods and foods to accommodate the dietary needs of students. An additional $600 million will be invested in upgrading school kitchen infrastructure and in training and compensating food service workers.

Kate Jarvis is part of the Food Service Innovation Team with Farm Animal Protection at the Humane Society of the United States. Their job is to create healthy, nutrient-rich and delicious plant-based recipes and then teach companies and schools how to make them.

“One of my personal favorites are these mushroom street tacos with a cilantro cream sauce,” Jarvis said, scrolling through the recipes. “I’ll let you just take that in for a second. Yes, it is as good as it sounds.”

Research shows that healthy, protein-rich plant-based foods like lentils and beans are 26 to 34 times less carbon-intensive than beef.

Jarvis says eating less meat is an easy way to help the environment, and her team will help anyone who wants to learn more.

“We are there to really help legislation like that manifest and actually become concrete, actionable parts of everybody’s day-to-day lives,” she said. “It doesn’t have to be overhauling your entire diet overnight. It can just be a conscious decision to eat one plant-based meal a week.”


The new funding comes after years of effort by Assembly member Adrin Nazarian, school districts, parent groups and nonprofits in the environmental, health and animal-rights sectors that would incentivize California schools to expand plant-based options.

“After working on this effort for many years, I am very excited to see plant-based foods are included in this year’s budget,” Nazarian said. “Having this optional program for schools, in addition to their existing meat and dairy menus, will allow for an inclusive selection for the student populations that need this. Many school districts across our state have a sizable student population that requires or wants plant-based or restricted diet options included within their school lunch program and cannot afford the higher prices. This year’s budget is a sizable step toward offsetting those costs so that schools can respond to their student’s needs.”

Under the program, state funding will be used to reimburse K-12 public schools for the costs of expanding their plant-based food and beverage offerings.

Peters knows it won’t change overnight but hopes one day, her kids will have more variety — not just in school, but also in life.

“Having more options like everywhere,” she said. “And just making it become a little bit more normal.”

A 2021 Friends of the Earth analysis found that only 4% of entrée options available in California’s schools were plant-based, with half of those being nut butter and jelly.