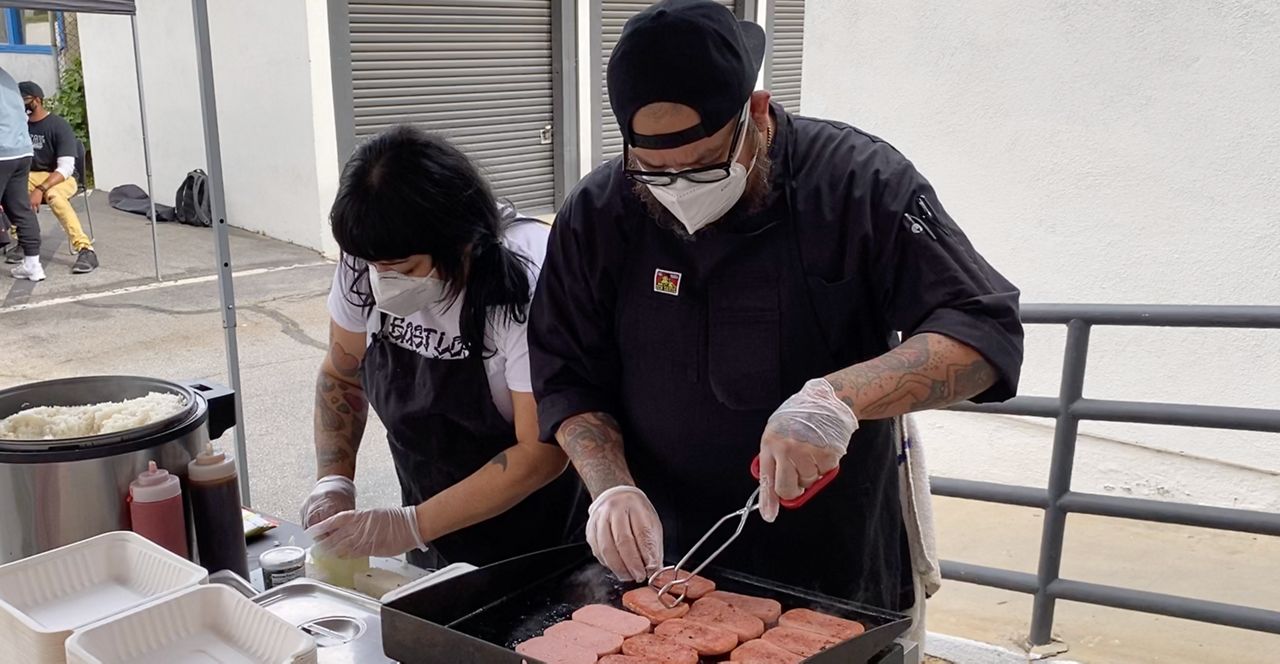 EAST LOS ANGELES — Spam Musubi is a popular snack in Hawaii that East Los Angeles couple Doreen Nakama and her husband Adam Martinez have added their twist to.

The couple would pop up on the street to cook the delicious treat, vaquero style, before the pandemic hit.

"When everything was shut down, and we were home, a lot of our friends kept asking when we were cooking, and we were like 'Oh, it's not safe for us to be here out on the street' and so we started making lunch plates for friends to pick up," Nakama said.

Word got out through social media, and that's when the business started booming for East Los Musubi, a street-style pop-up kitchen.

Nakama and Martinez started "East Los Musubi in Highland Park, and now they pop up in different cities, serving different types of Spam Musubi, from the original with Teriyaki sauce, to a recipe that includes flaming hot Cheetos.

"It's an experience, especially seeing us, they kind of wonder, like how did you guys start doing this? Or why do you serve Musubi, which is such a niche cuisine?" Martinez said.

It's a question Nakama loves to answer.

"Then I get to tell them the story of why I do it, how I grew up, why I eat this, and the memories that it brings back for me, that's like my favorite part," she said.

That story begins with her grandfather Alton E Nakama, a Japanese American soldier from Hawaii who served as part of the 442nd regimental combat team. Before heading out to the Korean War, he went on a day trip with his fellow soldiers to Tijuana, Mexico.

While he was in Mexico, he met Guillermina Urias, a young woman running a tiny shop. They spent the entire day together and fell in love. Nakama's grandfather promised her he would return after the war and marry her, and he did. The couple then moved to East Los Angeles, where they raised their family.

"It tells a story of my grandparents, their story of making a blended culture work here in LA and just being from such different backgrounds," Nakama said.

By sharing her food, Nakama believes she's sharing her culture, the Spam Musubi, her grandfather was raised on with an LA twist.