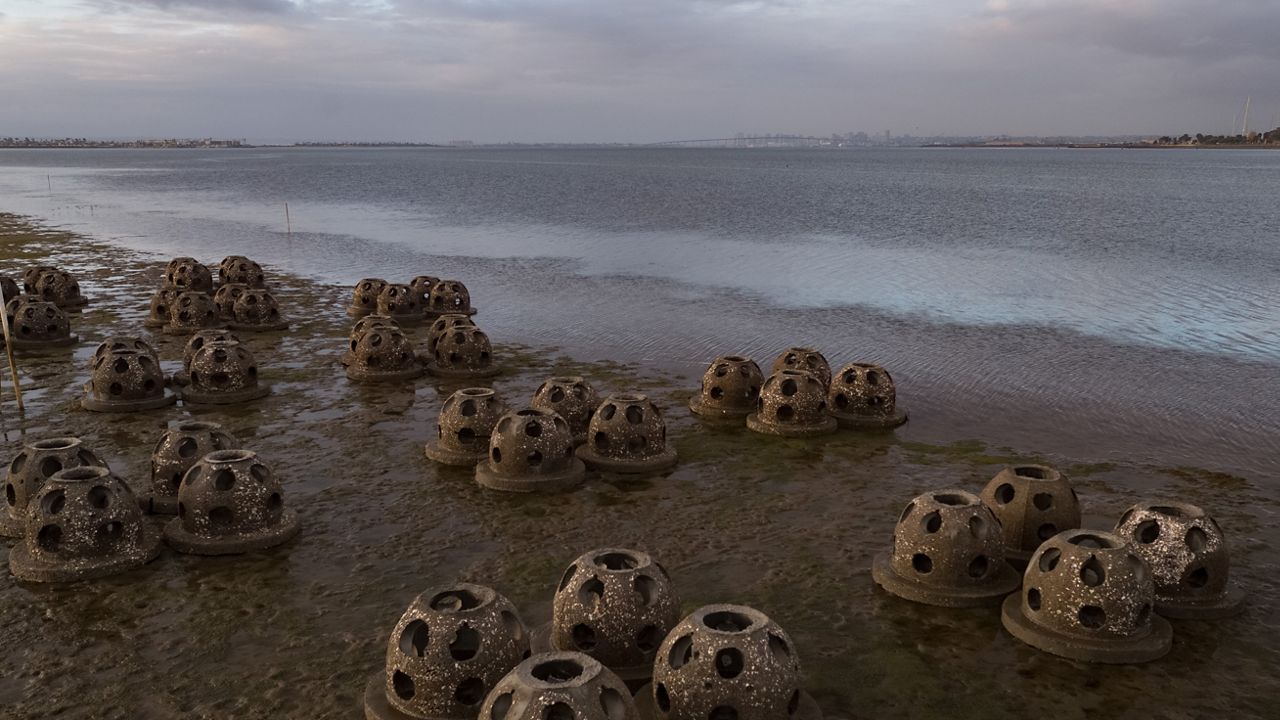 Maher is the director of environmental conservation with the Port of San Diego. Her team hopes to save San Diego South Bay’s future by creating reef balls.

“The reef balls are made of cement, sand and the oyster shells,” Maher said. “And oysters are attracted to locations where other oysters live.”

After years of planning, the installation of the South Bay Native Oyster Living Shoreline Project is underway, adjacent to the Chula Vista Wildlife Refuge.

Researchers are utilizing oysters to stabilize shorelines in place of the traditional hard armoring such as rip rap revetment and sea walls. Scientists say sea level rise is inevitable, set in motion by emissions released decades ago.

The Port of San Diego added 360 reef balls in the bay, hoping they will stabilize shorelines, stop erosion and attract more wildlife. Oysters act as nature’s Britta filter, not only storing carbon but also cleaning the water.

Dr. Jeff Crooks was an adviser for the project. He works for the Tijuana River National Estuarine Research Reserve and the Southwest Wetlands Interpretive Association and has been working in the area for decades.

“These are all examples of restoration projects we can do to help nature help itself, and then help us at the same time,” Crooks said. “That’s what gets me excited, where we do the win-win. Where can nature win and where can people win.”

The pilot project will be monitored and assessed for five years. Researchers will study the growth of native oysters on the reef balls, while learning how they impact or enhance local species.

“That’s what I really hope to do, is to learn lessons that as we move forward and move into this era of really rapid change, we have a new tool in our tool belt to try and help people and help nature at the same time,” Crooks said. “We do need to pay attention to what’s happening and make sure things are going the way we think they will and learn lessons, and then when we do it next time, we can do a better job.”

Maher said their project is starting to gain traction around the U.S. as other cities look to restore their coastlines.

“It’s really exciting that we can share this project with other people and it’s starting to get interest throughout the state,” she said. “There are other ports that are looking at this project now and are saying, ‘Hey, we should be doing the same thing.’”

According to Maher, it only takes about two gallons of oyster shells in each reef ball. The port is hoping to install more of them along the coast in the future if the project proves successful. Similar projects are already underway in San Francisco, Tampa and New York City.