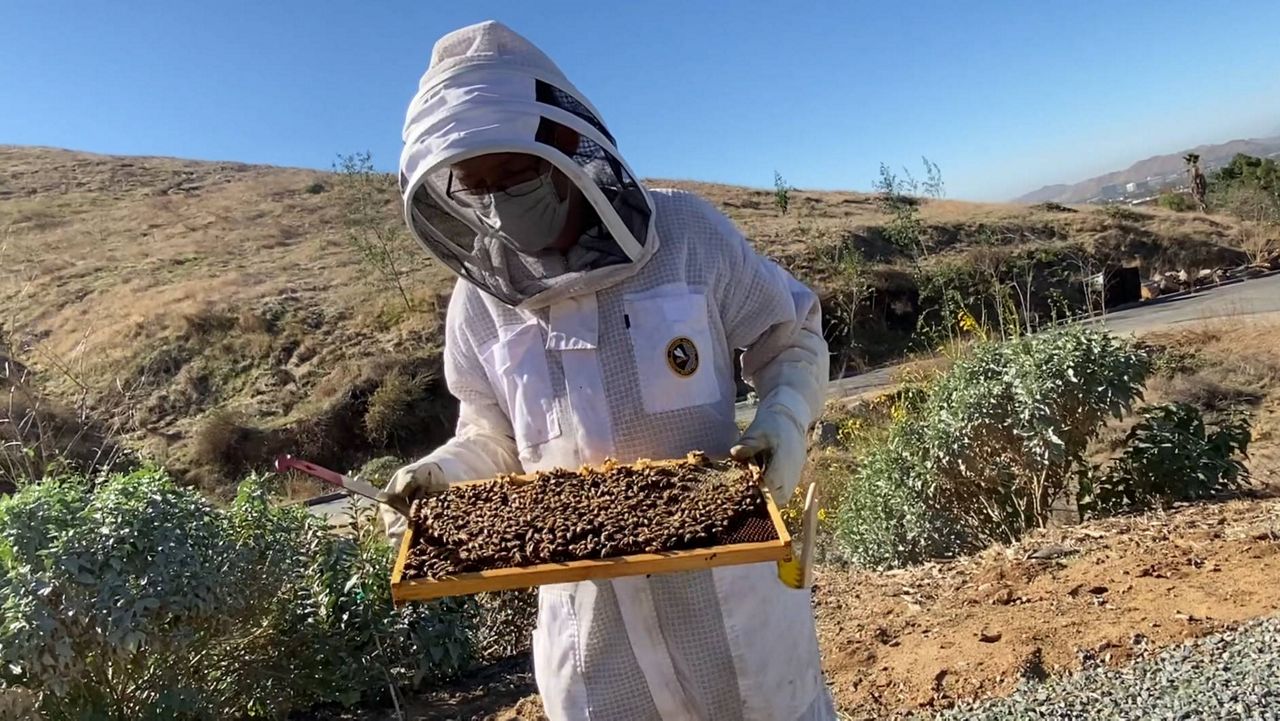 His grandmother had a garden with cherry trees, and as Dr. Baer recalled, each year there would come a time when he would step outside as a child in Switzerland and hear the buzzing. He recalls being able to smell the bees as well.


“For me that was the end of winter,” he said. “That was such a relief, certainly for somebody who lives in Switzerland.”

Even now, decades and a doctorate degree later, Dr. Baer can still lose himself in a hive, letting out an enthusiastic "woah!” as he removes one bee-covered section.

He has removed bees countless times before and still finds it just as fascinating as he did back in his grandmother’s garden.

“The more you look at them, the more you start to see things that you haven’t picked up before,” he said of the complex society that plays out in his hands. “Each bee here knows exactly what she has to do, whereas I don’t know how they decide that. And they don’t tell me.”

There is a lot the bees have not told him — or anyone — but over the next few years, he hopes to crack open the code of their communication in an effort to help prevent them from getting sick and dying.

Dr. Baer, his wife Barbara Baer-Imhoof, and their team at UC Riverside’s Center for Integrative Bee Research have joined forces with experts from the UC Davis, Merced, and San Diego campuses.

“We have chemists, we have engineers, software developers,” he said.

The goal is to develop what he describes as a honeybee health network. This hivemind will focus on three main objectives over a three-year grant project. One is bolstering breeding programs for healthier honeybees. The second involves developing new medications to make them less vulnerable to pesticides and parasites.

"In bees we only have, I think, three or four different medications that we can currently use to treat them for example against diseases," said Dr. Baer. "That has to change."

He hopes to base new medications on defenses the bees have already developed on their own.

The final aspect involves a bit of eavesdropping — deploying sophisticated sensors directly into the center of the hive.

“Then we kind of listen in, right?” Dr. Baer said. “It’s like Google translate for bees.”

Bees tend to recognize problems and communicate them through scents, which the sensors would be designed to detect, and like in humans, early detection is key.

“We know there is a smell for hunger, there’s a smell of dying, there is the smell of the queen,” said Dr. Baer. “If we pick that up, right, we can listen to their screams inside here that something is going wrong.”

Another key to this project will be collaborating with beekeepers across the state because, as he explained, this is not an academic exercise.

“We don’t want to be like nerds in an ivory tower,” Dr. Baer said. “We want to see this used one day by those who are the guardians of these animals.”

Eventually he would like this research to result in an app that will notify them when a problem has been detected in one of their hives.

“The earlier the beekeeper can know about this, the earlier he can intervene and much more likely he can save the colony,” he said.

Protecting honeybees, Dr. Baer said, means protecting our access to healthy, affordable food. More than 80 individual crops are insect-pollenated. That’s more than a third of all crop production in the country, according to the U.S. Department of Agriculture.

However, beekeepers have seen a major decline in colonies, a 50% drop in the last six years. It is a huge problem, and tackling it will keep Dr. Baer and his team busy for the next few years.

“I hope, and I think, it’s realistic that in three years we will have sensors in there [a beehive] and they will do their job,” he said.

Like the sound of buzzing on a warm spring morning in Switzerland, that kind of progress could mean things are about to change.