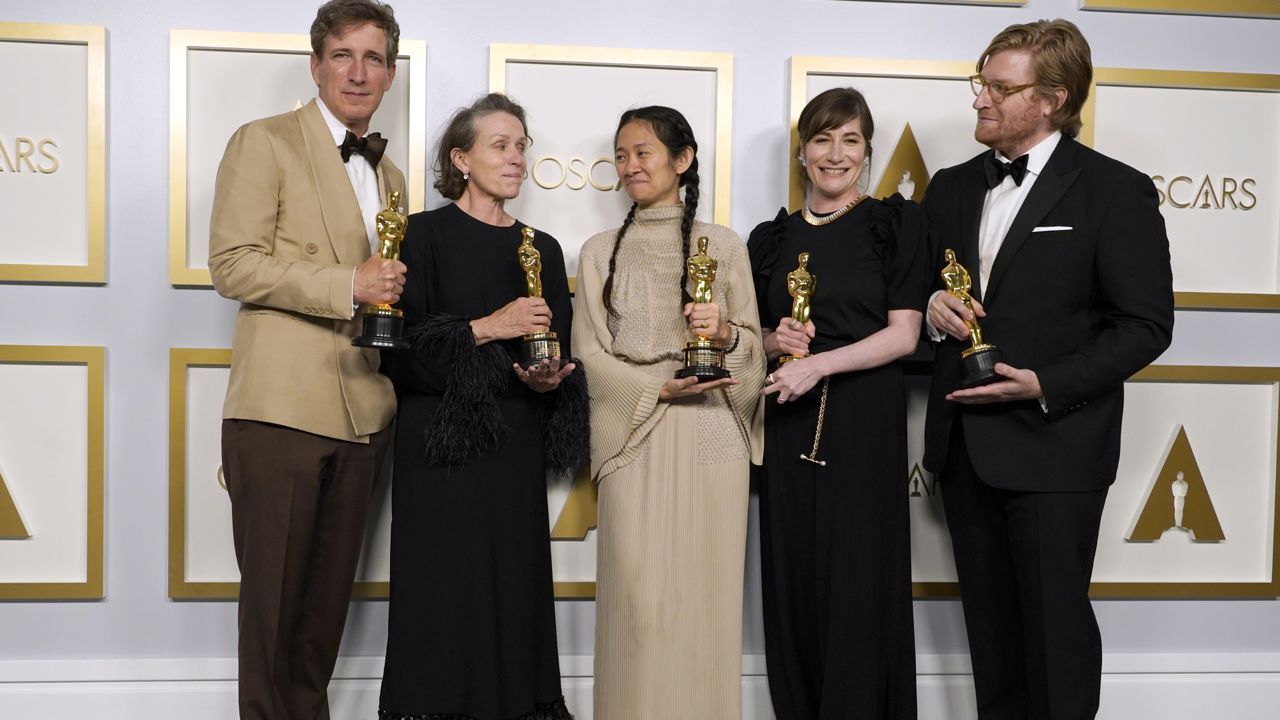 Anthony Hopkins, meanwhile, scored a small upset win in the best-actor category for his work as a man struggling to maintain his independence while his memory fades in "The Father." Many pundits had anticipated a posthumous win for sentimental favorite Chadwick Boseman in "Ma Rainey's Black Bottom."

The win was the second of Hopkins' career, following "Silence of the Lambs." Hopkins was not in attendance and had not pre-recorded an acceptance speech. He, however, said thanks in an Instagram video on Monday morning while honoring Boseman.

"At 83 years of age, I did not expect to get this award. I really didn't," Hopkins said. "And very grateful to the academy, and thank you. And I want to pay tribute to Chadwick Boseman, who was taken from us far too early."

But "Nomadland" was the big winner of the night. Zhao, accepting the best-picture award, gave thanks to the "nomadic community" and "all the people we met on the road."

"Thank you for teaching us the power of resilience and hope and for reminding us what true kindness looks like," she said.

Earlier in the evening, Zhao reflected on her upbringing when she accepted her historic Oscar for best director.

"I've been thinking a lot lately about how I keep going when things get hard," Zhao told the sparse crowd at downtown's Union Station, where the ceremony was moved in response to the COVID-19 pandemic. "And I think it goes back to something I learned when I was a kid. ... My dad and I used to play this game. We would memorize classic Chinese poems and texts and we would recite it together and try to finish each other's sentences. And there is one I remember so dearly, it's called the Three Character Classics. And the first phrase goes ... `people at birth are inherently good.'"

"And those six letters had such a great impact on me when I was a kid, and I still truly believe that today, even though sometimes it might seem like the opposite is true," she said. "I have always found goodness in the people I've met everywhere I went in the world. This is for anyone who had the faith and the courage to hold onto the goodness in themselves and to hold onto the goodness in each other, no matter how difficult it is to do that. This is for you. You inspired me to keep going."

McDormand, who took on the role of a woman recovering from loss as she travels in her van from place to place in search of work, offered a short speech while collecting her best actress prize, saying, "I have no words. My voice is in my sword. We know the sword is our work. And I like work. Thank you for knowing that. And thanks for this."

The win was the third of her career in the best-actress category. She previously won for "Fargo" and "Three Billboards Outside Ebbing, Missouri."

As part of the "Nomadland" producing team, she urged film lovers to see the picture — and all other Oscar nominees — in a theater.

"Please watch our movie on the largest screen possible," she said. "And one day very, very soon take everyone you know into a theater, shoulder- to-shoulder in that dark space and watch every film that's represented here tonight."

The win for Yuh-Jung Youn, 73, made her the first Korean actress to win a performing Oscar. She won for her portrayal of the feisty, outspoken family matriarch in "Minari."

She joked about the frequent mispronunciation of her name in Hollywood, saying, "Tonight, you are all forgiven."

She hailed her cast mates, saying "We became a family, and most of all, above all (writer-director) Lee Isaac Chung. Without him I couldn't be here tonight. He was our captain and my director. So thanks to you. Tremendous thanks to you."

She also hailed her fellow nominees, saying she didn't like to think that they were competing against each other, but on this night, "I have just a little luck. I'm luckier than you." She also thanked her "two boys who made me go out and work."

"This is the result because mommy worked so hard," she said.

Kaluuya earned his first Oscar for his supporting role in "Judas and the Black Messiah," portraying Chicago Black Panther leader Fred Hampton. He thanked Warner Bros. for making the film, noting, "It's so hard to make a film, and make a film about a man like this, and they made it happen."

He also dedicated the award to Hampton himself.

"To Chairman Fred Hampton, bro. Man. Man. What a man. What a man," he said. "How blessed we are to have lived in a lifetime where he existed. Thank you for your light. He was on this Earth for 21 years, 21 years and he found a way to feed kids breakfast, educate kids, give free medical care.

"This film was made by the most incredible people in the world who made it in 23 days and brought that genius and love and humor to it," Fennell said.

Christopher Hampton and Florian Zeller won for best adapted screenplay for "The Father." Zeller praised his collaborator on the film, and said he wrote the script specifically with Anthony Hopkins in mind, saying, "To me, he's the greatest living actor."

He thanked Hopkins for bringing "your energy, your grace and your talent" to the film.

"Sharing that journey with you was the most amazing experience of my life," he said.

Hampton, asked backstage whether the moment felt surreal, said, "Yes, particularly in these circumstances, since we're in different countries ... with masks on. It's unlike any other kind of Oscars ceremony I would imagine there's ever been. It is strange, but great."

The Denmark film "Another Round" was named best international film, and director Thomas Vinterberg gave an emotional acceptance speech, dedicating the award to his daughter Ida, who was killed in a traffic collision four days into shooting.

"We wanted to make a film that celebrates life, and four days into shooting, the improbable happened. An accident on the freeway took my daughter away," he said through tears. "... We miss her and I love her.

"We ended up making this movie for her as her monument. So Ida, this is a miracle that just happened. And you're a part of this miracle. ... This one's for you."

"Ma Rainey's Black Bottom" picked up a pair of technical awards — makeup and hairstyling for Sergio Lopez-Rivera, Mia Neal and Jamika Wilson; and costume design for Ann Roth. The black-and-white film "Mank" went into the Oscars as the top nominee, with 10, but it left with only two — cinematography for Erik Messerschmidt and production design for production designer Donald Graham Burt and set decorator Jan Pascale.

The prize for live-action short went to Travon Free and Martin Desmond Roe for "Two Distant Strangers," while the award for animated short went to Will McCormack and Michael Govier for "If Anything Happens I Love You." Both films deal with gun violence, with "Two Distant Strangers" focused on a police shootings of Black Americans, while "If Anything Happens I Love You" is about two parents who lose their daughter in a school shooting.

"This film started as a love letter to jazz, but we had no idea how much jazz would teach us about life," co-director Pete Docter said.

The award for best original song went to "Fight for You" from "Judas and the Black Messiah," with music by H.E.R. and Dernst Emile II and lyrics by H.E.R. and Tiara Thomas.

For documentary short, the prize went to "Collette," by Anthony Giacchino and Alice Doyard. The film follows a former member of the French Resistance as she returns to Germany for the first time in 74 years.

"My Octopus Teacher," by Pippa Ehrlich, James Reed and Craig Foster, was named best documentary feature. The film follows the bond formed between Foster, a free-diver, formed with an octopus he encountered while diving in South Africa.

During the ceremony, producer/actor/writer Tyler Perry and the Motion Picture Television Fund were both presented with Jean Hersholt Humanitarian Awards.

Thanks to COVID-19, the ceremony had a decidedly different look. Gone was the star-studded audience at the Dolby Theatre in Hollywood. The ceremony instead originated largely from Union Station, with nominees sitting at individual tables in front of a circular stage.

Since the Academy of Motion Picture Arts and Sciences decreed that the show would not be held in any way by Zoom, some international performers unable to travel appeared on the show from remote overseas locations.

There was no host, with show producers saying they wanted the ceremony to be an homage to movies and movie-making. Instead of "presenters," the Academy announced what it called "an ensemble cast" starring in the show.

Even the order of the awards was juggled, with the best-picture prize — normally the culmination of the evening — presented before the awards for best actor and actress.

While the actual ceremony started at 5 p.m. PT, the televised festivities began at 3:30 p.m. PT with a 90-minute pre-ceremony telecast special titled "Oscars: Into the Spotlight." That show, hosted by actor Lil Rey Howery and actress Ariana DeBose, featured the traditional performances of the five nominees for best original song.

The ceremony was then followed by another telecast titled "Oscars: After Dark" hosted by actors Colman Domingo and Andrew Rannells, spotlighting the evening's winners and highlights.

This article was updated to include Anthony Hopkins' remarks.