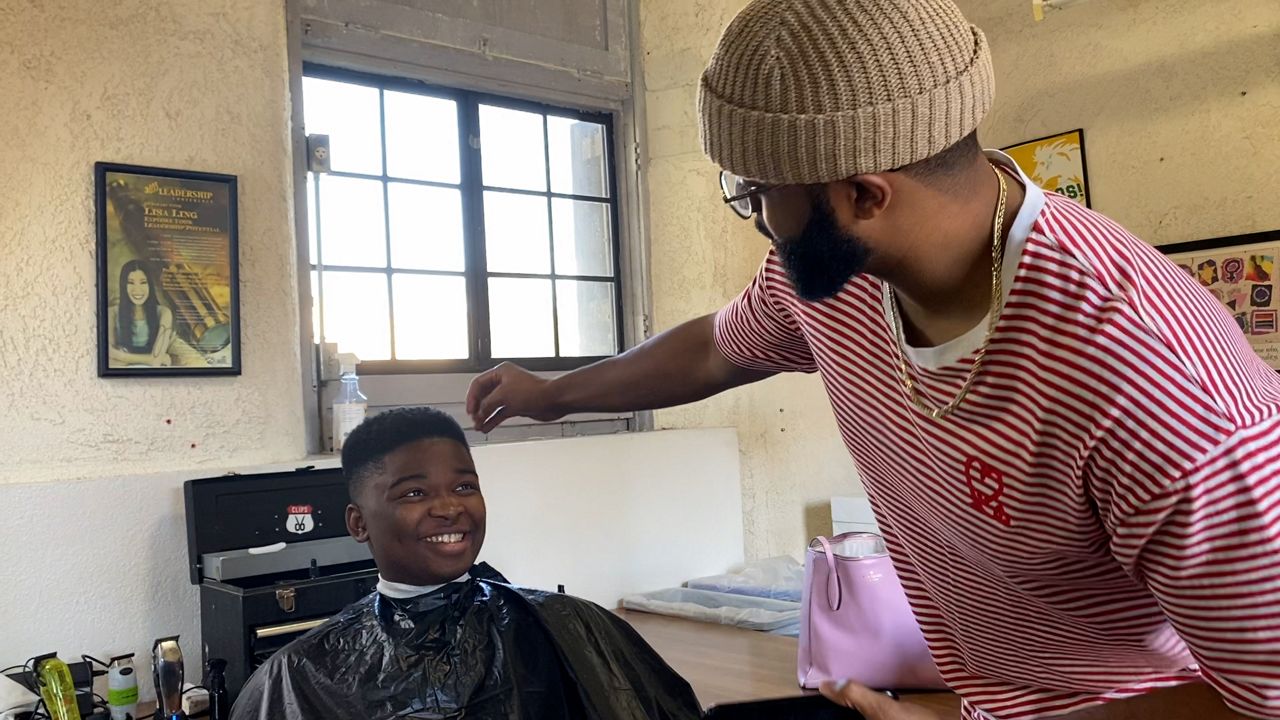 The Shop Talk is a pilot program that brings together Black students and faculty on campus at Cal Poly Pomona. (Spectrum News 1/Taylor Torregano)

Many students on campus say that lack of diversity has created an uncomfortable experience for them. To address this issue, staff have launched a new initiative called Black Men of Excellence, a program that offers a safe space for students.

The barbershop is a keystone of the Black community. It’s a place that even resembles therapy for many Black men. Physical transformations happen in the barber’s chair for 22-year-old Justyn Fulton, who said he feels like a new man after a fresh haircut. But emotionally, this is one of the few places the Cal Poly senior said can freely discuss who he is and the man he wants to become.

“That’s how we get all of our young brothers out here. Just get a haircut, chop it up, have fun,” Fulton explained.

They call it “shop talk.” It’s a safe haven where guys can see themselves in each other, but hardly ever can a student get a professional haircut on their college campus. The new program not only brings barbers to them, but Fulton said this is one place he knows he won’t be subject to the stereotypes and discrimination he faces as soon as he steps foot outside of the room.

“Oh, it is painful,” he said. “But like I said, all we have to do is just keep building the bridges and keep moving forward.”

Building unity is something Fulton said they desperately need at Cal Poly Pomona. As one of just 3% of Black students enrolled there, the communications major said he and his classmates have felt isolated and unwanted by both students and staff of different races.

It’s an issue Fulton brought straight to the senior coordinator of male success initiatives, Reggie Robles, who then spurred into action and partnered with co-lead James Rocker to come up with the Black Men of Excellence initiative — which includes The Shop Talk. It’s a pilot program bringing together Black students and faculty right on campus once a month.

“I also am an alumni, and so coming back after many years and now, taking on this role, I saw a need to create a space for Black men,” Robles said.

Though he identifies as Mexican and had a very positive college experience at Cal Poly Pomona, Robles knew he had to be part of the solution to a problem he heard from several Black students.


In addition to the free haircuts by local barbers, they also choose Black faculty to lead discussions on topics such as identity, mentor and leadership.

A recent conversation was about career readiness lead by Ronald Whitenhill, Cal Poly’s assistant VP for outreach and educational partnerships.

“Somebody to tell them early, ‘Hey, the skills that you have that are in your undergrad classroom, they’re applicable. The same thing that you’re doing today is what I do in my daily life,’” Whitenhill explained.

The more they connect, he said, the higher the chance of their success. Statistics show less than 20% of Black students who attend Cal Poly graduate in four years or fewer.

Set to finish this fall, Robles is beating the odds and says opportunities like these are crucial to help the students just starting.

“When you’re a minority on a campus, you have to be able to depend on each other,” he added.

The pilot program has already proven so successful that staff say they’re planning to launch similar initiatives to target other minorities on campus as well.