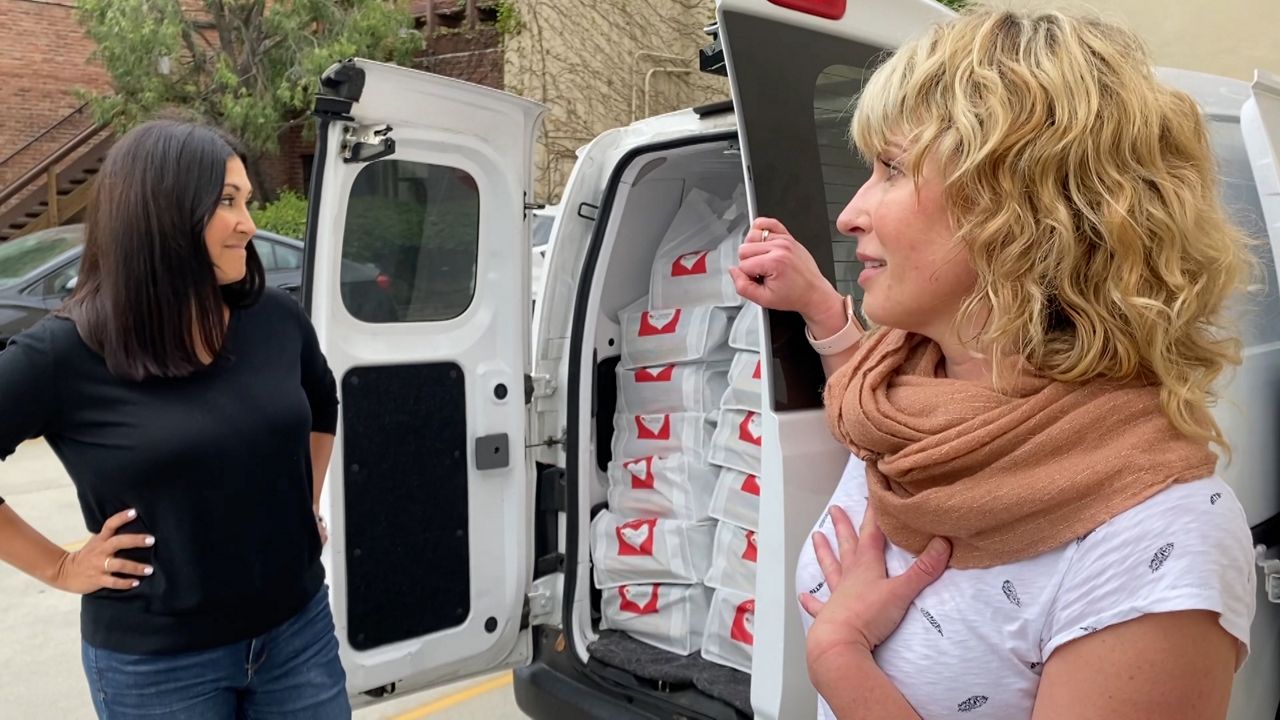 PASADENA, Calif. — Down in the basement of her Pasadena office, Keiko Feldman hoped she had enough books left to assemble eight additional tote bags.

Her shelves were less stocked than usual and that was a very welcome sign. The books that normally fill them are a curated selection of 16 titles, all of them telling stories of the LGBTQ experience.

“Beautiful, affirming, validating stories,” Feldman said as she moved along the wall, grabbed them one by one, assembly-line style, and placed them in a white tote.

Feldman knows just how important these stories are. Her younger son is gay and came out at the age of 15. Her older child, who is in their early 20s, came out as nonbinary.

“We’ve been doing this for a few years, so I feel like I was really prepared to be supportive and to be able to affirm their choices," said Feldman, referring to the nonprofit Gender Nation that she co-founded with fellow mom Morgan Walsh.

The friends met years ago when Walsh started a playgroup for what she called “gender creative kids,” kids like their own who weren’t seeing themselves and their experiences reflected around them.

Wanting to change that, the two moms decided to focus on the power of stories and have since donated their selection of books to school districts in California and beyond. April 21 marked their biggest delivery to date as they loaded a rented van with 140 bags of books — that’s 2,240 books total — bound for the San Diego Unified School District.

“It’s cleaned our shelves,” Feldman said with a laugh.

On the morning of the delivery, she and Walsh met early to stack the totes floor to ceiling. Before closing the van doors, they took in the sight of the stacks and were flooded with emotion.

It was Walsh who drove the van from Pasadena to San Diego and in her mind, she was carrying more than books. Behind her seat were bags filled with hope, comfort and empathy. Representation matters in all media she says, but when a child watches something on TV or in a movie, they see the actor playing the role. Books are a different story.

“A part of themselves goes into that character, right?” she said. “It’s all living in their imagination.”

The women don’t always get the chance to hand deliver the books, but when they can, they prefer it. They love meeting with librarians and principals and teachers, talking about their favorite titles, shepherding the books into the right hands and explaining how ideally they would like them to be displayed.

“We don’t need these books to live in an LGBTQ section of the library,” Walsh said. "We don’t need them to only be released only in June during pride month. These are books about the human condition and they belong on all the shelves year round."

Mick Rabin explained how he couldn’t agree more. As SDUSD’s Youth Advocacy Resource teacher, he has long wanted to get these books into classrooms. But purchasing the books at retail price would cost about $400 per set. When he learned Gender Nation could donate a complete set of books to each of the district’s 130 elementary schools, he jumped at the chance.

“We really want it so that our kids can walk into a school and understand that they are good just the way they are,” Rabin said.

In the end, it took Walsh and Feldman more than 18 months plus a two hour drive to get their books to San Diego. Looking at the culmination of all that work, they said proud wasn’t the right word to describe what they were feeling.

“Hopeful,” Feldman added. “Hopeful that these stories find their ways to the hearts that need them.”

If they’ve learned one thing from these books and from the journeys of their own children, they say it’s that labels don’t matter.  Having the space to safely discover who you are does. And they hope the precious cargo they delivered to SDUSD will provide that space.