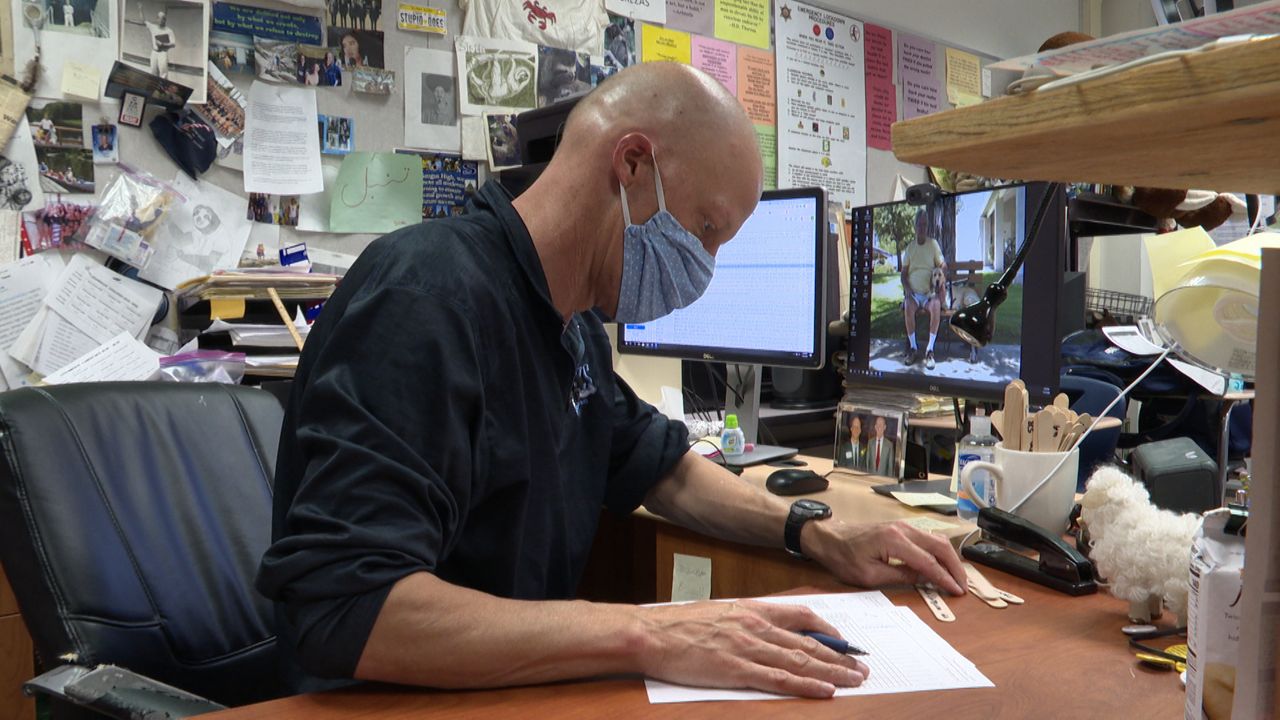 “I don’t think people go into the teaching profession hoping for medals and plaques and awards,” he said. “This is a campus that has so many professional, inspiring, heroic people that being nominated for this…for me it’s uncomfortable.”

Klipfel is one of five people recently named 2021 California Teachers of the Year. It’s the honor of a lifetime, but one he never courted.

“I actually told my boss to not allow me to be nominated, and he refused,” Klipfel admitted.

Rather than acknowledge any individual contributions he’s made to the school community, the long-time teacher deftly redirects the conversation, continually deflecting the spotlight onto his colleagues at Saugus High School.

“It’s just so important to me that we stress that the Saugus staff is extraordinary,” he said, after introducing one of his co-teachers, Momoko Russell, who also happens to be a former student of his.

“He was the one who inspired me to be a teacher when I was 16 years old,” Russell said. “The passion he exudes for what he does.  It’s not about the content.  It’s how much he fires up the kids.”

“Jim is perhaps the best candidate ever for this position,” she said. “He is such a phenomenal teacher, cares so incredibly for the kids. Couldn’t have been awarded to a better candidate.”

One gets the impression that, under any circumstances, Klipfel would feel uncomfortable with this attention.  But these aren’t any circumstances. The Saugus community is still reeling from the tragedy that unfolded on campus last year. A 16-year-old student opened fire in the courtyard. 5 students were shot, two of them fatally, before the gunman took his own life. Klipfel was one of the first to rush to the help the victims.

“When I knew there was a teacher who had gone out,” Coach Botton remembered, “it was immediately who I thought had gone out on that particular day. That’s exactly what Jim would be doing.”

Klipfel doesn’t like to talk about it. He says everyone on campus carries the trauma of that day and then, just a few months later, the pandemic hit. It’s been a lot to deal with, but he thinks the school community has lived up to the phrase seen all over campus: Saugus Strong.

“It’s just revealing the character and work ethic of these heroes,” he said.

Going through the various stages of the Teacher of the Year Program has been stressful for Klipfel.  “I wanted to make sure I didn’t let down my colleagues and students in this community,” he said, and he certainly hasn’t. In addition to being named one of California’s Teachers of the Year, he was selected to represent the state in the National Teacher of the Year program, which culminates this spring.

After that, he plans to keep right on teaching.

“I can’t wait until Monday. I love coming to work. I love serving kids,” he explained. “The idea of making someone else’s journey a little more successful, a little more positive, a little more enjoyable, it’s a natural high. So I’ll do it as long as I can.”

He may not have wanted to be nominated, but if something good comes out of this, Klipfel says, he hopes it shines a light on the community he's called home for nearly 30 years.

“This is a special community,” he said. “It was a very stressful six months, but also the honor of a lifetime to represent this community and these colleagues of mine. And any smiles it brought to Centurions and the community made it all worthwhile. It’s been the highest professional honor of my life.”