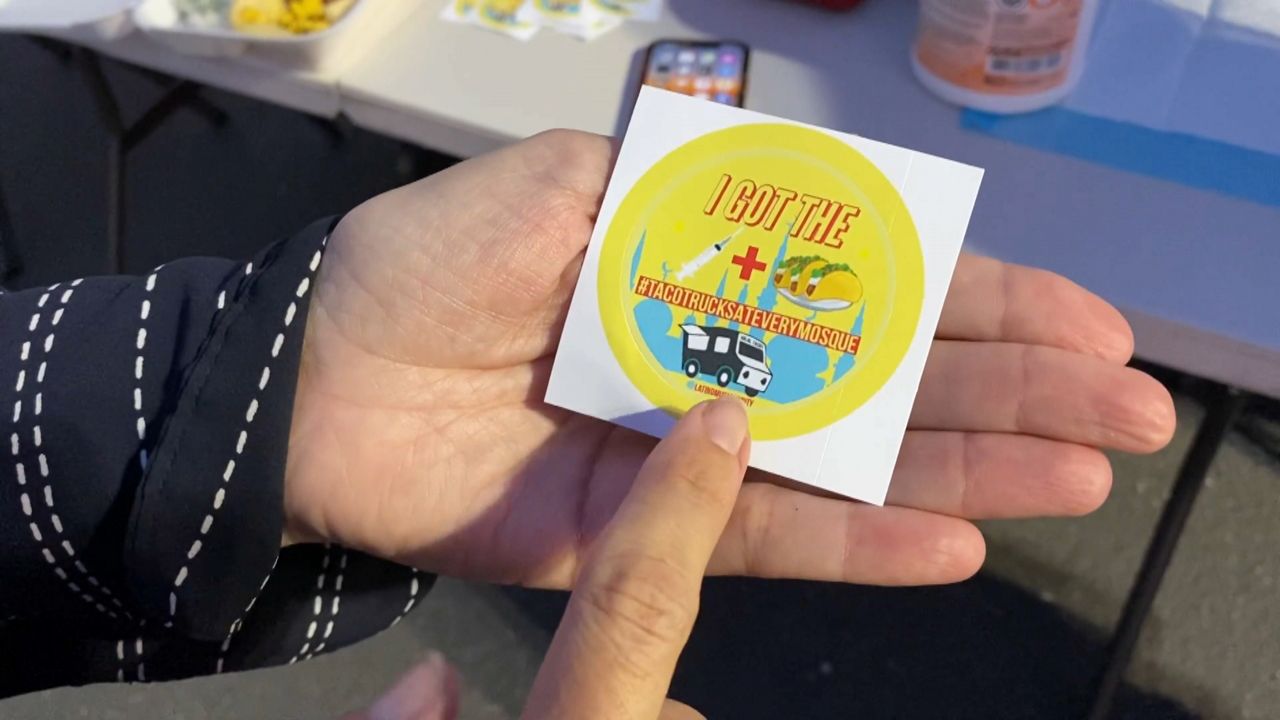 ANAHEIM, Calif. — Muad Eddali has a lot on his plate.

Eddali is an imam at the West Coast Islamic Center in Anaheim and a student at Irvine Valley College. With work, worship and school, he didn’t have much time to get vaccinated — until the vaccines came to him.

On a recent Saturday evening, four days before the end of Ramadan, Eddali was one of 200 people getting their first dose of the Pfizer Vaccine outside the Islamic Center.

“It’s close to me and because of Ramadan, I’m going to pray after I get the shot,” the 22-year-old said.

But what set this particular evening apart was that along with vaccines, there were also halal tacos offered, providing friends with an opportunity to have dinner and mingle safely outside. The vaccine and tacos event is part of a grass roots movement created by Rida Hamida, the founder of #TacosTrucksAtEveryMosque and the executive director of the Latino Muslim Unity Coalition.

Hamida is now adding vaccines into the mix.

“I saw that there was a need for intentional messaging in our community for us to get vaccinated," she said. "I noticed that our mosques didn’t do any outreach because they weren’t engaged with the health department."

Hamida saw that registration for vaccines was preventing some people from getting the shot because of language barriers and technological confusion.

“I advocated religiously," she said. "I asked the health department every day to please open up their doors and open up their minds and bring these mobile clinics in Orange County to our faith-based communities and to our neighborhoods."

Eventually the health department listened, and Hamida has hosted three vaccine and taco truck events so far, with more on the way. She partnered with Care Ambulance Service to bring vaccines to mosques.

For Lisa Carrillo, community outreach coordinator for Care Ambulance, the partnership with Hamida was a no-brainer.

"These super pods are intimidating for people who don’t venture out of their neighborhoods very often or aren’t comfortable out of their communities," she said. "This is the perfect opportunity to come and bring these vaccines to them."

Carrillo added that the best way to connect with people who might still be hesitant about the vaccine is to meet them where they are.

The Saturday evening event offered practicing Muslims a chance to get the vaccines during Ramadan.

"A lot of people were hesitant about getting the vaccine, even though it’s permitted by Islam to get vaccinated during fasting hours," Hamida said. "It made people uncomfortable. You’re supposed to have a good night’s sleep the night before. You’re supposed to be hydrated and have a meal before, but that’s not a luxury that people who are fasting have."

Hamida added that she wanted to give people an opportunity to get vaccinated, in way that made sense: at sunset, with food available in a safe comfortable environment.

“Our approach is definitely a celebratory approach," she said. "Every time someone gets vaccinated we say, 'Congratulations.' And I think that’s a different kind of experience than they were used to at the doctor’s office or at these super pods. They’re being celebrated and feeling a sense of accomplishment when they’re getting vaccinated."

After waiting in line for less than ten minutes, Eddali received his shot.

“We should all get it, to save lives,” he said.

During his mandatory 15-minute post-vaccination wait, he poured green and red sauce over some halal tacos, sprinkled cilantro on top and took a bite.