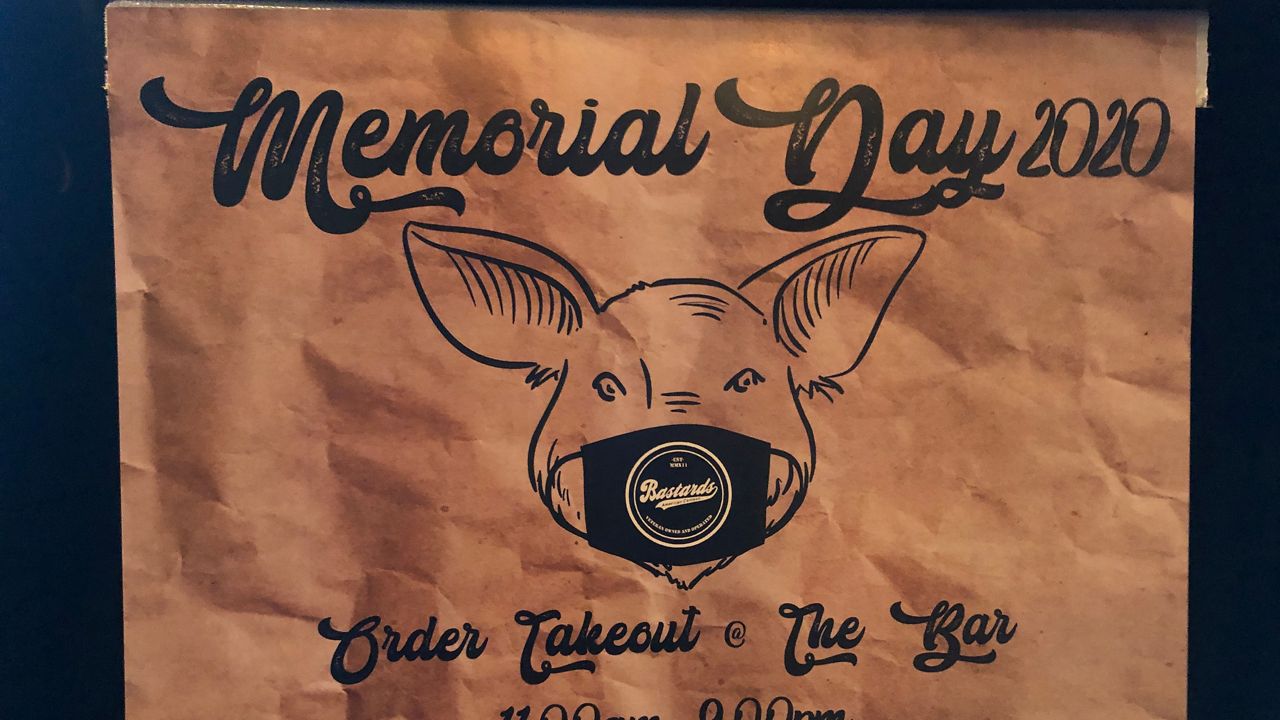 DOWNEY, Calif. – Opening up for lunch service at Bastards American Canteen in Downey looks a lot different today than it did eight weeks ago.

For co-owner, Nick Velez, it's less about setting out tables and chairs or welcoming in customers, and more about getting customers to order at all.

“It’s definitely weird," he said. "Never in a million years did I ever envision anything like this.”

As he prepares for to-go orders and curbside pickup, it's still setting in that this is his new normal. While the last two months have been rough on the entire restaurant industry, Velez has tried to find a bright side.

“You always gotta prepare for the worst and pray for the best right?” he said.

And that's what he and his co-owner Manny Maeda have done to get through the past two months. Rather than closing their doors when the stay-at-home orders first went into effect, they immediately began brainstorming.

“We said, 'Hey, we need to come up with a plan of attack,'" Velez explained. "How we still offer our brand and product to the local community, remain relevant, and still stay in the fight during this pandemic?”

Their first step was letting the community know they were still open and social media branding has played a huge role.

With more potential customers at home and online, Bastards' has seized the opportunity to rebrand and focus on showcasing their top products and new specials.

🇺🇸Happy Memorial Day 🇺🇸 From Us At Bastards. We Are Open & Ready To Serve You🙏🏼 Order Takeout At The Bar From 11:00AM To 9:00PM. Don’t Miss Out On Our Specials & Our Fresh BBQ Smoked Onsite At Bastards 🍖🍗🍔🍻🔥 _____________________ Menu + Cocktails & more available through 👉Curbside Pickup & Delivery- 11:00AM to 9:00PM Monday - Friday 9:00AM to 9:00PM Saturday - Sunday + We are now available through UberEats, Grubhub & Postmates 🚘 ________ Orders may be placed up to 2 days in advance. We are happy to serve our community. Stay safe & be healthy! - Order now select the link in bio- #bastardscanteen . . . #bastardscanteen #downey #downeyca #beer #wine #restaurants #food #laeats #losangeles #delivery #takeout #familymeals #laeats #downeycalifornia #partytrays #bbq #bbqplates #service #veteranowned #business #grubhub #yelp #downeymeals #sunday #funday #thirsty #familypack #memorialdayweekend #memorialday #brunch

“If we’re gonna compete with the Shake Shacks and the bigger companies, we have to remain as relevant and as competitive as they are," Velez said.

That emphasis on branding has kept them in the fight so far, but Velez knew larger-scale changes also had to be made. And so, starting Memorial Day, Bastards' will transition to an order-at-the-bar format — with fewer customers allowed inside and fewer employees roaming the floors.

By embracing a more to-go centered, fast casual format, he's hoping to bring in new business as dining habits change. And while it will be different in layout, Velez is confident that it will always carry the same vibe.

“It’s more than a home for my staff and my community, it’s a home for the veterans in the community," he said.