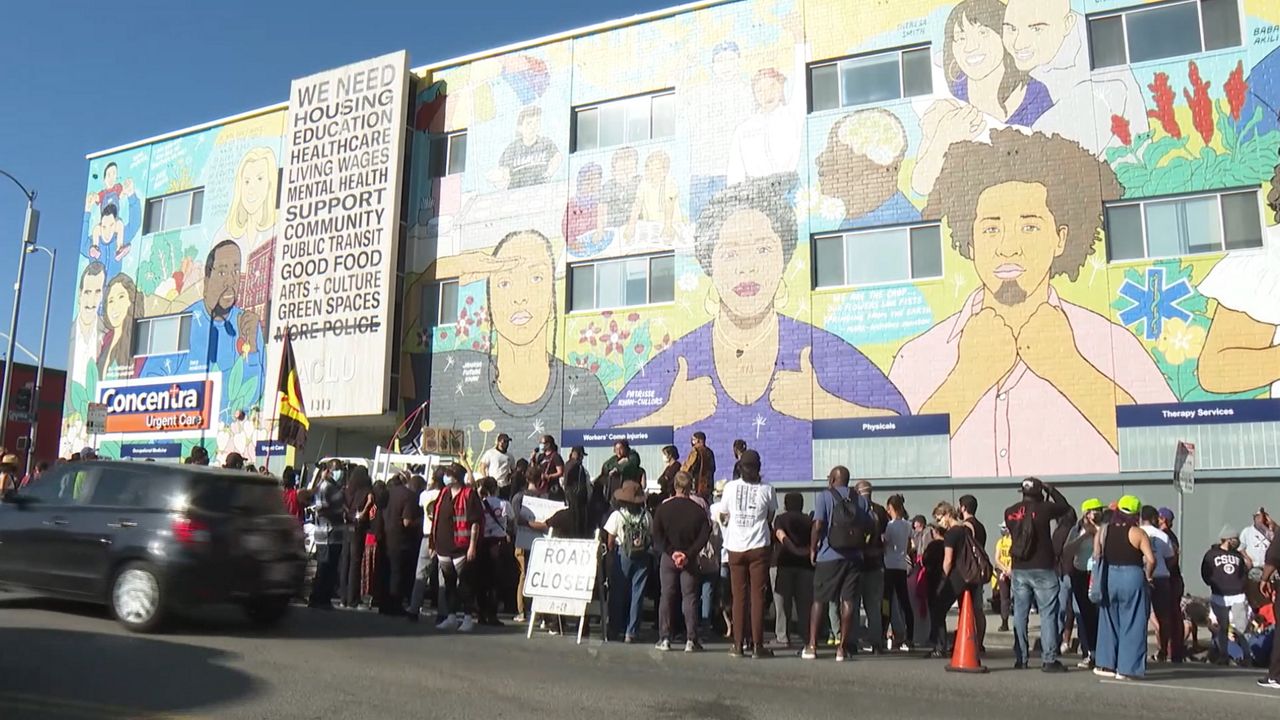 LOS ANGELES — The ACLU of Southern California recently got a makeover. With the building being a frequent site for protests against police violence, artist-in-residence Audrey Chan decided to create a mural honoring local social justice activists. Chan said she felt the depictions to be a perfect fit to go on the building located across the street from the L.A. Police Protective League. 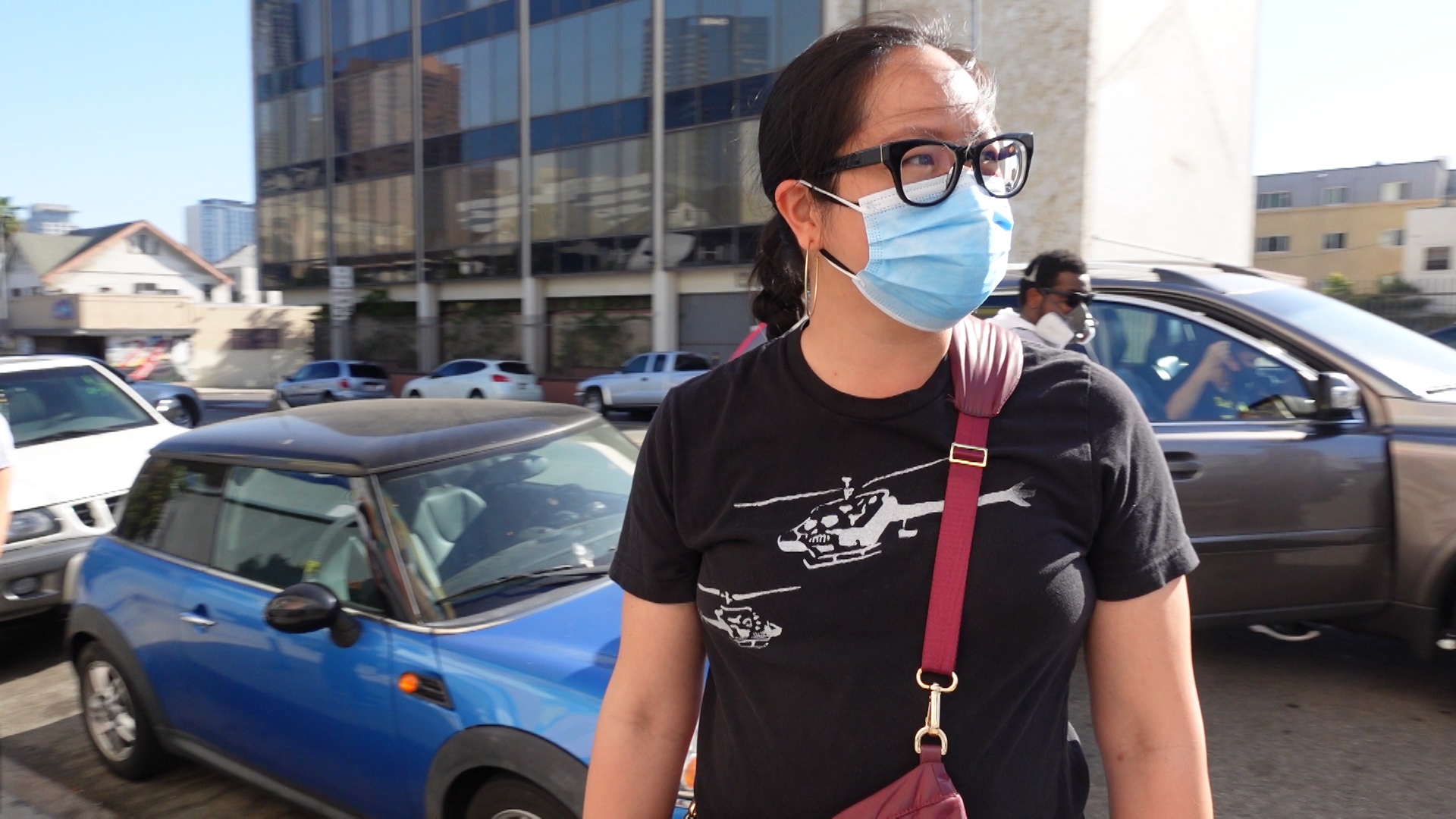 "When I was choosing a really vibrant color palette that's used in the mural, I really wanted to capture the difference of the different people from an incredibly diverse cross-section of Californians who devoted their lives to activism and organizing," Chan said.

The mural is called "The Care We Create" and stands three stories tall. It all started as a photo. Taking inspiration from nature, Chan prefers to select colors she finds in the community she's representing to feel connected with the images and layers she's soon to create.

"A background is so important to unify the images of community that I'm trying to create," Chan said. "I come to parks like this where you can really see communities of color just experiencing joy where there are green spaces where people can enjoy time and nature even within a big city like L.A." 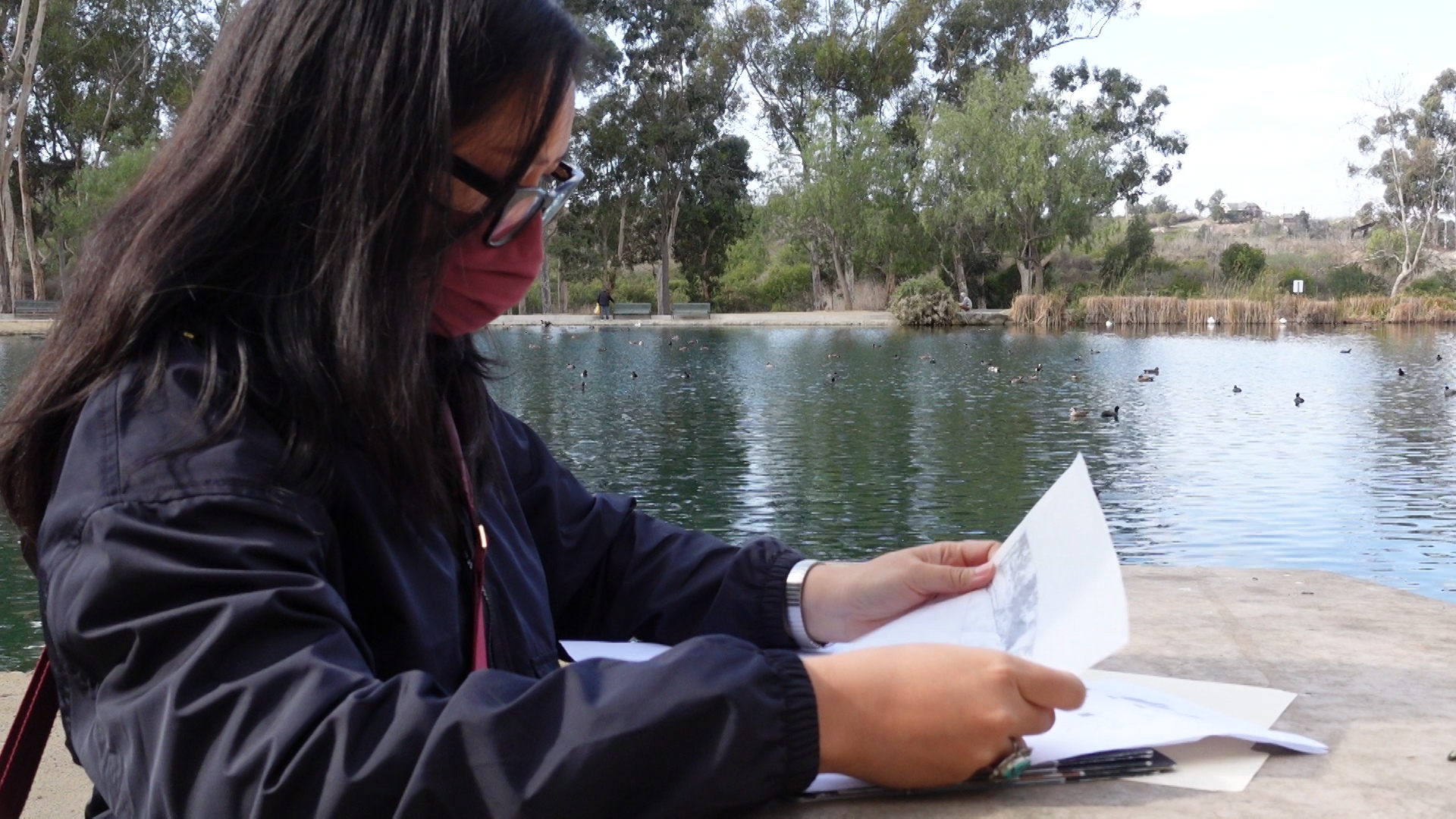 Growing up just outside Chicago, Chan moved to L.A. when she attended CalArts and was inspired by artists like Maya Lin, who also grew up Chinese-American in the Midwest. Exploring Los Angeles's lesser-known histories, Chan wants to engage the politics of our time and ultimately change the way we view monuments.

"I'm really inspired by hand-drawn cell animation, and so to capture that sensitive line work that uses crisp black outlines and flat color, I work digitally," Chan said. "I make my drawings that can feel like sketchbook drawings, and I translate them into vector graphics that can be scaled up."

Dr. Melina Abdullah, a co-founder of the L.A. chapter of Black Lives Matter, is one of the activists depicted in the mural. 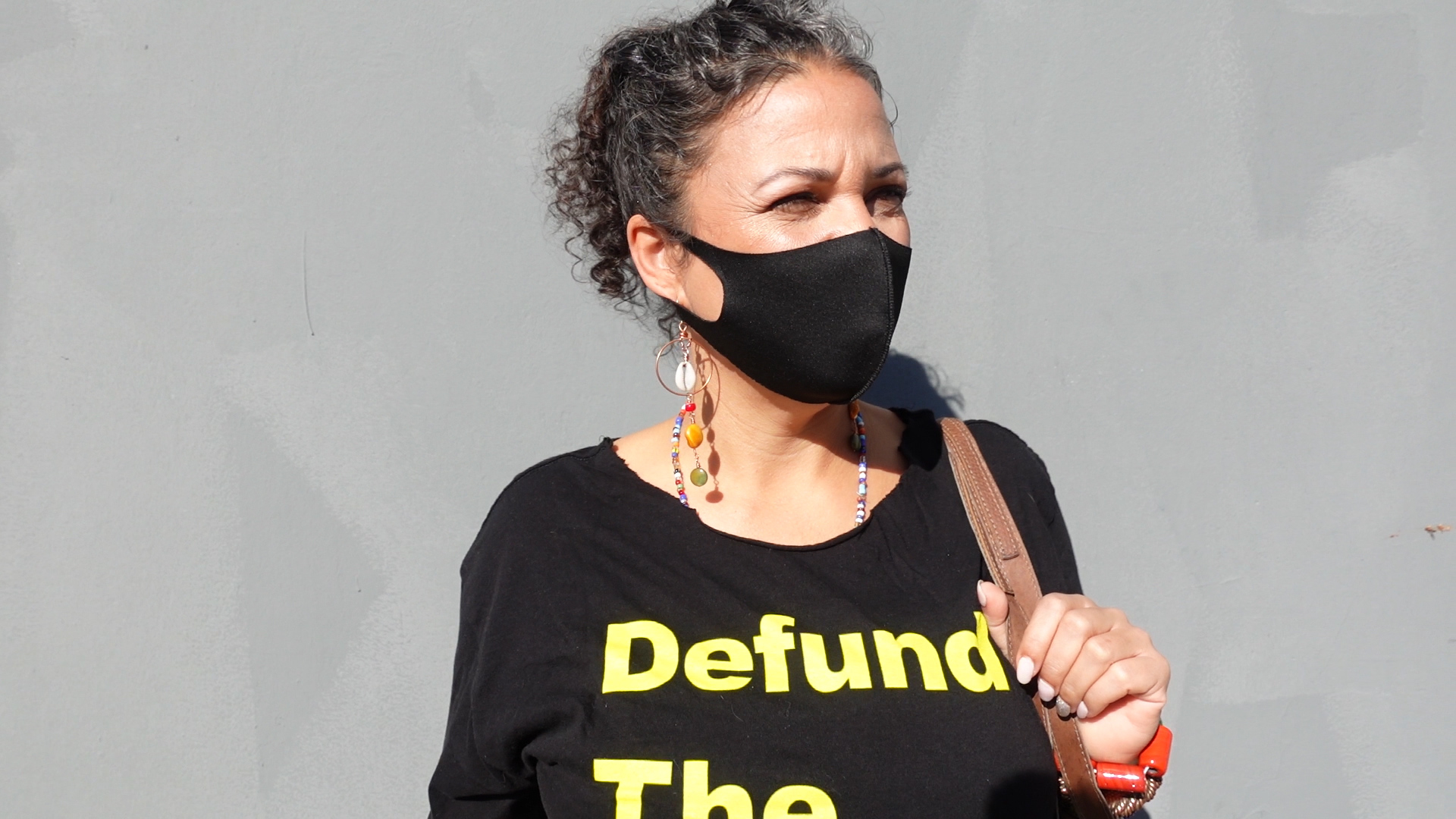 "Some of us can speak and speak to people's intellect and try to convince folks with words that we need to move and do work,"  Abdullah said. "But art has the capacity to really bypass all of that and speak directly to people's souls and emotions and spirits." 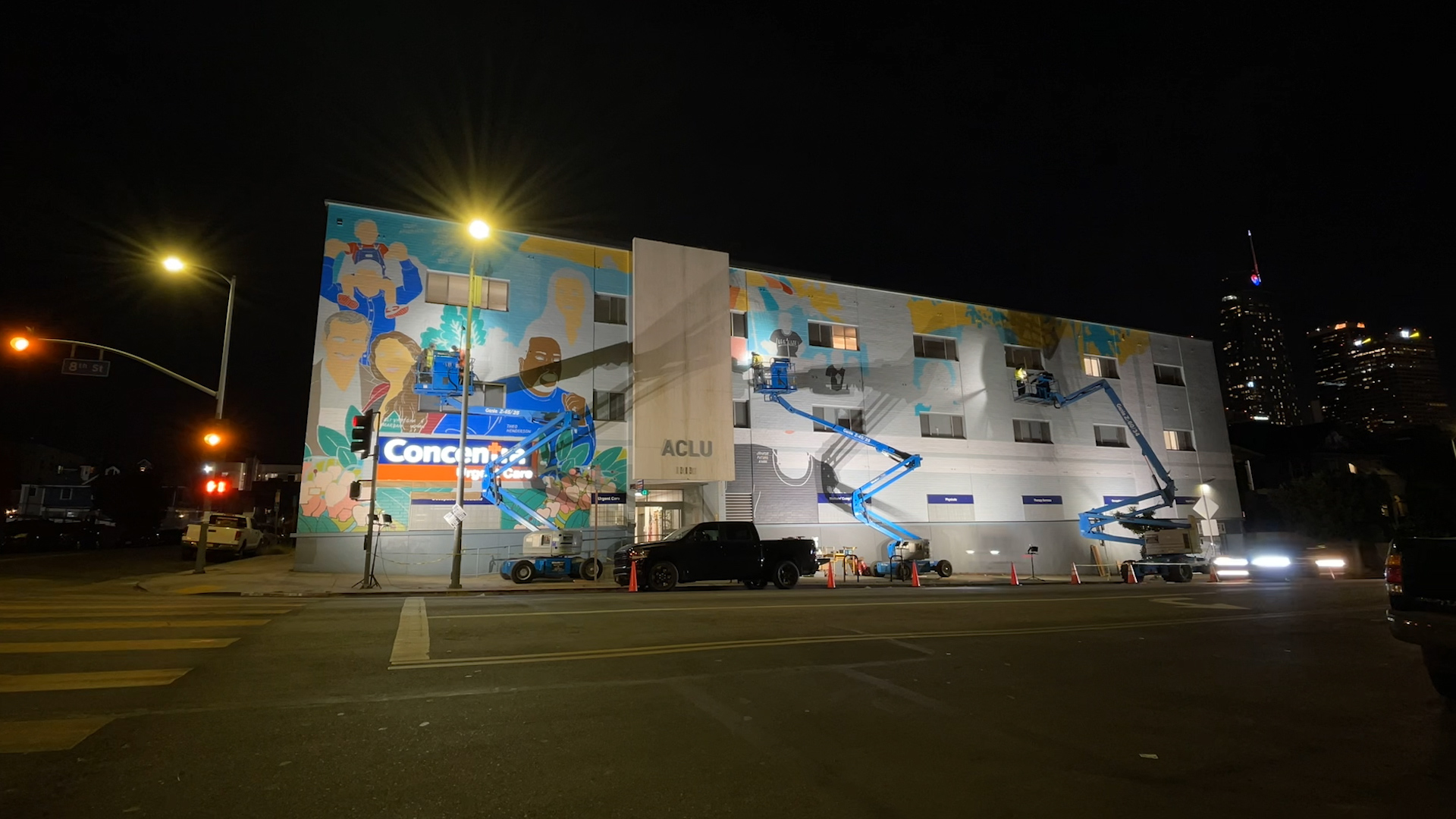 "It just goes to show that we all have a role to play in the work of making our society more just," Chan said.

A post shared by ACLU of Southern California (@aclu_socal)