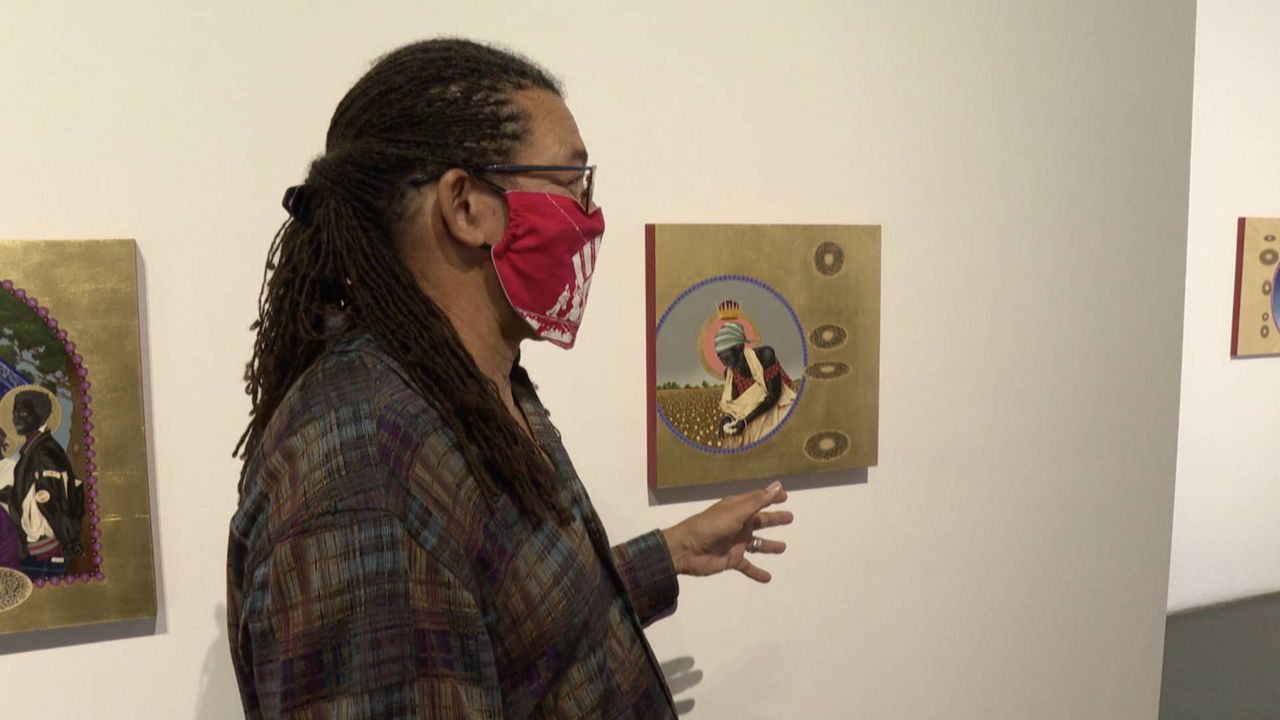 The exhibit opened September 19 in Santa Monica and runs through November 28.


“This is always a magic moment for me, whenever I see all of my pieces up at the same time," said Greenfield. "It’s like a family reunion."

With acrylic paint, ink, and gold leaf, Greenfield made 28 pieces. He refers to some of them as contemporary icons.

Greenfield was born in Los Angeles and grew up Catholic, seeing images like the Madonna. In his work, though, the Madonna is black and in the background is a stark revenge fantasy.

“Sometimes people can’t get a grasp of the significance of something until they see themselves as victims," he said. "Once you see yourself as a victim, then possibly you could develop some sense of empathy."

Greenfield is friends with the gallery’s owner, William Turner. Surviving on a six-month rent deferral and a ten-person indoor limit, Turner has a lot riding on this.

“It kind of did what art does best to me, which is create a discussion that can only be done through the image of art,” said Turner.


There’s a mix of real and unreal in the collection, as Greenfield chose to depict a few historical figures and events. While this exhibit has been years in the making, it’s in sync with some of the conversations happening right now.

“A lot of it goes back to the talk that your parents have to have with you at one point or another, basically telling you how to act around law enforcement so that nothing bad happens to you," said Greenfield. "But unfortunately, sometimes it does."

For many years, Greenfield said he worked for the L.A. Police Department as an artist, drawing schematics and training materials. He’s also been on the other side.

“I was pulled over by cops quite often for absolutely no reason, and I think the only thing that is different now is that a lot of times it’s recorded,” he said.

Rather than more viral videos, Greenfield has created something new to look at — something centered on race in America.