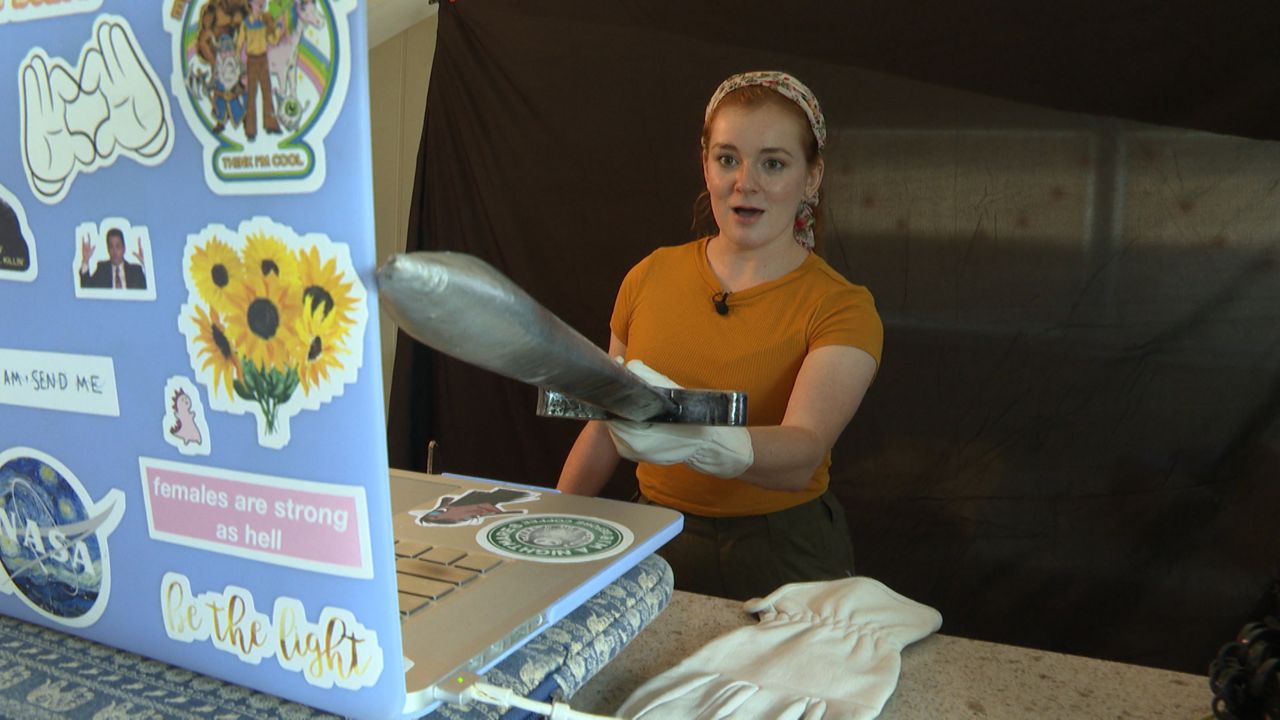 WESTCHESTER, Calif. – Kylie Sullivan knows how to take a punch. Or at least, she knows how to make it look that way.

Sullivan is a theatre arts major at Loyola Marymount University, where she says she's been "deeply invested" in studying stage combat. She had been putting those skills to use in LMU’s spring production of Qui Nguyen’s She Kills Monsters, a "Dungeons and Dragons" themed play full of fight sequences and swordplay.

They were about to go into tech week when the pandemic shut everything down.

“I felt like I just lost a part of myself and it wasn’t ever going to come to fruition," she said, adding that she was so upset, she could barely get off her couch for a few days after the show was canceled.

Director and theater arts professor Kevin Wetmore said at first, they thought the campus closure would last a few weeks.

He also expected the outdoor summer program he runs, Shakespeare on the Bluff, would be canceled. But he says he received a call from the dean about how the cast of Saturday Night Live was doing the show from their homes.

"Can we do that with Shakespeare?" Wetmore recalled the dean asking. And ultimately, that's what they did, leading him to wonder if She Kills Monsters could be brought back to life.

"The summer was our experiment that taught us we could do the fall," he said.

"I was wrong to doubt, Kevin," she laughed. "Kevin is always super creative....but I couldn't see how we create such an action-filled play over Zoom."

Wetmore wasn't entirely sure himself but he was willing to try.

“As Ray Bradbury said, 'jump off the cliffs and build wings on your way down,' and that is what we did,” he said.

Building those wings required research and Wetmore, a self-proclaimed geek who still has his original childhood "Dungeons and Dragons" books turned to what he knows: comic books, anime, and martial arts films.

“You don’t necessarily see swords crossing. You just see the result," he explained. "So looking at manga such as this, looking at martial arts films based on it, were one of the ways we were able to stage the fights that we staged,” he said.

Sullivan says it all comes down to timing, since you can't connect with or even necessarily see your fight partner.

"You have to rely on a rhythm you set before...knowing that your partner is going to catch up," she explained. "You can’t watch through Zoom. There’s a bit of lag."

But on the bright side, she said, this version of stage combat is less physically exhausting and since no one can accidentally make real contact with her face, she actually feels a little safer.

The same can't be said for her computer.

“I have knocked my computer a couple of times," she admitted with a laugh, "but I’ll usually catch it.”

They also worked with the Zoom technology, strategically turning cameras on and off during combat sequences, essentially live editing as they go.

Reworking the play for a virtual platform created its own challenges, but just like in D&D, Wetmore and the cast rolled the dice.

“We have no control over the pandemic," he said. "All we have control over is what kind of art do we make in response to it.”

“It’s a new form of media that we can definitely make use out of," Sullivan said of the Zoom platform. "There’s still a lot of art that can be found within it.”

And at the end of the day, creating art had been their quest.

She Kills Monsters will be presented virtually via Zoom and YouTube live at 8 p.m. September 9, 10, 11 and 12. Tickets are free.